While most events have clearly indicated outcomes, some are secret. This guide tries to collect all of them.

There’s already a different guide up for this one.

You get 3 candles. After an unclear amount of time (seems to be 2 fights), Dante returns.

Dante joins you, giving you a card and a relic that gives 2 magic power per Blight.

Note that the Deidweight card is also a Blight, and events can add more Blight cards.

Enemies can also add Blight cards to your deck in the form of Vengeful Shards.

The Multistrike adapts to the amount of Blights you currrently possess, so aiming for more Blight cards is a must.

Dante is insanely powerful, and can carry a run on his own if you can stack some damage on him and/or give him quick.

The Blackmisth will offer you the choice between these 2 cards: 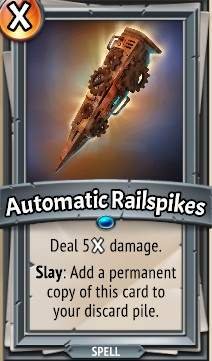 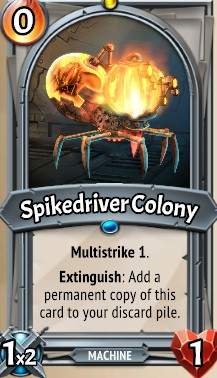 The Spikes create a copy of themselves every time they Slay. She informs you she’ll upgrade them once you have 4.

After the battle where you get the fourth, she’ll show up and upgrade them with +10 spellpower and Consume. This fills up an upgrade slot, so make sure to upgrade them first, preferably before you make copies. Since they will no longer duplicate once you have a minimum of 4, you might want to try to get up to 3 and then spend a battle getting as many as you can, since they become at minimum a 0 cost deal 10 spell with Consume.

Spikedriver colony is currently unknown, suspected to be similar.

An abandoned Clipped will ask for either a Spell or Creature.

If you do, he returns it an undetermined amount of time later with an upgrade.

Don’t use your bad cards for this or you will be sad. For a creature I reccomend something small and killable if you have the space to cycle the extinguish. Tank can work as well.

For the spell, remember that it can fill up your hand if the battle lasts long.

The Abandoned Stave does what it says on the tin. 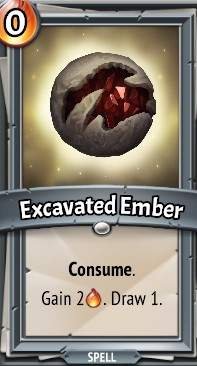 This can be a good event, mostly dependent on your energy needs versus your draw. All the energy in the world doesn’t help if you keep drawing these dead cards. Skipping is always an option.

There’s an event that lets you choose to get a Consumable card from 1 of 3 factions. When you do, there’s a chance that the store collapses or that you get to pick from another faction. No clue what determines the collapse, but usually you will get only 1 card.

There is a low chance that you can get the third chance, only had it happen once so far.

When you come across a battlefield, you get to pick the Shield, Sword or Skull. If you hold onto it for several battles you will receive a Relic: ‘Hope for Peace’. All Purge effects become Consume instead.

Umbra is really fun, it’s also kind of garbage. You can win, but generally their Champion underperforms and they’re the most hampered by mechanics (You can increase the room size, but are still limited to 7 units) and scale too slowly.

Unlike Snecko in StS, Volatile Gauge isn’t too great. If it works you dominate, but it’s hard to build your deck around it properly. Works best with Stygian (high cost spells), Hellhorned (having 5 Consumer of Crowns for free is hilarious) and Remnant (Reformed units are still free). Very fun, but don’t pick it expecting to win.

Pyre related relics are a punch in the dick every time they’re offered. They’re not really worth it, although Vapor Funnel can save some damage.

Pyre hp in general is irrelevant, if things get to your pyre either ssomething’s gone wrong or their damage output is too low to matter. It’s a resource, get comfortable spending it.

All basic cards are garbage and should be removed once a better option has been added, except arguably Dregs since they remove themselves. Consume is a great cheap way to get rid of spells and still get some value out of them.

Thornfruit (Sting generating relic) can be a trap. Be aware that against Seraph the damage is irrelevant most of the time and it clogs up your hand.

There’s at least 2 broad ways to play any Clan even before you add a secondary except Umbra.

Don’t count on getting any specific relic, you’ll often end a run with a bare handful.

One event has you find his corpse and take one of his tools. His Hammer, his ‘History of the World’ (which seems to be where all the commenatry comes from), or ‘Frozen Nostalgia’, which is a pendant featuring a picture of the Champion Forge lady, his daughter.

The Abandoned Stave, along with one of the Pyre upgrades, makes it clear that Fel the boss was his companion and probably lover. Her dialogue references her regret as well. Light’s Gift probably references Fel as well.

Useful tactics and tips aimed to help players who might be struggling to progress up the covenant rankings. ContentsGuide to Tactic and Some Useful TipsIntroductionTacticsMonster Positioning and UpgradesTrain Stewards are […]

Elevate your game to the next level with this highly informative guide on Monster Train’s ultra secret unlockable clan, the Melting Remnant. ContentsGuide to Melting Remnant ClassIntroductionHow Do I Win?Champion […]