Guide to Air Warfare in Hearts of Iron IV

Starting off with my least recommended doctrine it is the operational integrity air doctrine. Tactical Bombers are just worse cas and worse strats. But sometimes multiplayer games ban strat bombers and you have to replace them with tactical bombers.

It could be worth it to build as Germany to bomb forts in France or Soviet Union without using so much production or as Italy to bomb islands and ships. 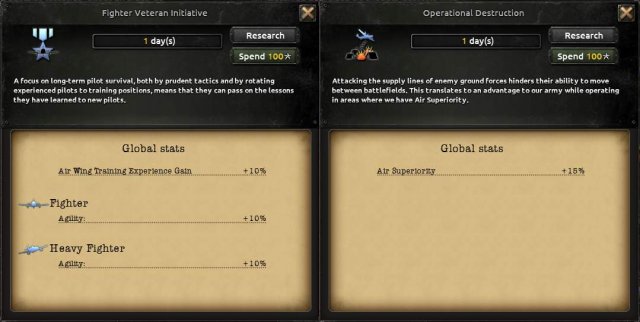 Battlefield support is for cas and air superiority. The only issue is that your planes will be out matched by the 10% agility from strategic destruction and operational integrity. In a multiplayer game as Germany you can make up for this by get level 5 engine with air xp from the Spanish civil war and the Sino-Japanese war before the allies have enough air xp to build level 5 engine fighters.

The main goal of this doctrine is to use cas but you need fighters to cover your planes other wise they are going to be shot down. AA inside of divisions count the cas support by percentages depending on how much air attack the division has. So in a no air Russia your cas will probably be countered by AA but it will still do some damage and even if you lost the allied air war you can still put your cas up. 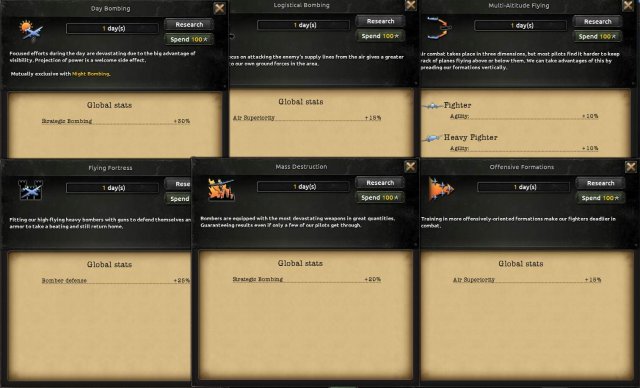 Most air controllers take this doctrine because they are either microing bombers or changing fighter groups as needed to keep air superiority.

Heavy fighters have more of everything compared to normal fighters except agility the most important modifier for fighters. This makes them good at fighting strategic bombers but you could just build normal fighters instead of wasting research.

This is an even number of planes even though heavy fighters cost more to produce. So you should just stick to normal fighters unless your fighting in the pacific where the air bases are small and far or if you need escorts for strat bombers.

If your mp game allows it you should build strat bombers as the allies because it will ruin the axis economy and if you expect to win the air war as the axis you could build some after you win the air war against the allies to bomb Russian or English industry. I would stay away from tactical bombers unless you cant build strat bombers. And I would stay away from heavy fighters unless you really need the extra range. Cas and Normal fighters will always work out if you produce enough of them. And finally for naval bombers well uh… you want them you can build them.

Examples of division templates. I recommend using them but in the end, there are also tips for designing your templates. ContentsGuide to Division TemplatesInfoInfantryTanksSpecial Infantry (Mountain, Paratropers, Marines)Mobile DivisionsSupport CompaniesStats […]