This guide showing you how to complete the “Kill 2 soldiers using grenades” objective in Mission 11, Suburb of The Damned.

How to Complete the Objective

As many of you, I wanted to obtain 100% completion in the remake of Destroy All Humans. In the mission Suburb of The Damned, there is an additional objective that I and many others have had trouble with. After playing the mission for over an hour, I have studied all the ins and outs of everything you need to know to get this objective and get one step closer to 100% completion.

Mission 11 is split into 3 parts, the final part is where the grenade objective is available. If you succeed the mission, you will have to play through the entire mission again just to get to the same spot you were at.

Missions in Destroy All Humans have checkpoints, this means if you kill yourself before the mission is completed, you can have a shot at the same section of the game without having to play the entire thing again! I’ve found that a good time to kill yourself is around 0:30 remaining on the timer, this should give you enough time to die, while also allowing you as much time as possible to kill the soldiers with the grenades.

Note: You can also allow any tower to be destroyed to avoid dying.

A main problem that I’ve had with this objective is getting grenades to spawn at all! Luckily, I’ve found two ways to get grenades.

From what I’ve found, soldiers only throw grenades if they can not physically see you. You can get soldiers to throw grenades by hiding behind a building or by flying up in the air really high.

This method is unreliable because soldiers won’t always throw grenades. If you’re behind a building, they may try to flank you. Flying works better for this strategy, but it doesn’t work all the time. Keep trying until you get to 30 seconds remaining.

This method is dangerous because if any tower gets destroyed, it’s mission failed.

It’s important to try each method and see which one works best for you. I got the achievement myself with Method 1 while flying.

A lot of people, including myself, thought that the grenades were broken and that this objective was bugged. This is actually incorrect as grenades are weaker than we originally thought.

Grenades only do 50% damage on soldiers.

That’s right, a grenade by itself won’t kill a soldier. What’s actually happening is that the grenade flings the soldier into the air, then he is killed by fall damage. A kill from fall damage does not count as a kill with a grenade.

After you grab a grenade, use your Zap-O-Matic to shock a small group of a few soldiers and get them to half health. Once their low, throw your grenade and finally complete this objective.

If you followed the steps above, you should be able to finally get the long-awaited 3 stars on Mission 11. You can view your accomplishment in the archives. 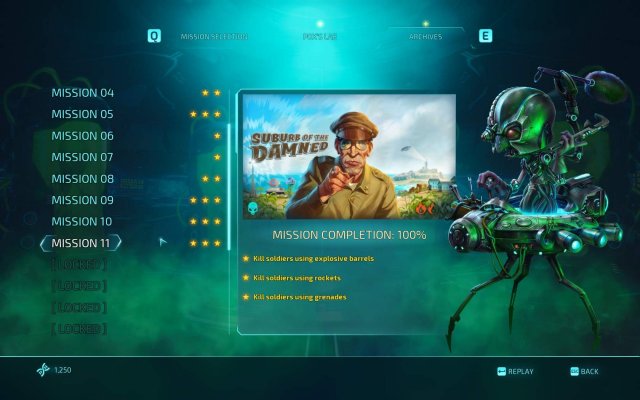 Destroy All Humans! – Useful Tips and Tricks (Gameplay and Issues)

Tips for Players Issues Save file location Save game files are located in: %USERPROFILE%/AppData/Local/DH/Saved/SaveGames Where to find the engine.ini file to modify C:Users[user]AppDataLocalDHSavedConfigWindowsNoEditor in engine.ini How to disable Motion Blur […]

Destroy All Humans! – How to Obtain Pyrokenesis Achievement

Destroy All Humans! – How to Obtain Do Feed The Sharks Achievement