This is a guide on how to pass the Noise game. The main principles of the receiver’s work will be discussed here, as well as the regulations on how to pass the main plot of the game. Places with additional rooms will be displayed here – you’ll achieve the Steam level after your discover them.

After seeing the intro, the main character appears on the forest path. You need to go ahead and listen to the introductory monologue.

Soon the protagonist will get a flashlight. You can switch it on and off with the left mouse button. When the flashlight is on, you can zoom in the image using the right mouse button. 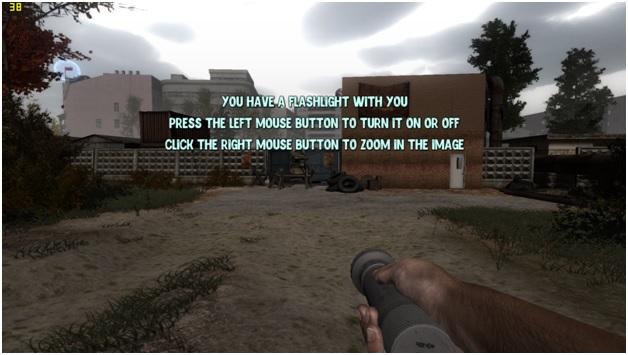 You can switch between the lamp and the radio using the Q button.
The receiver can be turned off with the left mouse button. A red light on it indicates if it is on.
Many puzzles in the game are tied to the use of radio and wave settings. To switch the wave, use the mouse wheel – it can be turned in both directions. Switch it until you hear a signal without hesitation. It can be a radio station or noises from some objects. Switching waves is looped, so even if you turn the mouse wheel in one direction, the signal search will automatically go around in a circle. 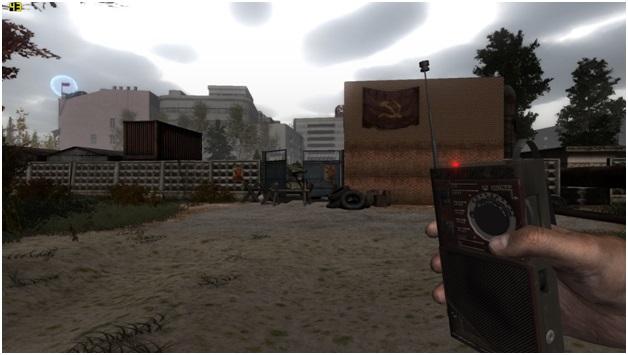 If you catch a signal, you can try to figure out which side it is coming from. To do this, you can simply turn on one spot. The signal is coming form the side where it is stronger.
This is not obligatory:
One of the caught signals comes from a checkpoint (a brick building with a flag). Go inside and climb the stairs to the second floor.
Here you can listen to the audio recording. 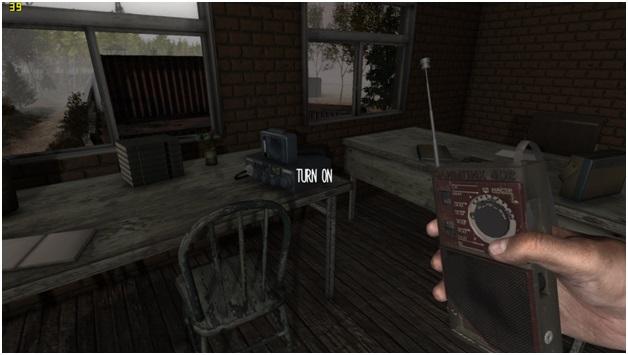 Now go along the fence along the path until you come across a strange sphere that has formed a hole in the fence.
Go inside.
This is another important part of the game. These spheres (they are called “breaches” in the game) form a connection with a certain time in the past or the future within themselves. Going inside, you can listen to the dialogue of people who were talking at this place some time ago, or interact with the subject, thus influencing the course of history.

Go inside the breach and try using the receiver (it should be on – then the red light is on) to tune to a signal that you hear only inside. 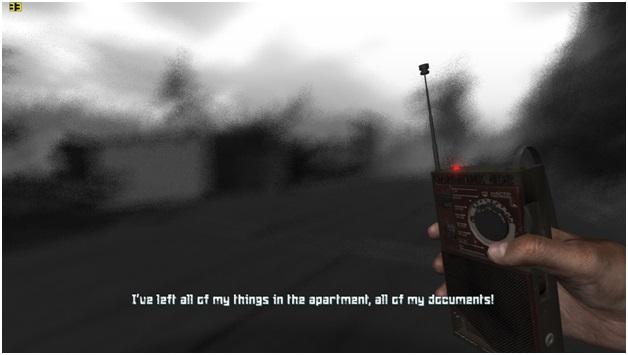 Some breaches do not contain any dialogues or active objects inside, for example, the one you passed through in the fence. 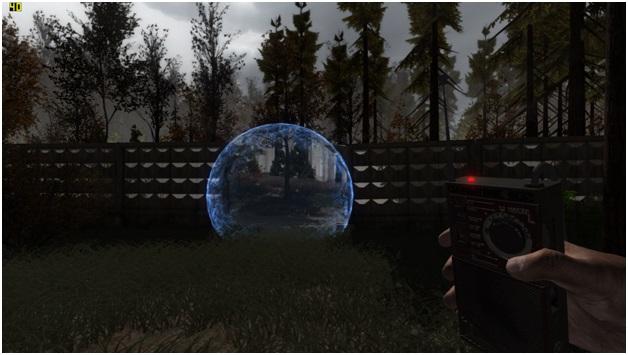 This is not obligatory:
Look at the roof of one of the buildings. The Russian flag is visible in the breach, although, the scene of action is the USSR, 1988. 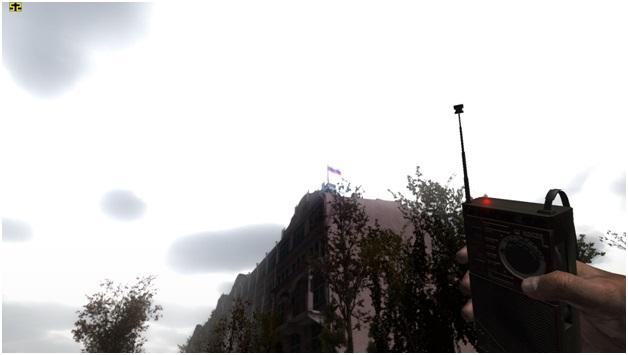 On the left side there is a gate to the workshop. Go inside and listen to the dialogue in the breach. Try to open the door to the basement. It is closed. In the dialogue, the key from the basement and the place where it has been left are mentioned – on the table, next to the flowers. 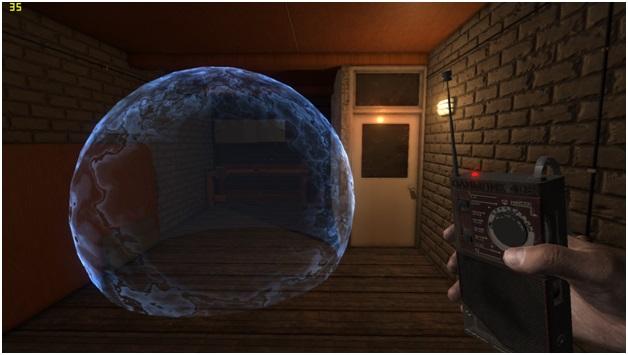 Leave and keep on going along the area. You’ll notice the burning Zil. Approaching closer, the protagonist says that this seems to be an important building, but this truck blocked the way into it. 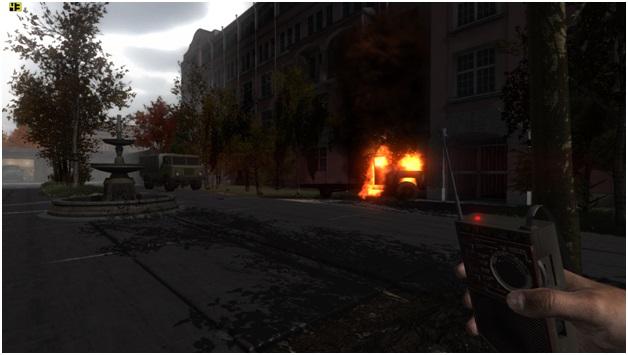 You can skip the first building. Inside there are breaches with dialogues in different rooms. You can listen to them. 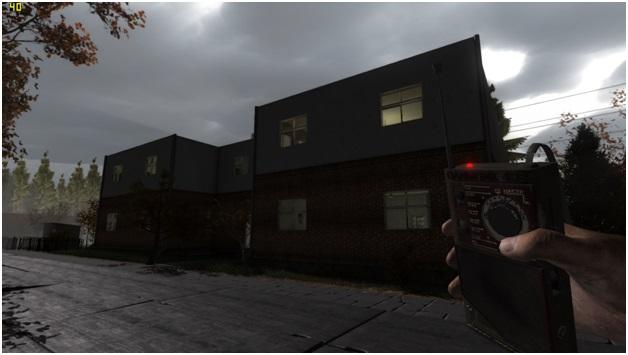 Go to the second building. 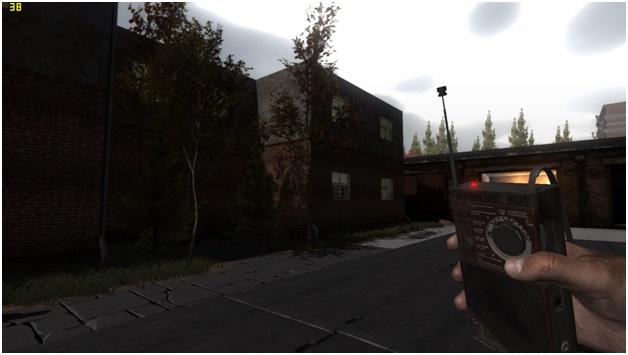 This is not obligatory:
You can enter the apartment to the right of the entrance on the first floor. The phone rings in the kitchen and the door is closed. You’ll find the keys. They are lying on the table (on the screenshot on the left) and you open the door. Go in, talk on the phone. 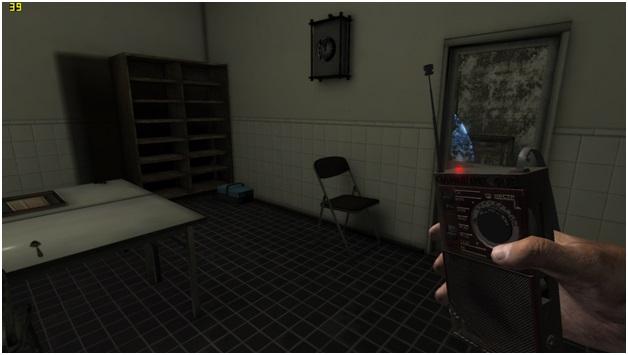 Next you’ll come to the second floor. Go into the apartment to the right of the entrance of the building. Listen to the dialogue in a breach. These are the same voices as in the workshop. So, this is their apartment. They say that Zil has broken down and is going to be repaired, and that the wiring is sparking in the garage. You have already seen Zil near the main building – it blocks us the way.

Take the keys from the basement in the workshop lying on the table. 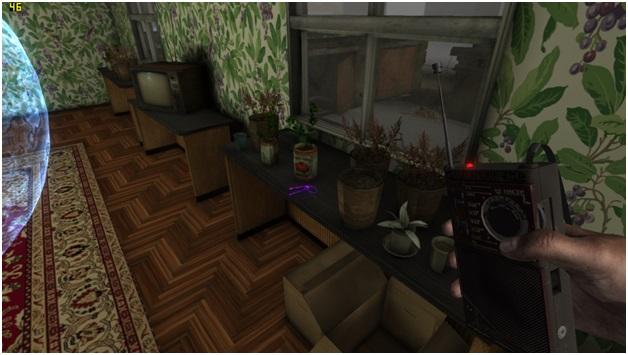 Leave the building and go to the garage with an unharmed truck, the same one that blocks the way to the main building. Listen to the dialogue inside. 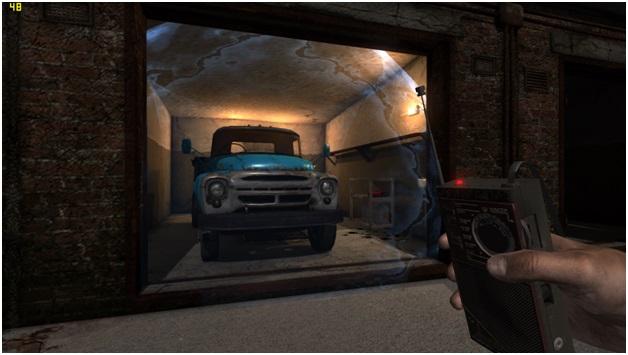 Next return to the workshop, open the door and go down to the basement.
Inside one of the breaches there are wires that have been mentioned in the dialogue. Take them. In another breach in the basement you can listen to the scientist’s monologue. 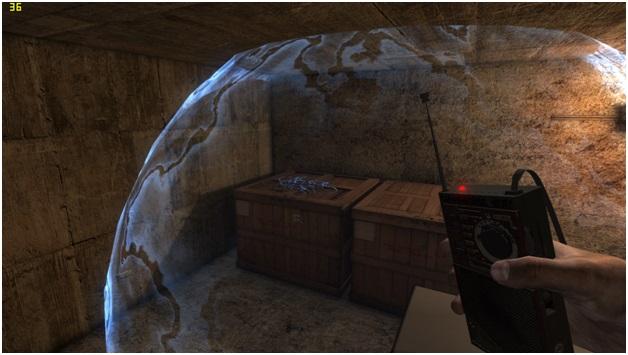 Return to the garage with Zil. You’ll see that now the wiring is sparking. Open the red canister with fuel and quickly run out of the garage. 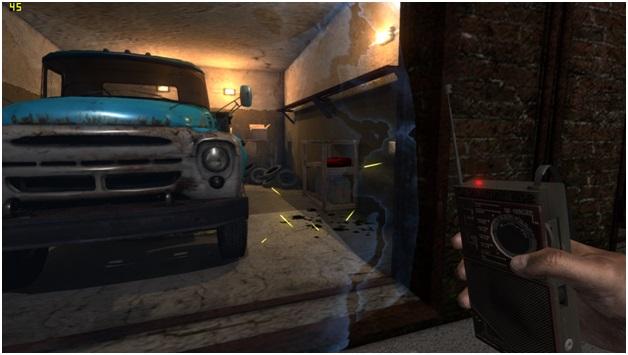 The truck explodes.
Return to the main building and see that the truck that had blocked the road has disappeared, and now you can go inside. The first chapter is passed.

After seeing the intro, you appear in the building. One of the scientists is coming out from the complex. He explains everything that has happened and asks to save him.

You leave the room and go along the corridors. All the doors with transparent glass can be opened, the others cannot.

This is not obligatory:
On one of the doors there is a combination lock. You need to somehow find out the code. Hint: Do not forget to search for signals using the receiver. 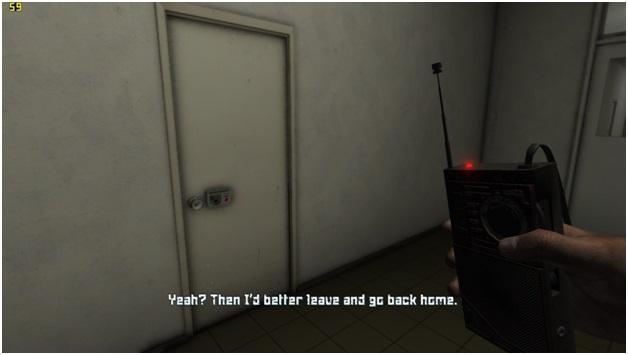 In one of the corridors there is a computer, but, as Nicholas told us, electricity is off, you must first restore it. 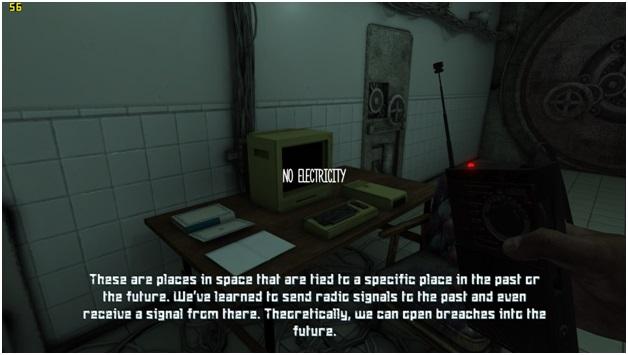 Track where the wires lead and you’ll find a room with switches. They need to be switched on in a strict sequence one after the other. If you turn them on in the wrong sequence, the devices will turn off. Every time you start the game, the sequence is determined randomly, so look for your own.
Turning on the electricity, go back and turn on the computer, open a large iron door and pass into the corridor. 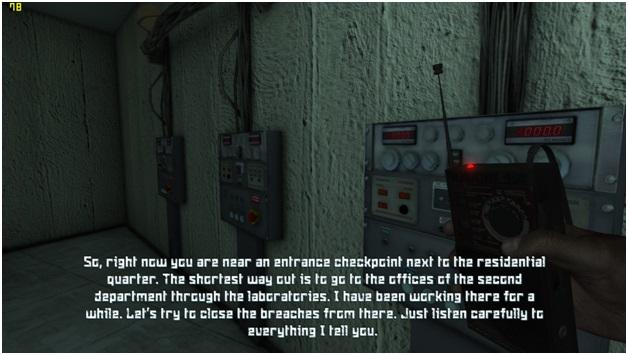 You can see the creature from far away. You will have to meet it closer a little later.
At the end of the corridor to the left you there is a room with a breach. Here you can listen to the dialogue. It explains the essence of the puzzle in the opposite room.

There are 4 radio devices. You need to configure them for one wave. You can determine which wave they are on only by sound. Radio devices can “hear” each other, so changing the wave on one device, you will hear it on the other. Switch the wave on all the receivers until you hear a sound coming from other devices.
When all the devices are synchronized, a breach opens. Pass into the next room.

Nikolai connects again and talks about the creature. Listen to it carefully; he explains the tactics of behaving with it.

The door to the next room is closed, but on the table opposite there is a key to it. Pass along the corridor to the end and open the door.
The level with the creature is loaded. Now you have to be very careful.
When a creature is close, you can hear it through the receiver and turning in different directions, you can understand which side it is coming from.

If you hear that it is nearby – look for dark rooms or use the switch to turn off the light, if it’s on (there are switches in all rooms except the corridors).

Stay in the dark and do not make any noise (turn off the receiver if you hear the creature even without it – it means that it’s very close), until it goes away.

You need to find a room with a breach to lure the creature into it. Go up the stairs to the second floor and go along the corridor with green walls.

Go into the room on the right, the second one from the end. 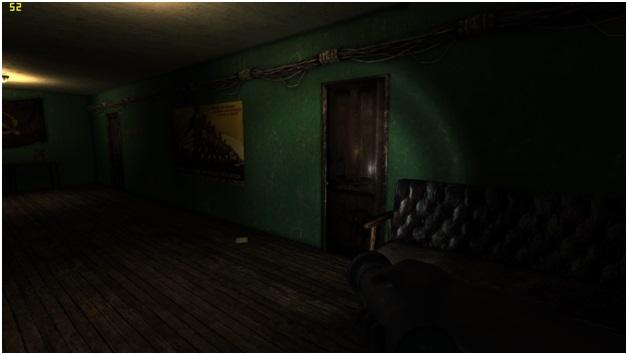 In it you have to immediately turn left and you’ll see a room with a breach inside. Go inside and listen to the dialogue.

You have to approach the computer and wait for the creature to come to this room. When it is inside the breach, use the computer. 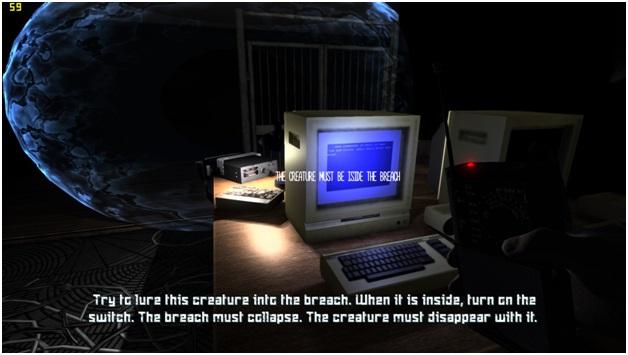 Next you’ll find yourself in some kind of hallucinations or maybe just inside the breach? Or somewhere between space and time?

The whisper of the creature is heard from all sides. If you try to go in a random direction, it will catch you.

You need to slowly turn around and find the direction where you can’t hear the whisper of the creature and the light on the receiver is red. Go in this direction until the green light illuminates. From this point, you need to choose a direction with no whispers and lights. You go to the next point and so on. There are five points in total.

This is not obligatory:
On one of the staircases you can find the door with the combination lock. You don’t know how to find a code. Go to the side opposite to the one you started with to find a room with an iron door. You’ll find a landing. Go into one of the doors on the first floor and you’ll see a computer at once. Try to enter the code. The code does not fit. Now you need to arrange an overload. To do this, you need to turn on the light in the rooms. In total it is necessary to turn on 15 switches. You can find them in almost every room except the corridors.

This not obligatory:
In one of the rooms there is a breach with the dialogue inside. Listen to an intriguing dialogue about experiments on people. When enough light is on, an overload occurs. Listen to a short dialogue and go to the room with an iron door. Now it’s open.

At this point the version of the game for early access ends. The passing is over.