Have you ever wondered why that “useless” orange suicde lockers are even in this game? Well, ask no more, as you have reached the most complete and complex guide on juking with these!

Before we start, let me tell you something about this technique. Out of all dodge/hiding tactics, closet juking is by far the most dangerous one, as, if doing this while full health and being caught, you are esentially giving away two hits for one, or even two for zero if you are able to pull 360s among others, and so, I really encourage you not to do it unless there is no other choice (or you are just feeling spicy juking on your veins that day…) Also, before introducing the techniques, I would like to say that the chances of propertly pulling these are lower than avarage, and appart from skill and timing, requier obnoxious amounts of luck. However, this luck can be boosted easily with certain perks or addons. Unless you really feel its going to work, I would not recomend you to try to pull one of these the second you get a chance to. 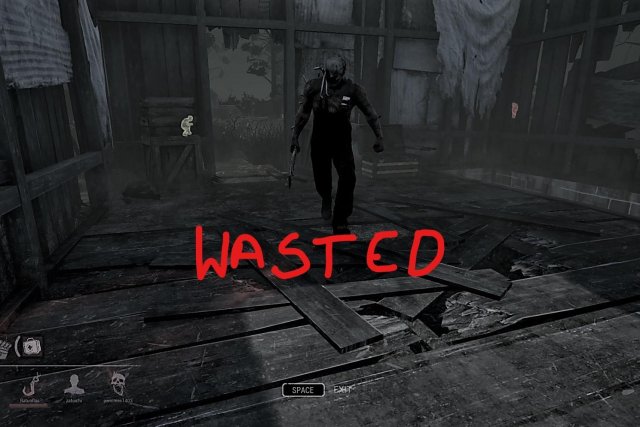 The best strategy for early game is to watch if the killer checks lockers. The two situations you want to look at, from a safe distance of course, are if the opens closets near a generator that was being fixed not long ago; and if he is one of the few that looks at closets when loosing track of a survivor. 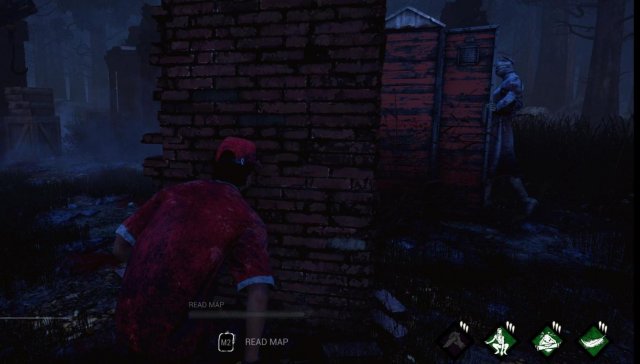 And now, lets get right into the jukes!

We will be looking at three types of uses we can give to closets. 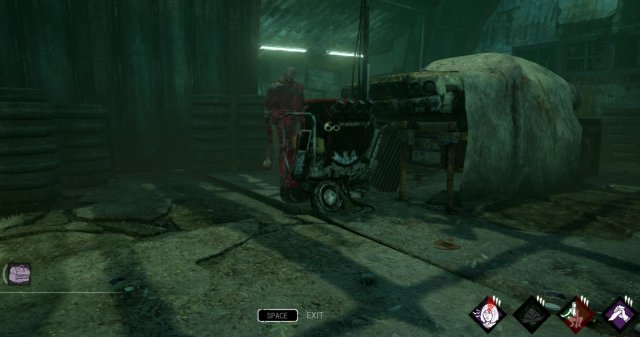 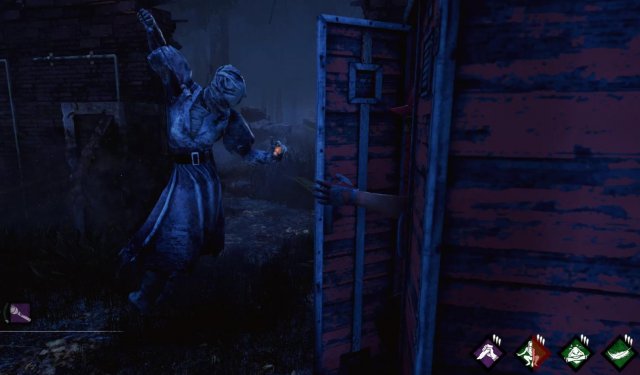 And a savage juking mechanic.

We will see the efectiveness of this for each killer, situation and map, appart from the perks you want to be running for this.

First of all, in order of complexity we will see the good old, noob strat number one. Using closets to simply hide. Closets, often considered the home for many Dwights are in fact meant to be used in this way. What I’m trying to say is that doing the most obviuos is sometimes the best idea. 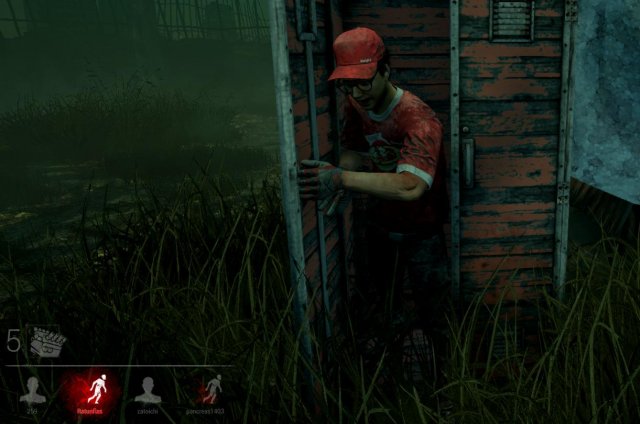 If you sudently start feeling the heartbeat, you actually may want to just hide in a random closet. There is no science behind that. It works or it doesn’t; however, when speaking about using closets after lets say, getting unhooked, or failing a skillcheck, we can say we have a more complex concept in hands.

The core of this technique is Jake’s iron will(rank 2 or above), as it is just very overpowered. It even gives you the possibility of performing this technique while injured reducing to almoast 0 the posibilities of getting caught. In addition to this, the other tool you want to work with is Meg’s Quick and Quiet, which although not that important for this strategy, is in fact a mesterpiece of its own, as even at its first level, it is more usefull than many rank three perks, essentially because the only scaling on it is cooldown. For the item, there isn’t a specifical need, as you are not meant to see the killer at any point, so you may want to go for toolbox for the rapair.

Other perks you may find intersting if you are wishing to pull this are the brand new Alert, by Feng Ming, revealing the killers aura when a generator is damaged closed to you; Laurie’s Decisive Strike, just in case you get caught in soloQ; and the real bussiness, the most badass perk in game, spine chill, as this is genuenly the best sceanrio you will need this perk in.

Killers with a stealth mechanic or just fast movent are tough to play against if trying to perform this. The hillbilly is kind of an exception, as you will usually have the terror radius to warn you, so this matchup is kind of even. The doctor may shock you inside the locker accidentaly, which is pretty messed up to be honest, as the radius on his ability is a weird looking cone. The rest of the killers, as long as they don’t check lockers (explained in “Observation Phase”), won’t be an issue. 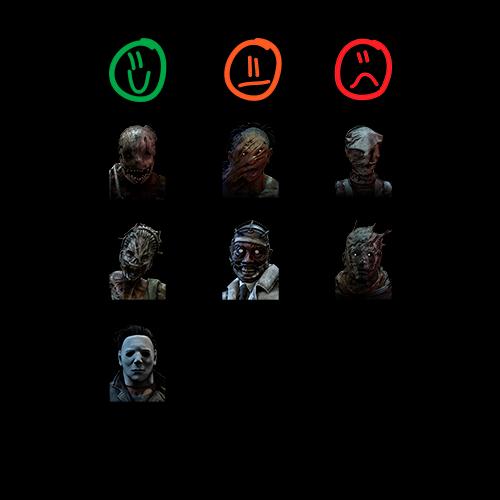 You want to avoid the following enemy perks at all costs.

Although they shouldn’t be that feared, you should also mind both Whispers and Insidious, for pretty obvious reasons.

Next, and probably the one you’ll be using the most, we have the a technique based on abusing high cooldowns. For this, you want to get into the closet just before getting hit by the killer. Its is not that simple though! We must first make a distinction between a standard left click hit, and an ability(hillbilly)/ability + click(nurse). Character’s power can be classified into direct combat vs more situational vs more defensive ones. 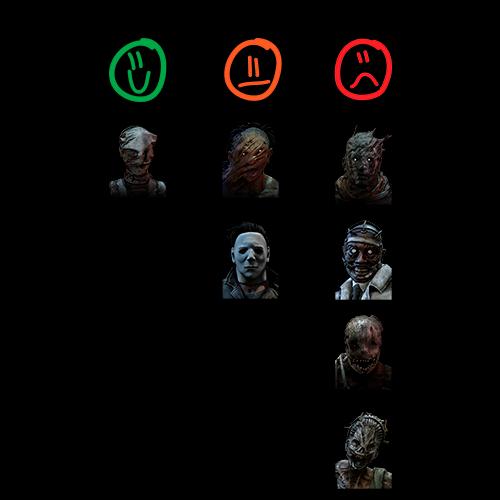 “Offensive” killers are Hillbilly and the Nurse, meaning their ability is essential for combat. They both provide mobility, they are both the most “skillbased”, and they both use directly their ability to harm survivors. “Situational” ones are Myers, which doesn’t hurt survivors with evil within itself. He essentially stalks to gain power ups and eventually reach the ultimate rank 3. This means his game is kind of more passive when out of power spikes, as farming (i mean stalking) is what you want to be doing most of the time. Same with the doctor, which doesn’t have the possibilty of directly damaging survivors while using Shock therapy, but instead, lowers their overall stats, for his future benefit. No one plays the wraith anyways, so i’ll just say he is on this group because i have no idea of where to place him, due to his mobility exlusive perk, which also nulls terror radius and visibility; kind of . The defensive characters are the hag and the trapper. Trap based means they will use them to isolate certain areas and disable specific locations, apart from finding survivors around the map. There is no relation between them and this juking.

When facing a nurse, what you want to be doing is to, if you know she is blinking towards you, jump right into the closet, even if making noise, abusing the fact that she can’t either hit you or check the closet, you want to get out quickly right after she hits, or her cooldown for the next blink starts. Not too risky, but really rewarding. A tactical must when facing this balanced killer:

2-Listen closely, and notice when she is about to cast her blink 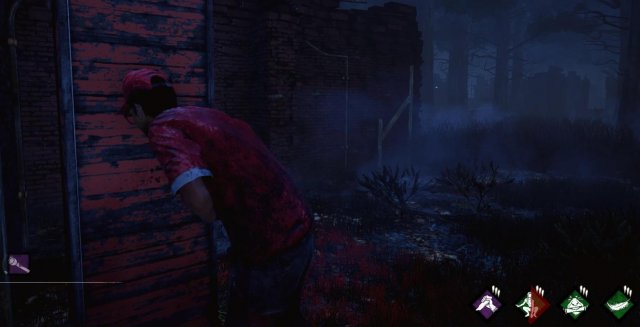 3-Look for the trails of the projection, probably just next to you

4-Jump straight into a closet 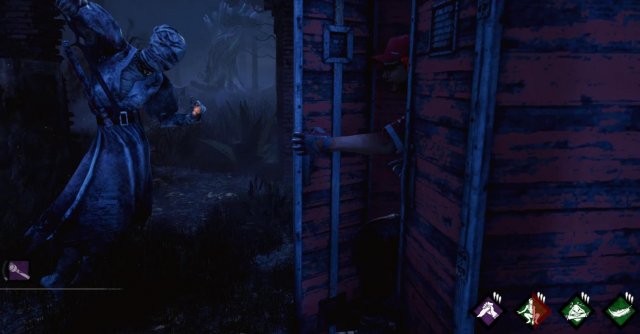 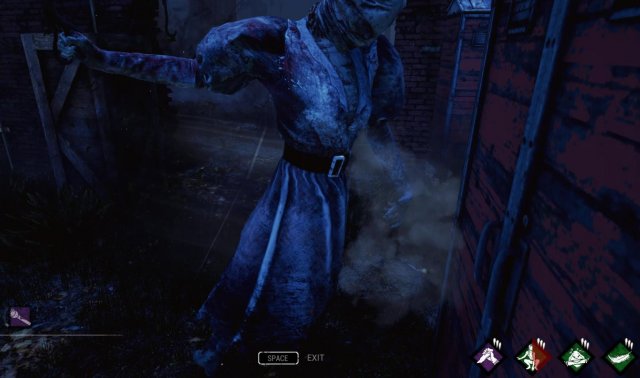 6-Get out of the closet inmediatly and make use of the extra time! 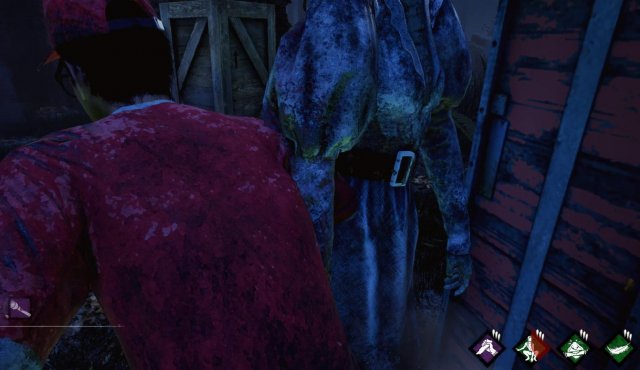 For a hillbilly, you can do the same, but I would only use this as a last resource. I mean, unless you are trapped in a closed area, you shouldn’t try your luck risking a one shot from him just because how cool it looks. Remember he can cancell his chainsaw , stop right before the closet for a lower cooldown, or simply face camp you for trying your best avoiding him.

1-Get cornered or in a bad spot 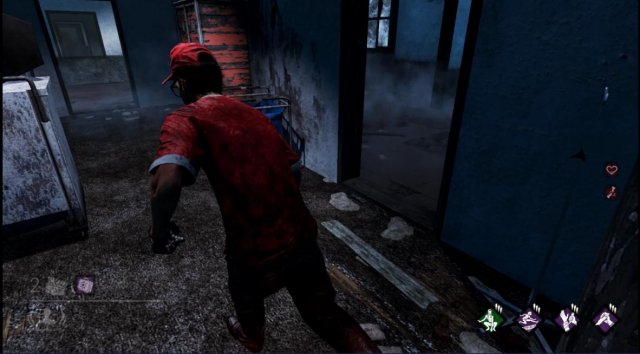 2-Wait for as long as you feel like can 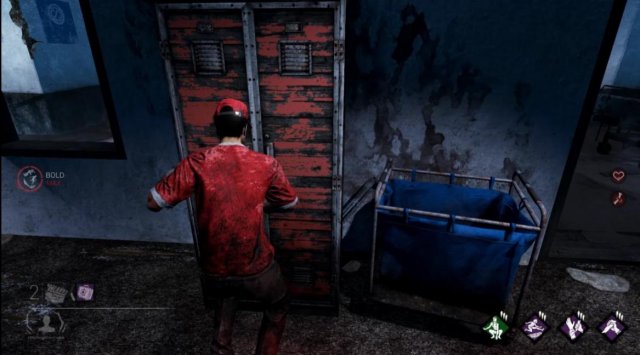 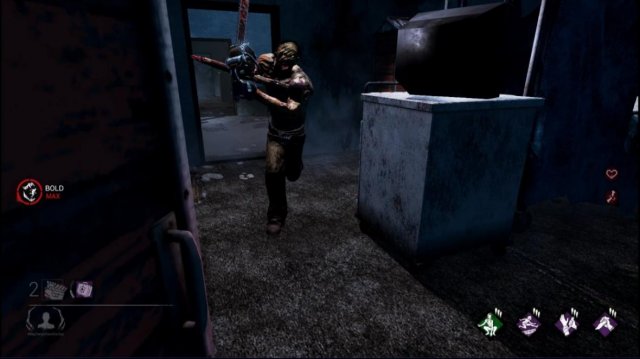 4-If lucky, the killer must have hit the wall behind you, leaving him stunned (in both possible ways). 5-Take advantage of the bonus seconds! Myers with evil within rank 3 is the last case before we get to the next tactic. This , alongside other one shot potentials, are a good moment to closet juke in this way. You don’t loose anything for trying, as the one shot will take place anyways if caught or hit. Also, make sure you combine the closet with an other technique, like strafes or 360s. It will work as long as you are not too obvious, meaning you should not run directly towards a closet. If performed correctly once, make sure it is not done directly afterwards, as the killer will for sure recognise your movement patern. Look always behind you, so you don’t hide before the lunge, nor too late.

1-Look behind you continiously

2-As you see him starting the lunge, hide

The perks that are most suitable for this are lightweight, providing a higher escape chance due to the lower duration of marks. Once again, Iron will, for the escape potential. Sprint burst, lithe or balanced landing counld work for prolongated chases. Lauries decisive strike is a tactically superior to any other perk for this action, as there is not too big deal with this. Self care is among the top tier too. And for the item, you should take a flashlight, prioritazing its lifespan over its power, as long as you are conftable with this of course. On base, this works good with the nurse and hillbilly. And goes even with the rest.

ANY cooldown reducting addons or perks will mess the timing, both for regular hits and abilities. Watch out specially for the following:

And finally the jewell of closet juking. Essentially, you want to try to vanish from the killer, by seting up a “trap” to be able to get into a closet and make him think you are nowhere to be seen, and so, make him leave. The ideal situation is the following: First, you get into an area with pallets and a closet. Something like this is the perfect place to pull the trick. 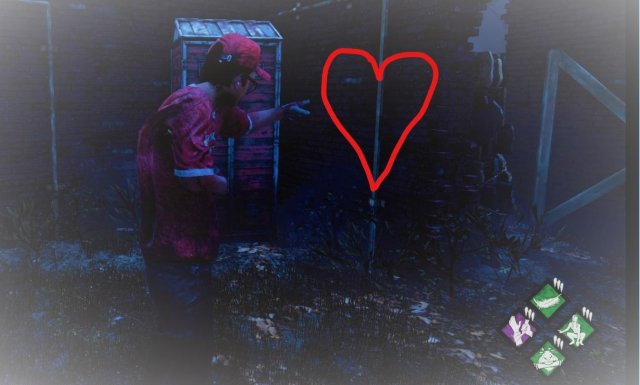 Although as you get better with this, you will be able to propertly understand when this can be viable, and find your very own spots.

This base locations can be found in The Macmillan State, Coldwind farm, Autoheaven Wreckers, The Red Forest and Crotus Prenn Asylum. Haddonfield’s garages can make up for this, the weird docks on the swamp can serve this function i believe, and the claustrofobic corridors and rooms of the memorial institute, which are more than enough, as that map is great for hide n’sick, but terrible for juking the traditional way.

1-Reach a non return point, somewhere where you are cornered or a place where you have no other choice than getting hit. 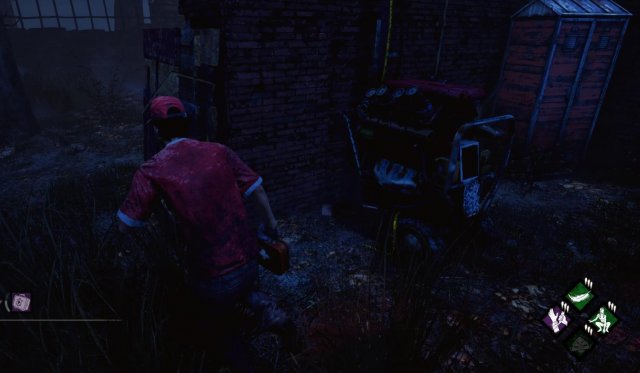 2-Get some distraction. A pallet stun is ideal, although a simple pallet drop or just turning a corner can act the same way, taking you out of the killers field of vision. 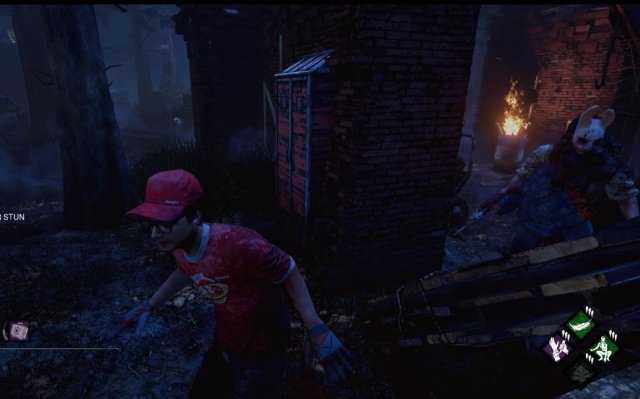 3-If time is on your side, run slightly past a closet, leaving footprints, so the killer may think you kept running, although in many cases this won’t be needed. 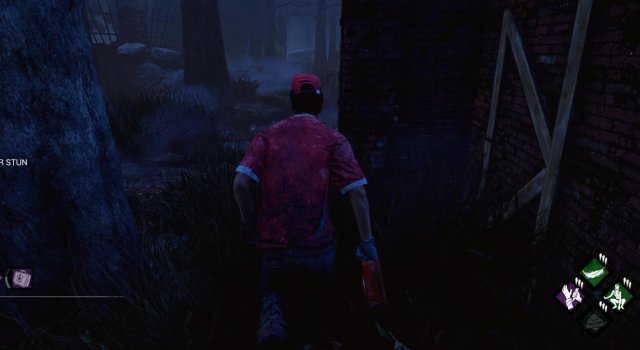 4-Get into your last resource. 5-Let the killer go away. If your opponent is persistant and won’t refuse to leave the area, just wait for the best moment to exit and keep running! Having said all of this, lets get into the killers. You can do this to any killer, as it is the most killer-versatile strategy of the three. It is always kind of the same, as you are simply disappearing from their sight. Myers and the Hag should not get you in trouble, as their speed is generally lower. The only killers that can bust you in an easier way are the trapper, due to his fast breaking pallet perk, the hillbilly, because of the chainsaw-pallet mechanic, and obviously, the dreadful nurse.

For the survivor perks, lightweight and Quick and Quiet are the core of this. Iron will is once again really effective. The last perk is in this case open, as, overall, Q&Q and iron will are the most usefull ones when speaking about closets, and all the rest are based on your situation or current condition.