If you want to be a gang that anyone respects, you’re gonna need a good crew. In Empire of Sin, there are up to sixty gangsters available to hire with their own personalities, backstories, and relationships. A list of available gangsters is available on the Black Book screen. Each gangster fulfils one of five Professions: Enforcer, Hired Gun, Demolitionist, Doctor, and Con Artist. Each role has its own abilities, strengths, and weaknesses. A breakdown of the different Professions appears later in this section.

How to Hire a Gangster

The Gangster Sheet, also called the Rap Sheet, gives you an overview of your crew-members traits, relationships, stats, and equipment. This is where you can equip your gangsters with different weapons and equipment. Gangsters have two important stats that it’s important to keep an eye on as a boss: Morale and Loyalty. Morale can increase or decrease in response to events. It may increase after taking a racket, or decrease after a gangster is shot. Loyalty naturally improves over time and in response to promotions and, in some cases, as a result of events. Loyal gangsters will take a smaller cut, and extremely loyal gangsters will even work with gangsters they hate.

Certain gangsters have missions that fire when you reach a certain loyalty with them. A gangster may approach the boss about an issue from their past, or a current issue that they need help dealing with. The player can then decide whether they want to help the gangster (which could result in loyalty or morale gain, among other rewards), or decide not to help the gangster, which could have potentially negative repercussions. 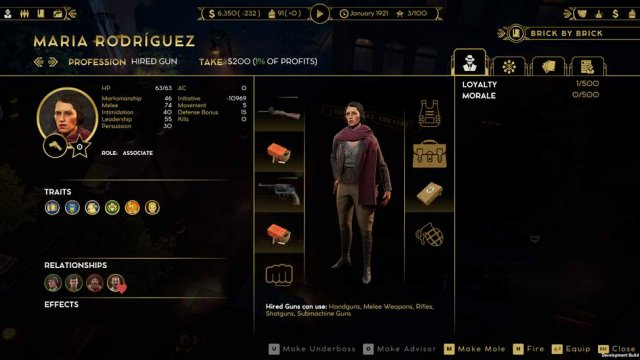 The biography screen lets you get to know your gangsters a little better, if you choose. Here you’ll find their biography, their background (which informs the traits they begin the game with) and their life lesson, their personal credo which grants them a powerful trait. 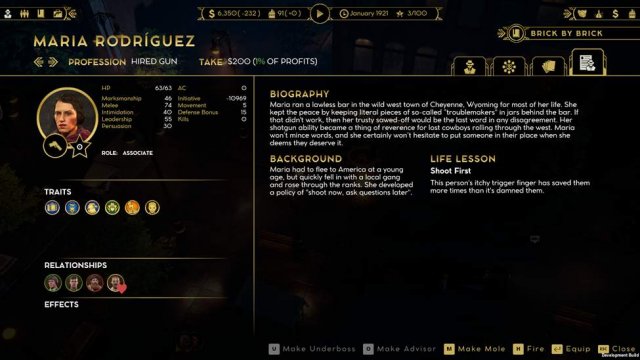 Your gangsters come with their own traits, just like the boss, and can gain new traits from gameplay in much the same way. Carefully considering a gangster’s traits is useful when putting together a well-balanced crew. A list of traits can be found in the Appendix.

The Talent Tree allows you to choose new abilities for your gangster – each profession has a different tree of options. Learning a talent takes time, and one talent must be chosen from each tier before you can move onto the next. A list of talents and their uses can be found in the Appendix. 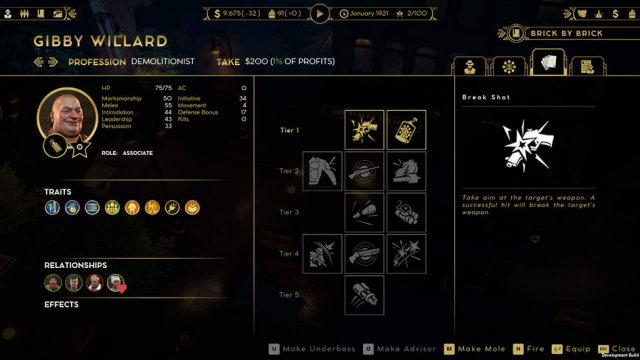 Of course, no one in Chicago works for free. If you wanna bring some top-quality talent into your crew, you’re going to have to pay them. They’ll take a large payment up-front, and after that they’ll take a percentage of your earnings each week: their take. The better the gangster, the higher their take, and the higher your Notoriety will have to be for them to even consider working with you. Unless you build up your relationships with low tier gangsters who are friends with high tier gangsters… skip on down to the tips for more information on that. 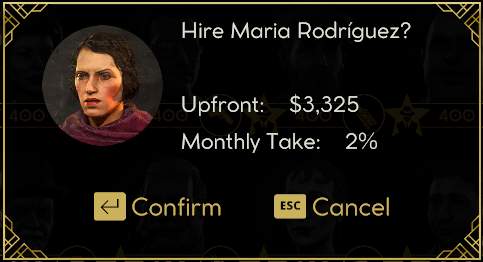 Forming a crew is easy, so long as you’ve got the dough. Go to the Black Book screen to view the gangsters available at your Notoriety level. You can click their portraits to view their various stat, traits, and equipment screens. When you have chosen a gangster, right click on their portrait in the Black Book screen to hire them – so long as you can afford them. They will appear at your boss’s location, prepared to follow your every command. Simply click on them (or click and drag to select multiple gangsters) and start setting them loose on Chicago.

Enforcer: Enforcers can really give a beating, and take one to boot. Just give them a bat, crowbar, or brass knuckles and they’ll be happy.

Con Artist: Con artists can talk the hind legs off a donkey. In combat, they can move farther and faster.

Doctor: Doctors have seen it all, and they can patch up damn near anything. They can heal during combat, and if someone does get sent off to the hospital, they’ll make sure they don’t have to spend too long there. Outside combat they boost your characters’ passive healing and keep your risk of getting STDs way down.

Hired Gun: Hired Guns are marksmen by trade. Handles a gun like they were born with it. What they lack in brawn, they more than make up for in accuracy and critical hits.

Demolitionist: Demolitionists know their dynamite more than their right hand. They’re less liable to lose any fingers, too. Call on them to raze buildings down, or chuck some grenades in the heat of combat. They’re not too shabby with a gun, either. 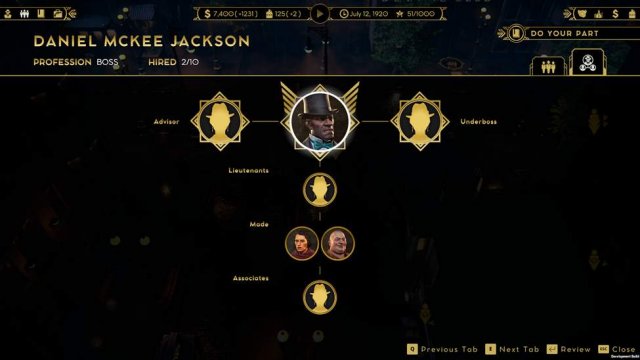 You need a notoriety level of 500 to assign an Underboss, but once you do, they can be sent to manage business in your primary safehouse. Underbosses will reduce the wages paid to gang members based on their leadership. Below that, loyal soldiers can become Lieutenants, which can be assigned to other safehouses in different neighborhoods. To be promoted, a gangster has to be Made – this will happen automatically when they kill someone while under your command. You can keep track of your gang’s hierarchy on the tab next to the hiring screen in the Black Book, as seen above.

When you’ve got the notoriety requirement, you can assign your gangster to Advisor or Underboss in the Gangster sheet. Select “Change Role” at the bottom of the screen, and choose from the roles available. You can only have one Advisor and one Underboss, so choose them carefully. Lieutenants can be assigned by interacting with the desk in another neighborhood’s safehouse, or simply by purchasing a safehouse in another neighborhood. 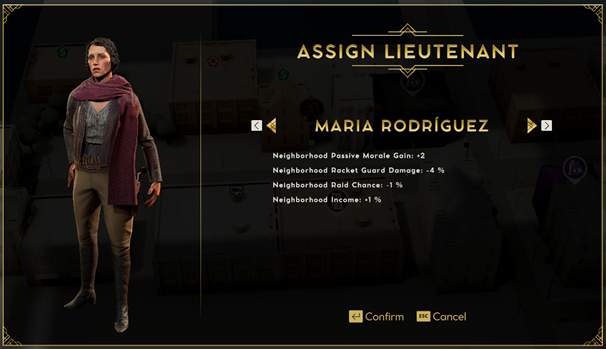 Relationships can also develop over time. Gangsters that spend a lot of time with one another can develop feelings for one another, and those feelings may eventually become romantic. When gangsters are in love with one another, they protect each other in combat. A gangster whose lover is shot in combat may get a bonus shot in at their lover’s attacker. Ain’t that sweet?

But it ain’t all sunshine and roses. Some lovers can develop jealous tendencies, and if they find out that another gangster is in love with their object of affection, they might turn violent. Keep a close eye on your crew to prevent any unnecessary bloodshed. Remember that you can always implore crew members to pursue other romantic interests. They might pout for a while, but it’s better than winding up with a dead gangster on your hands. 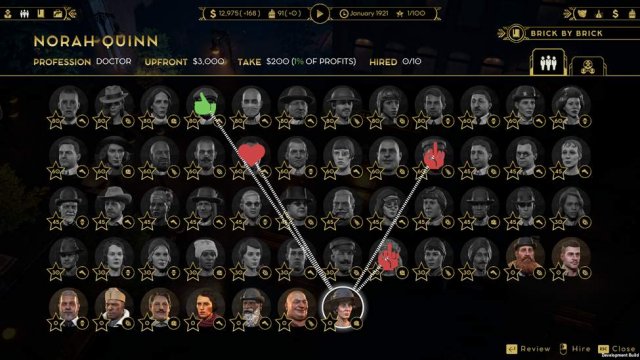 You can’t make people like each other, and that’s okay. What you can do is capitalize on gangsters who’ve already got relationships brewing. Here’s a few tips to make the most of your criminal connections:

Empire of Sin – Guide to Weapon Types and Proficiency Bonuses

A short guide of all the weapon types and their proficiency bonuses in Empire of Sin. ContentsTypes of Weapon and Bonuses OverviewIntroductionGeneralMarksmanshipPistolsSub Machine GunsMachine GunsShotgunsMelee WeaponsRiflesSniper Rifles Types of Weapon […]