The hunted challenge is hard as balls, luckily for you I have realized a few things that might help you in your attempts to get gud.

Don’t get caught in the open

This always means instant death, even if you think you can make it, the damage from the first few shots will slow you down enough that you become easy prey. Always have cover close by, and don’t travel large distances in one swoop unless the helicopter is far away.

Distract the Helicopter with explosions

Yes, the Helicopter can get distracted. I recommend the rocket launcher for this, as it seems to work better than pipe bombs, and normal bombs are hard to place in a location without accidentally actually making quicker for the Helicopter to spot you.

Learn what the Helicopter can and can’t hear

The Helicopter can get notice many things if it is close enough (Which it basically always is, thanks to it always roughly knowing where you are). It can hear gunshots and explosions, but it can’t hear cars starting (although it will still usually still quickly spot you) and the rest of your tools.

Accept that stealth is not possible for >10 seconds

The helicopter always knows your rough current location, and will constantly be flying relatively close to it. You may dream of leading it to one end of the map and then sneaking away to the other side for a few minutes of relative peace and chest collection, but it will never work. The most you can do is using short term distracting using 2., which can let you sneak for about 5-10 seconds before being spotted again.

When you move quick enough, you can get some distance between you and the helicopter.

This is not saying that you should just run straight towards your goal, but don’t wait at every single piece of cover and then move to the next. Constant jumping seems to be a good way to increase your speed, but I’m not sure.

The sound cue is more important than the spotlight

If you’re playing the game muted you are at a strong disadvantage, as the sound of the Helicopter spotting you actually plays a little bit before the searchlight moves on to you. generally listen a bit closely, as after a while you might be able to tell from the loudness of the rotor blades if you can risk running through an open area or if it’s already too late.

Why Frustrum? Because it’s the map I have the most experience with.

Avoid crossing the river, as unless you are very lucky with distracting the helicopter, its very open and you move slowly though it. Boats are faster but you still often get mowed down in them.

Take the road instead. If you hug the very side wall the Helicopter (99% of the time, unless its at a very specific angle at a distance and down, which it will always leave as it prioritizes being closer to you over actually being able to hit you), it will not be able to hit you. It might shoot 1-2 rockets at the roof, but then it will stop and you can run across to the other side in complete piece. at the other side you will also have a solid 10-15 seconds of time to grab the chest you need and get yourself into the right position to escape again before the helicopter comes into shooting distance. 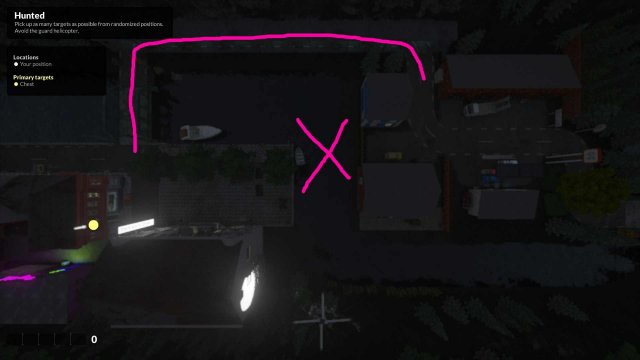 Within this guide for Teardown, I will demonstrate on how to enter the vault on the map “Hollowrock”. This is a vault located underneath a building by the far-left bottom-side […]

Teardown – How to Create Hoverboard in Mansion (How to Fly)

Hidden Expensive Items 600$ Banana [Compaign map] crawl into the furnace, shoot it if you can’t fit, go into the cave, eat banana. 450$ Antique SwordThere is no door to […]