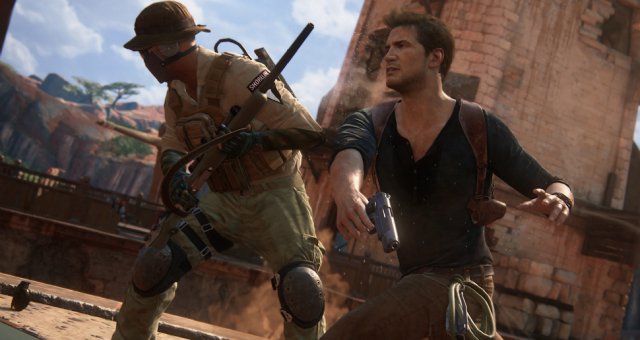 Collect All the Trophies.

Complete the game in explorer mode.

Complete the game in light mode.

Complete the game in moderate mode.

Complete the game in hard mode.

Complete the game in crushing mode.

Complete the game in 6 hours or less.

Head of the Class!

You Have a Head for this Busienss

Perform 20 headshots from the rope.

I Thought I Heard Something

Defeat 10 enemies in a row, alternating gunplay and hand-to-hand.

Defeat 100 enemies in a row without dying in combat.

Defeat enemies with a pistol, machine gun, and grenade, in that order in 15 seconds.

Ghost in the Cemetery

Get through Scotland cemetery combat encounter without killing or being seen.

Defeat 4 enemies with the same explosion (all explosive items and weapons are allowed).

Defeat 10 enemies in 60 seconds with the China Lake Grenade Launcher.

Destroy 10 vehicles while being dragged from the rope.

Defeat enemies with a stealth attack, melee attack, headshot, and explosives, in that order, in 15 seconds.

Defeat 5 armored enemies with melee only.

Pull 20 enemies over when hanging from a ledge.

Get in the Game

Complete all trials on Moderate (difficulty) in Multiplayer.

After being marooned, leave everyone alive until the Treasury.

Play with the lemur in the market and let it steal your apple.

I Accidentally All the Guns

Use every weapon in the game.

Not a Cairn in the World

Knock over all rock cairns in Madagascar.

I Can See My House From Here!

Climb to the very top of the Clocktower in the City.

Solve the first Trial in Scotland in 10 moves or less.

Beat the best score in the retro videogame.

Listen to all optional conversations in game.

Play in the ocean near the sunken ship.

Drive away in the jeep with Elena without killing any enemies.

Hit all targets in the attic with the toy gun.

Take a photo of Sully.

Perfectly parry Rafe in the sword fight without getting slashed or stabbed.

Join thousands of fortune seekers around the world as you battle for dominance in Uncharted 4’s online multiplayer. With multiple modes, unlockable characters, upgradeable gear, and thousands of customization combinations, […]

Uncharted 4: A Thief’s End – The Location of the Journal Notes

In this game the main character Nathan Drake explores the ancient Tombs, looks for the lost pirates’ colony and their treasures. There are a lot of treasures that are thrown […]

A walkthrough showing the solution to the chapter 11 Founders Puzzle. There will be three puzzles you need to solve as you unlock one another will open. So all you […]