Some new players, myself included, have problems winning scoring goals or winning games at all. This guide will give some tips to new players on better ways to play.

If you’re a hockey fan, throw out everything you know about goalies and how they work when playing this game. It’s better to think of the goalie as a small, animated pong paddle than an actual goalie. Any shot that hits the goalie’s hitbox will be blocked. So, no matter how many times you shoot at the goalie, he will make every save.

Some other things to keep in mind with the goalie is he’s the only character that can’t be hit (unless you count the Zamboni). He can, and will, check everyone else, though. Even his own teammates. Best to stay clear of both goalies no matter what side you’re on. The goalie will also never cover the puck… or play the puck at all.

When first starting, it may seem impossible to make goals. But, by using the other team’s defense (or lack of) against themselves, you can start making more goals.

Once you gain control of the puck in either your ice or neutral ice, the both teams will make a rush to the opposing team’s goal (except for one player who will chase you). 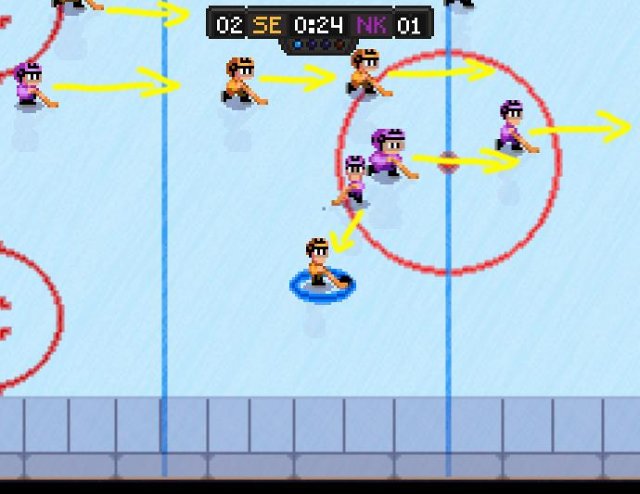 This is both handy and irritating, depending on what side you’re on. The best thing to do is play keep-away until you reach opposing ice, either by carrying the puck along the boards or passing to open players. Generally, from what I’ve seen, the puckholder is ignored until you reach enemy ice except by the chasing player.

Once you reach enemy ice, it gets a little more tricky. Like stated above, this isn’t a normal goalie you’re facing. You’ve got to get around him to make a goal while avoiding being checked by the enemy team.

Fortunately for you, there isn’t much of a concept of defense (formations, tactics, etc.). Which can often leave the goalie by himself, like this: 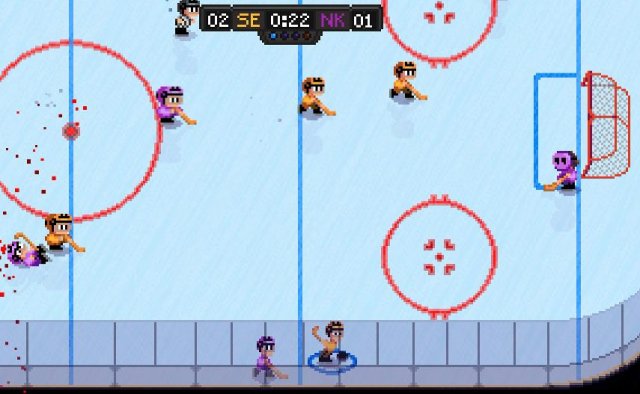 In real hockey, this is the worst possible scenario for a goalie. But, because this isn’t a normal goalie, we’ve still got to get around his hitbox to make a goal.

There are about three ways to do this:

Basically, shooting the puck around the goalie: 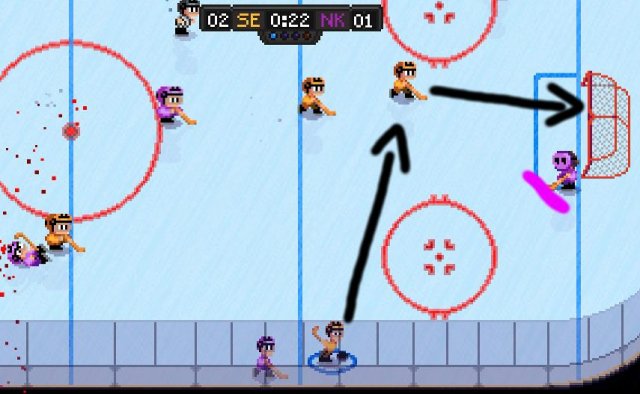 To do this, you have to wait until your teammate is in an open position. Once the goalie is out of position, quickly pass the puck to the open teammate and immediately fire into the unblocked portion of the goal.

You can note that, as soon as you shoot the puck (either to pass or shoot) the goalie immediatly drops to make a save: 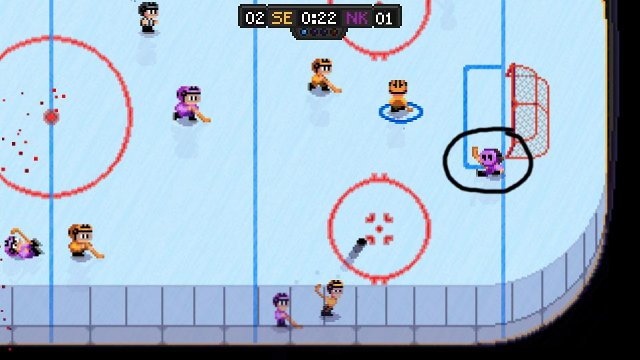 This further opens the goal for one-timers as the goalie is down and out of position to block your other teammate.

Sort of what it sounds like: you take a shot at goal, which bounces off the goalie, only to follow it up with another immediate shot, either by the same or different player. This is more tricky to pull off. This is a good idea when you can’t set up a one timer because your passing lane is blocked. This shot requires pretty quick reflexes as you have to make sure that you regain posession of the puck immediately after the first shot. The goalie will slide towards the other goalpost after blocking the shot. Your best bet is to then immediately shoot the puck at or near the opposite goal post.

Probably the hardest to pull off. This is a one-man shot that gets around the goalie. Because the goalie’s hitbox and speed are limited, it is possible to shoot a puck near the goalposts and have it go in (or deflect off the goalposts into the goal). In my experience, this is really only successful when using the the ‘sniper’ class. But, using this class leaves you more vulnerable to being checked and losing puck posession.

Puck posession is what’s important in real hockey and this game. The enemy team will get puck posession, either by checking your puck-holder, winning faceoffs, or intercepting your passes. As stated above, there isn’t much of a concept of defense. That also applies to you. Just like the enemy team, once the opposing team gains puck-posession, your entire team will rush to your goal.

Ideally, in real hockey and this game, keeping the puck in the enemy’s territory is a top priority. If you lose posession in enemy ice, a good idea is to try and attack the puck-holder. Switching to a player close to the enemy puck-holder and checking him will often gain you puck possession.

A note on checking: Be careful when checking larger players. Right now, the game seems to be set up so that around 6-7 checks in a row to a single player in a short timeframe will trigger a brawl. This may or may not be good. If you’re down points, it may be worth the risk to gain the man-advantage.