The main draw of Cosmic Break is it’s extensive customization system, allowing you to change out arms, legs, heads, and boosters to create your own character. You then take these characters into various gamemodes, like PvP focused Arena and PvE focused Mission Mode, with each of these modes having their own rewards that you can cash in later. Characters are one of four classes, and the PvP modes are split up into two teams competing to murder the crap out of the other team.

Units in this game are split up into four classes, and their behavior and available equipment determines how they function ingame. Land, Air, Artillery, and Support. Lands run faster and have reduced flight time, airs have longer flight time, arts have better vertical aim angles and supports have no real bonuses. Lands are weak to beam, airs are weak to blast, arts are weak to melee, supports aren’t weak to anything. Other than this equipment also has class restrictions.

Lands generally have shell based guns, which do no bonus damage to any class, and a lot of shields and melee weapons.

Airs have the most beam weapons in the game and they have a pretty significant amount of long ranged weapons. Their gimmick is extended boost times, allowing them to fly much longer than every other class in the game.

Arts have the widest access to guns in the gun, and they have the most explosive weapons available, which do bonus damage to airs.

Supports have a tolerable, but not pleasant selection of weapons to choose from. They get a very little amount of everything. They make up for this with exclusive access to support equipment that can heal allies or buff/debuff players. Other than this, their direct combat ability is generally low. 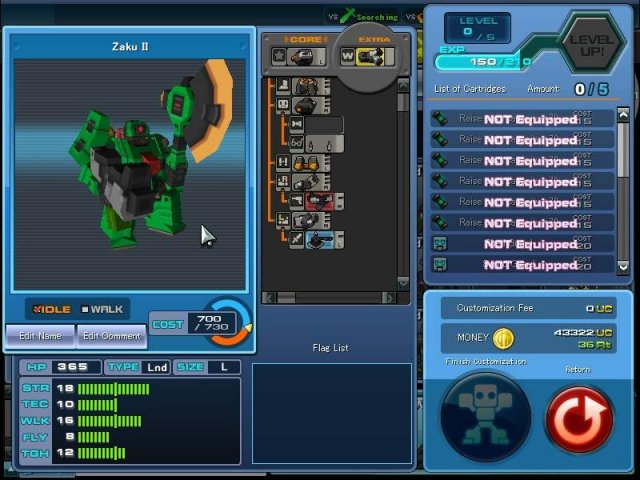 Starting from the top, cost is how many points your unit removes from your team’s health bar when it dies. Capacity is the maximum cost your unit is allowed to have. Every part, weapon, and cartridge will add cost onto your unit. Capacity carts give you more capacity and health. HP is your health. When it hits zero, you die. Items and healers can give you health back.

STR/TEC are your melee and gun stats. They just offer flat bonuses to your STR damage and TEC damage based weapons, with no additional bonuses. It’s just +damage. The game uses a formula so you aren’t gaining 1 damage for every point you have in these stats, you only get results at certain breakpoints depending on what the weapon’s force (damage) is. Higher force weapons get better bonuses from damage stats. To be clear, these do not “improve your ability to aim” or anything. Performance stats like that come from the weapon itself. It’s just damage.

WLK/FLY are your mobility stats. One is for ground movement and the other is for flying. Some cartridges like Boost Run use a mix of these, and some of them like Sway use exclusively WLK.

This game has a system where the more damage you take over a short period of time, the more it gets reduced. This resets after several seconds, and TGH dictates how quickly this system kicks in. TGH also increases your resistance to being stunned by damage (only damage, certain weapons will stun you regardless and melee-type damage will always stun you unless you have super armor)

That yellow thing in the corner is your wonder bit, which is like those floating gun things you get in Gradius. Activating and deactivating them makes you invincible during the animation, and while they’re active they’ll attack nearby enemies automatically.

Weapons have stats on them that are confusing.

Force is the raw damage, TEC and STR are working to increase this number. A weapon’s base damage is it’s force.

Ammo is ammo. You’d think this is straightforward, but there are some weapons that use multiple counts of ammo every time the weapon fires. These are usually obvious though and you’ll notice it when you shoot them.

Range means several things, for guns it means the lock on range, and it’s also generally representative of how far the bullet will travel.

For melee, range generally refers to the range that the weapon will track, but some weapons are weird and range refers to how far out the submelee goes. You’ll have to experiment on these ones.

Speed on guns refers to how many range units the projectile travels in one second. If a gun’s range and speed are the same then the bullet will travel to that range in one second. It used to be that having a speed 1.5x higher than your range made landing hits easy.

On melee weapons, speed can refer to several things, but it generally refers to how fast your unit travels during the time it moves.

INT gets complicated. It refers to way too many things and it flips between which one on a weapon basis. On guns, it generally means the firerate, but on certain guns it seems to refer to the cooldown time. On melee weapons, it’s generally representative of the cooldown time.

Aiming a main weapon at someone will lock on to them and enable aim assist, but aim assist isn’t 100% and you have to lead your shots or else you won’t hit anything.

Sub melees involve pressing the right mouse button and the attack animation will play out. Some sub melees are special snowflakes and will have directional inputs, pressing the left mouse button to do different attacks, etc. Generally the game tells you about this.

Every sub melee has a set combo, or amount of attacks the weapon does on it’s own. If the weapon allows for it, you can combo from one melee weapon into another, which gives a damage bonus when you do this. Some weapons don’t allow for comboing into them, some don’t allow for comboing from them, and some don’t allow comboing at all. After a combo of a certain length, enemies will obtain a flashing melee invincibility. As usual, you’ll have to test these things. 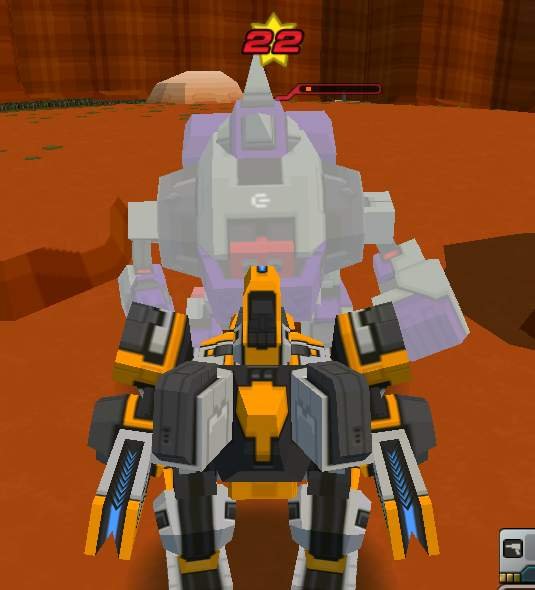 Lockon subs usually refer to things like missiles and debuff shots, but can sometimes refer to certain melee weapons. You activate these by looking at an enemy while in the range of the weapon and waiting for the faint lockon circle to appear. The game will let you know when the subweapon is locked on, and at that point you can activate it. It’s hard to give a description of these because there’s so many lockon sub ranged attacks in the game. 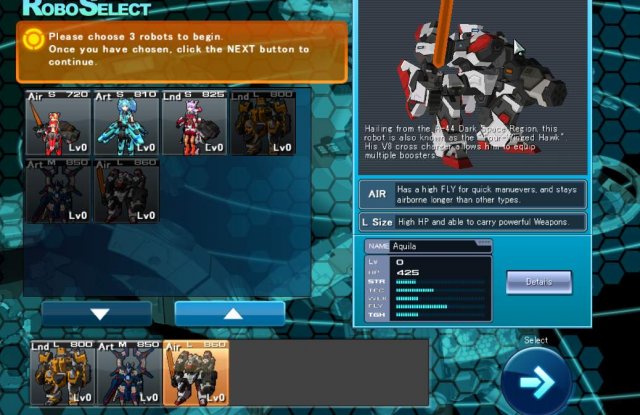 The girls are cute and all, but you can buy them with UC at any point in time. You’ll need parts from mechs to make strong builds later on and every mech here costs paid currency to obtain. Amateus is a direct counter to Baltheon, who is a strong meta viable unit right now and Aquila has decent core weapons and is good for clearing out one of the quests in the game.

Hound Dog exists. He’s not that good so you can replace him with one of the girls if you absolutely want to. His weapons aren’t that good and Mighty Byne is available in the shop as a far superior land unit in today’s balance. Amateus is a decent alpha core and his parts can be repurposed for custom Art builds on units you’ll recieve later. His built in weapons are pretty good too. Aquila has a built in boost regain in his core and his weapon is decent, but not great. 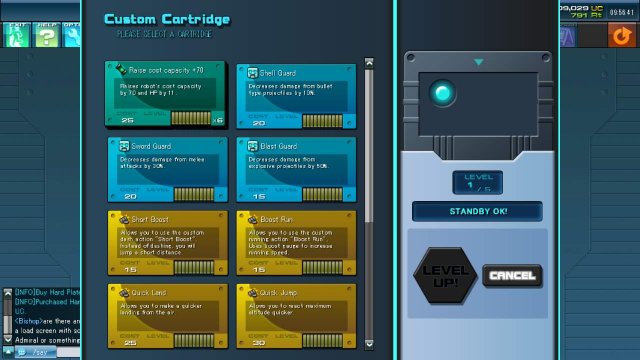 As you participate in activities on the Ark, your units will gain experience and eventually become eligible for leveling up. When you level up, you select one (1) cartridge that grants a benefit to your unit. One of the first thing you’ll need is capacity cartridges, as these increase your capacity and allow you to hold better weapons and tune your unit with higher stats. It’s also generally a good idea to have at least one guard cart. Sword Guard, Blast Guard, and Beam Guard are all really good, but shell guard’s bonus is too low to be worth taking. You can’t take a guard for a damage type your unit is weak to. 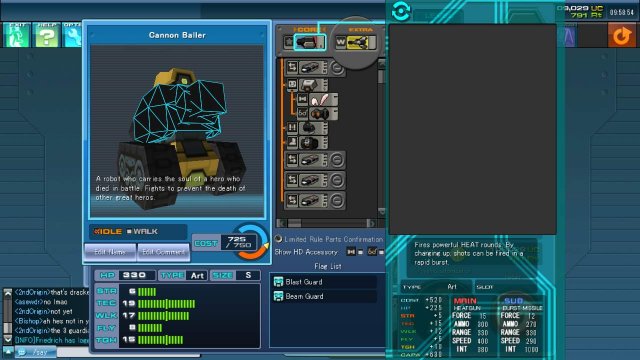 Certain units with an internal weapon will have cartridges that usually increase the damage of the built in weapon. In order to see the benefit of these cartridges you’ll have to click on the weapon itself to see the updated stats. In Buff Devastator’s case, it makes his heal bubble heal for 100. 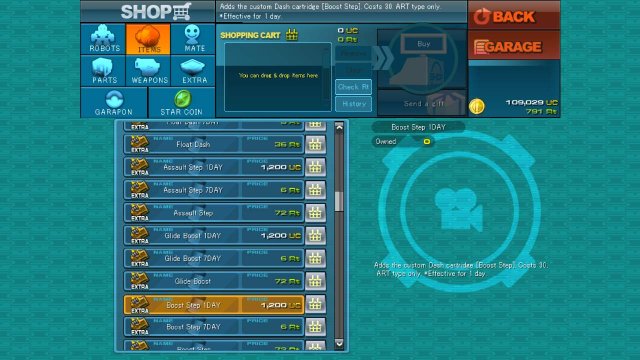 While most cartridges are passive and grant background buffs, like invisibility on radar, some cartridges are active and will cause your unit to do something different. Most of these active carts are dash carts like Short Boost or Assault Step. A lot of the active carts are custom install only, meaning you have to go to the shop to buy and install them. You can even find some of the standard dash carts here, which is good if you want to custom install it and swap in an extra capacity cart or guard into a build. 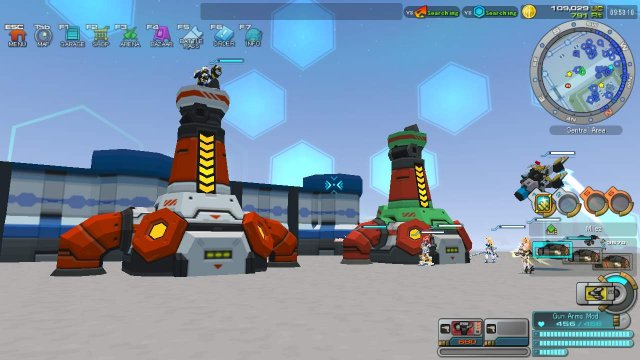 In order for you to not get harvested like a crop in the arena your unit is going to need tunes, and more specifically you’re going to need mobility as soon as possible. Throughout the game there are activities like Arena or Mission that will give out tuning materials that you can use to increase the stats on your unit. Once you have a supply of materials from doing Legion missions and your rank up rewards, you can find the Cosmos Pot which is located in several areas in the game.

Tunes are split up into several categories. +1 tunes have a 100% success rate, but because of slot limitations, no viable build is using exclusively these. High tunes give +2 to a stat and have a chance to fail, although High Alphas are going to be the main tune you use in this category due to cost reasons. A straight High is 15 cost while a High Alpha is 10 and gets rid of a stat point you weren’t using anyways. High Betas and Gammas are cheaper and will deduct a second stat if your build doesn’t require it. These are good for freeing up cost in a build for more stats or parts, but you have to be careful with them because you can easily bring a stat in the negative by doing this. 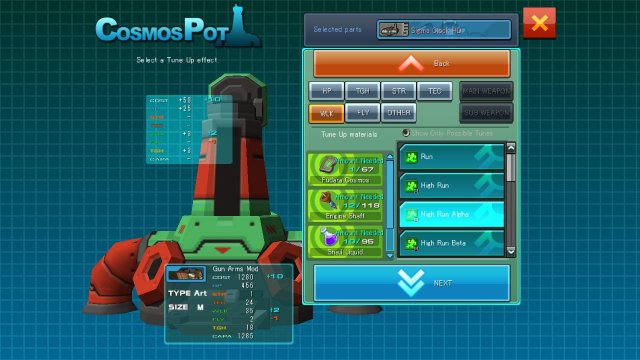 Mobility tuning got simplified, so every point in a mobility stat will increase your movement speed by a small amount. You want your mobility stat to be upwards of 30, because everyone else in arena is tuning their mobility to numbers like 38 or 40.

Hitting zero in either of your mobility stats will severely cripple the unit.

STR and TEC tuning are pretty much straightforward and you want as much of it as you can get. The more of it you have the higher your damage will be with weapons that scale off of that stat. Hitting zero in either damage stat will cause your wonder bit duration to end in a matter of seconds.

Manual Chat Input Type the command directly in chat and press Enter key. Pressing the Up Arrow key retrieves your last chat messages and can be entered again for repeating […]