Comprehensive guide to breeding and taming boars and wolves (and later lox).

Guide to Breeding and Taming

This are the videos of FireSpark81 which were a starting point for me:

For the Taming part it’s pretty good. I have seen someone who used a door instead of just place fences down while being hit, and I think that’s probably superior for boars. Wolves are sometimes reluctant to go through doors (while they are following you), so I’m not sure that’d be an improvement.

Also, another thing I saw from my own experience and which others corroborated on the discord was that you get more 1 and 2 star animals the further you get from your spawn point (I saw this further and at the border of the mountain biome, I’m not sure if higher level biomes also affect it).

Now for where the advances have been made.

First, one issue that FireSpark81 has is that he says in his boar video he can’t get the boars to breed with raspberries, though he can get them to breed a little with mushrooms and a lot with carrots.

I can get them to breed with raspberries.

The mechanic as far as I can tell is that various food gives different taming levels (we know 12% for raspberries, 13% for mushrooms and carrots), and that likely means it gives a differing amount of satiety which then lasts for a different period of time.

So if the satiety lasts longer, it means the boars have longer to breed, thus a higher chance to breed at all and are more likely to breed multiple times.

The other component to understand here is that he didn’t find the natural limit to breeding or how to reach it effectively, just that there likely was one. I’ve found it to be five in an enclosed space, basically the smallest possible area for the boars to be in (and also wolves). Now, it’s possible the limit is actually six, because there are occasionally boars/wolves that teleport out of the enclosure, and I haven’t even bothered with carrots or mushrooms consistently to test it, but I’m happy with feeding 2 raspberries to 2 boars and getting 3 new boars. Feel free to test this out.

Now the test I did for limit/space/food was making 2 X 1 and 1 X 1 squares of wood fencing, and by using raspberries and mushrooms in the various configurations. What I found was that although the mushrooms were superior when the boars were more spread out in 2 X 1, more consistently getting to the 5 boar limit, raspberries are able to get there consistently in a 1 X 1 space, so long as the boars both eat and aren’t stuck. Making the boars not get stuck is the next challenge, I’m setting my feeding wall to drop into the center, as one part of it, but it remains to be seen if in that close a space one of them winds up not being able to move (or because of how that particular fencing is). Wolves are spaced at 2 X 2 and it seems to work pretty well. I’m considering putting boars into a 1.5 X 1.5 or 1.5 X 1 arrangement, it’s really just keeping them as close at they need to be to almost always be in range of each other, but with some maneuverability. 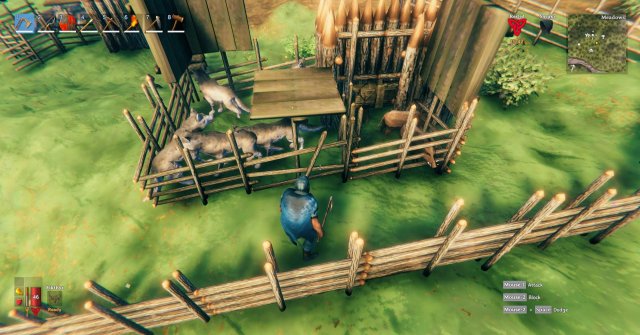 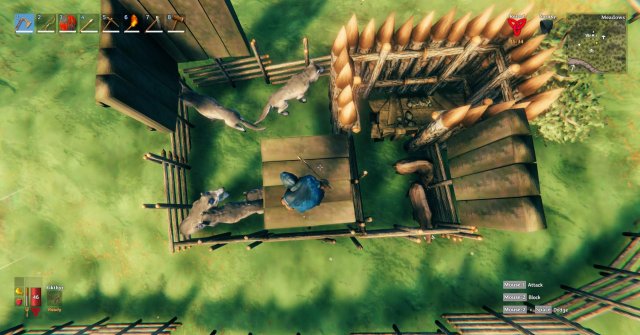 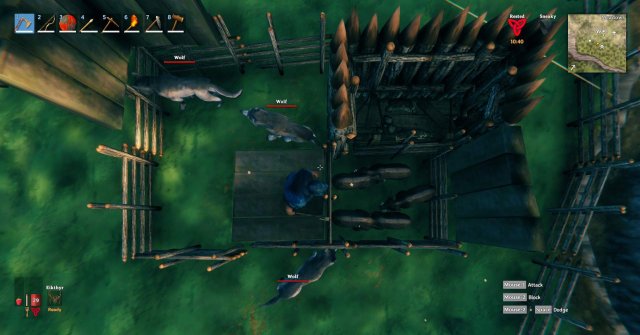 As you can see I’ve created the 2X2 for the wolves connected to the 1X1 for the boars, and it’s been no issue (these are in various stages of use, but I can have 5 wolves and 5 boars right next to each other, the limits for each animal are independent of each other.) I also have a platform to stand on with walls set up to bounce the food in when I throw it. Next I’m going to try to make the walls drop the food closer to the middle of the pen, in particular with the boars where it’s more of an issue.

One open question is how close a group of 5 boars/wolves can be to another group. My groups are fairly spread out, and I don’t have any issues that I have perceived with the current arrangement. People can experiment to see how close they can get them though. 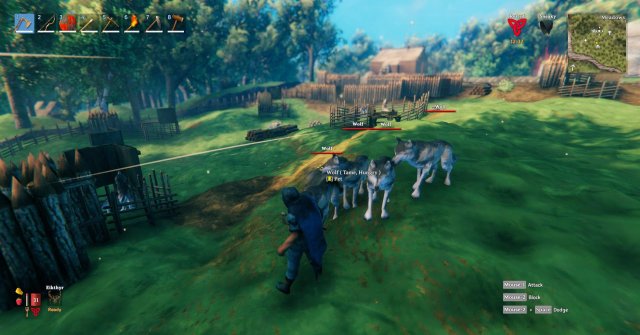 Also, I do still have issues with teleportation when breeding happens on the edge, and my individual enclosures are also fenced in, although I may be less strict about that as time goes on. Currently I’m populating my home island with wolves. It might be a fix if you raise the land around them, but then it would be harder to get them out. Or perhaps a double or triple wall.

Another issue which FireSpark81 just addressed in his latest video, and which I was only starting to get a handle on is breeding 1 star and 2 star boars/wolves. The consensus seems to be from the discord and elsewhere that if you have a 1 star with a 0 star, you get 50/50 1 star or 0 star boars/wolves. With 2 1 stars, you get all 1 stars. And FireSpark81 particularly showed that you can get 2 stars from a 2 star and 0 star, in the same (like 50/50) configuration.

Here’s his video on it, for reference

Another point to be made about breeding, In the taming video, it’s mentioned that if you feed the animal and then leave the area, the taming bar won’t advance. This was my experience too. Also, to add to it, if you feed two of them while tame, and walk away before they breed, they won’t, but when you come back, so long as they had gotten pregnant, they will still make the baby. I had that happen to my original wolf pair who I left in the mountain area, came back and was disappointed to not see 3 new wolf cubs, but one immediately spawned.

Also, there is no reason to keep any animal fed if you’re not breeding them. Being hungry doesn’t hurt them or make them untame. Food does however heal them, so giving wolves will restore 20 hp right away. Also, they do heal themselves over time, albeit slowly (it’s a reach, but not sure if this could be enhanced in some way like the rested buff / campfires).

I went out with about 15-20 wolves (0 star) to the black forest. They destroyed everything quickly, but when they ran into a troll, although they won with my help of shooting him, several died. I believe it’s more the area of effect nature of the attacks, and that they all approached him from one direction. I’m not sure how a (0 star) troll vs. 15 (0 star) wolves would do if they were able to surround him the open, I’m guessing a few would still die but they’d kill him.

Right now I’m just releasing wolves around my base for protection, they are very effective at hunting everything down (meadows), including chasing down deer. They also will occasionally eat their spoils, raw meat/neck tails, and thus could potentially breed on their own.

Also, when I do travel with wolves, I intentionally feed them and let them breed on the go, dropping off wolf cubs because i’m happy to populate the world with my tame wolves. 4 wolves is probably the ideal number for this.

Seed and Map Tired of having to scout over several islands with a boat full of delicious delicious amber and rubies only to be sunk by a pesky Serpent? Well […]

Valheim – How to Get Silver Equipment (Before the First Boss)