I found Radiation Rumble somewhat hard to play solo until I figured a few easy to do things.

I also think this is by far the easiest method of all I’ve seen. It let’s you harvest EXP from Ghouls until the event end but without harvesting any ore. (If you are good enough and fast enough maybe you can harvest ore too but I don’t bother).

Really useful if nobody joins or people who join are few and are letting the scavenger NPCs die the event or you play on your private server solo using Fallout First.

Turrets Are Your Friend

There are 3 turrets in total: 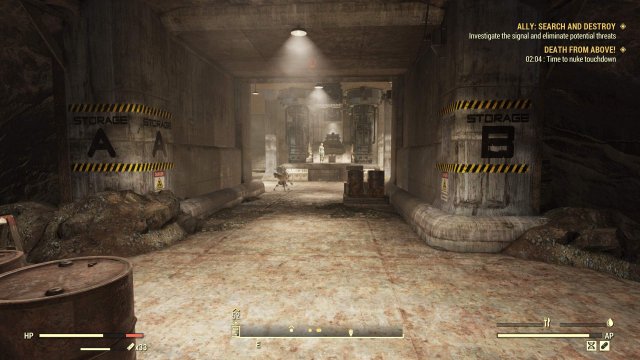 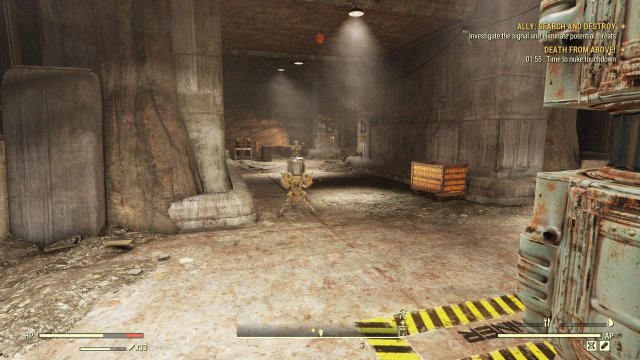 To make the event absurdly easy, your aim is to keep the turrets alive. Because the turrets AGRO all the enemies like honey attracts bears.

The turrets will inevitable become destroyed as you circle around killing ghouls for EXP. You will need to repair them. 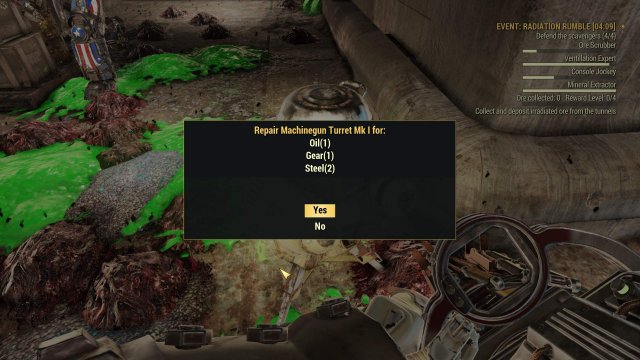 As picture shows you need 1 Oil, 1 Gear and 2 Steel per repair. Which is not much. You should have it if you’ve played for a bit even after selling all those items. I would say that all in all turrets will break around 10-20 times. But it could be more depending on how you play.

If I choose to stand I usually stand below the blue generator shown on the picture. It gives me ample room to see what’s happening on both sides and snipe all ghouls down. 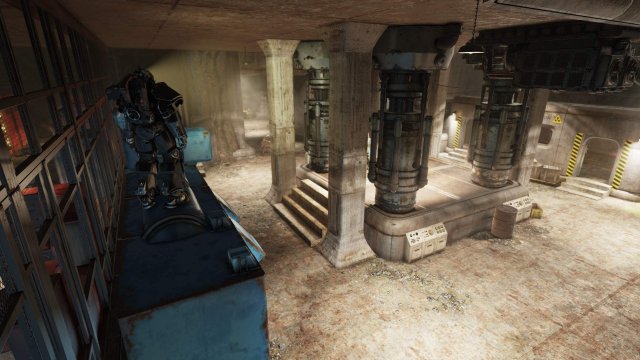 You can also just run round the columns in a circle shooting the ghouls and checking if the turrets are functioning (shooting, rotating, have a health bar and not just pointing down and sparking).

And I read guides that said turrets are bad. Well no, they are good. They put all the ghouls in the same spot for you and they KEEP them OFF the Scavengers. So if you have one of the AoE weapons God Rolls or Legacy guns you will just shoot in their general area for a few seconds and they will all die. So you just harvest the EXP off the turrets. And if you tag someone and the turrets finish them off, you still get EXP.

The only scavenger I really care about is the one in the center of the room standing between all 4 columns. I do not care if others die so long as I can protect this one, which I always can. But chances are others will survive too if you repair the turret in time.

Tha Aim is not to win the event, as without harvesting ore you won’t progress in stages and once the event time runs out it will fail, but you will have the max EXP. This is a great EXP grind and it gives you several levels per event.

Do not forget to group up with someone running a casual group for extra INT for higher exp gains, equip EXP perk card “Inspirational” but save your lunchboxes for when you do this during double EXP events.

Also, if your weapon is lacking stopping power use dmg chems and food buffs, bobbleheads etc.

And bring a lot of ammo, I MEAN A LOT. You gonna need it.

If you think you are fast and good enough maybe you can even extract the ore while turrets are holding the ghouls off but that is risky and you need to keep them repaired. I don’t bother.

The excavator Armor is one of the best looking Unique Power Armor sets in fallout 76, heres how to get it. Other Fallout 76 Guides: World Map. Quick Newbie Guide. […]

So to begin with, most of the returning players know the basics of getting around, resource gathering, and crafting. The newer players may not be so familiar so I will […]

Fallout 76 – How to Get X-01 Prototype Power Armor

This guide will tell you how to acquire the Enclave X-01 Prototype power armor schematics. How to Get X-01 Prototype Power Armor First get to the white spring bunker after […]