The polearms that are showcased here are all realistically F2P obtainable through crafting, gacha, or starglitter exchange.

A craftable reliable go-to for F2P players, as it will help Hu Tao get her E and Q quicker. Polearm users in general have low normal attack damage, so if you are lucky enough to get an extra prototype polearm billet from the weekly bosses, the potential for this weapon goes up with refinement, with the passive ability increased by double at max refinement.

I had some initial hesitation when I thought of the Crescent Pike. I’ve combed through wiki comments, zipped through reddit threads, drank until I was drunk at the Tavern, and plunged into the bowels of YouTube; the general consensus of the craftable needle is mostly negative on Hu Tao. People who nayed pointed out that Hu Tao’s focus was not on Physical DMG, but on elemental DMG, as her Paramita Papilio State converts her ATK DMG to Pyro DMG. The few people that did advocate it said that it would be good if you were doing a physical build for Hu Tao, in which case I think a full artifact set of Bloodstained Chivalry or 2 piece Bloodstained and 2 piece Gladiator’s that includes a Physical DMG goblet would do the trick. Also, the passive ability is nothing to laugh at with R1 giving you an additional 20% DMG for your normal/charged attacks, and it goes up with refinement, doubling at R5. But despite the great potential coming from its passive, the Crescent Pike is not ideal unless you are doing a physical build for Hu Tao.

Similar to the Prototype Starglitter, the gacha exclusive Favonius Lance gives you ER as a substat, which will help Hu Tao get her abilities quicker. The passive ability furthers energy regeneration even more, but in order for that to happen, it requires Critical hits, which relies on Crit Rate%. If you are planning to use this polearm, the general consensus is to have at least 50% Crit Rate on your artifacts in order for this weapon to work efficiently. I’d recommend for Crit Rate to be in the substats, so you could free your main stat for your circlet for whatever you want.

The bane of Gacha, it is also one of Xiangling’s best in slot. In my opinion, the EM substats are good for support while the passive ability is geared towards main DPS. It makes this weapon good for either support or main DPS. It now depends on which artifact set you put on Hu Tao. If you want to boost the passive ability for even more damage, then a full set of Lavawalker’s would do the trick (It increases DMG against opponents affected by Pyro by 35%). A full set of Crimson Witch of Flames would accentuate Hu Tao’s elemental capabilities, as the 4 piece ability not only increases the 2 piece ability (Pyro DMG increased by 15%) by 50% for 10 seconds (max 3 stacks), but it also boosts burning and overloaded DMG by 40% as well as vaporize and melt by 15%. All in all, I believe that this is a good all around polearm that will adequately showcase Hu Tao’s potential.

This is an exclusive banner weapon that will become unavailable after March 15, 2020 with no news yet on its availability afterwards. The ATK% substat will boost Hu Tao’s damage, but this weapon is situational and only effective if you build a team with Liyue characters, as its passive only benefits Liyue characters. Speaking of its passive abilities, it has a 7% ATK increase and 3% Crit Rate increase that stacks up to 4 times at Refinement 1. That means that the most you could get is a 28% ATK increase and 12% Crit Rate increase with a full Liyue team. While that seems reasonable, keep in mind that it gets even more powerful as you refine it, and at R5, you could get a 44% ATK increase and a 28% Crit Rate increase with a full Liyue team. From this perspective, it is safe to say that you would get more out of the Lithic Spear with refinement. So to sum it all up, unless you are planning to have mostly Liyue characters on your team, the Lithic Spear is not going to help Hu Tao very much as the passive is low even at R5 with only one Liyue character on your team. Team composition strongly affects how useful this polearm is.

If you are lucky enough to have some starglitter saved up, then the Blackcliff Pole is a hard won luxury. As far as substats goes, Crit DMG is one of the most sought after substat in the game. After all, who doesn’t want more damage? The most important thing is to get at least 50% Crit Rate on your artifacts in order for this to work uber nicely. It doesn’t matter how much Crit DMG you have; if you only have 10% Crit Rate, you won’t do anything. Aside from that, the passive is extremely OP, as it gives an additional 12 % ATK at R1 (doubles at R5) for 30 seconds after an enemy is defeated, up to three independent stacks. Constant ATK buff, everyone? 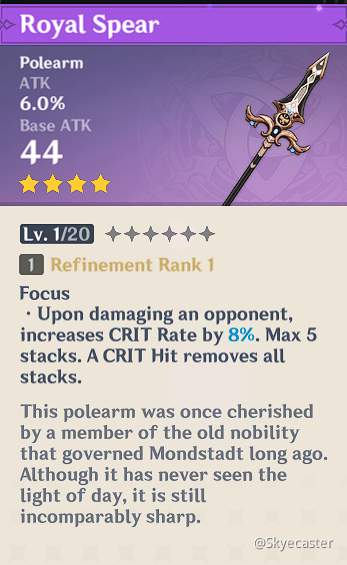 I did not have enough starglitter to get the Royal Spear, so this internet picture is going to have to do. Upon first glance, this looks to be the best weapon yet. The ATK% substat, as you already know, is very OP for Hu Tao, second only to HP%. The passive gives you 8% Crit Rate with an impressive 5 stacks at R1 and doubles at R5. A Crit hit removes all stacks. What does this really mean? It means that you could Crit at any time from stack 1 to 5, which makes things very annoying because you could crit on a normal attack right before you use your ult. Personally, I don’t really mind, because I’ll take critical hits any day. But if you are looking to instant kill, to get things done quickly, then the unpredictability of this polearm will throw you sideways.

I thought about including the Dragonspine spear here, but it seems to be more of a fit for the upcoming 4 star Rosaria. You could still use it if you want melt reactions, but again, it won’t be a good fit unless you are doing a physical build for Hu Tao.

I hope that this general guide helps you in your build. Keep in mind that specific team compositions make some weapons better and other weapons weaker.