Vishaps and Where to Find Them: Suggestion on How to Maximize Rewards

Hello, this is not that much of a breakthrough discovery but I just noticed that some people selected 1 S ranked, 2 A ranked and 1 B ranked areas in the event. Maybe they don’t really care about the rewards that much or just doesn’t log in frequently within a day but if we picked 1 S ranked and 2 A ranked areas, we will still have another expedition available for a day, what I’m saying is that if we claim that S ranked area (maybe) we can have another go at that area to complete the daily limit which is 4 expeditions/day.

Note: I am only suggesting, in the end you can still play the game however you want and if you don’t like some certain rewards you are free to do so and disregard the others in a higher ranked area. I didn’t really read much about the details of the event prior to its release, please do excuse my ignorance and correct me if I am wrong because it MIGHT not be possible to repeat the S ranked area, or some other restrictions are in place. I just came up with this to maximize the primogem rewards (S ranked = 20 primogems, A ranked = 15 primogems, B ranked = 10 primogems) since I am only a budget player.

I’m not really sure about it either so because of that uncertainty, I applied this strat in my main account and applied the rather plain strat (1S, 2A, 1B). Anyway, it’s been only less than 2 hours since the event started, hopefully things clarify themselves later on. 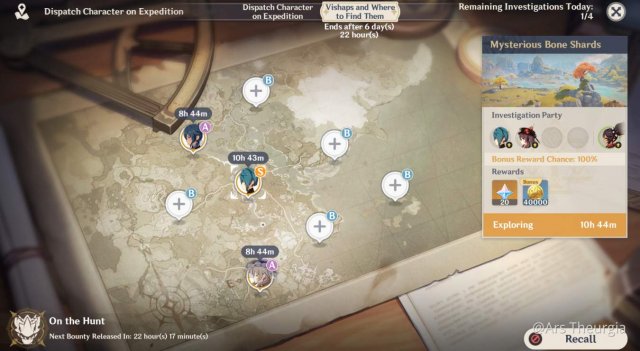 In the world of Teyvat, players can find hidden locations with ‘Dig’ prompts. By digging in these areas, you will uncover anything ranging from ocean crabs to treasure chests full […]