In the two hotfixes following launch, we also resolved two major issues which were affecting players. First, those who were unable to clean anything at all will now find that they will be able to wash without problems unless they are playing on extremely low-end hardware. Additionally, we fixed an issue where save data could become corrupted if the application was suddenly terminated. 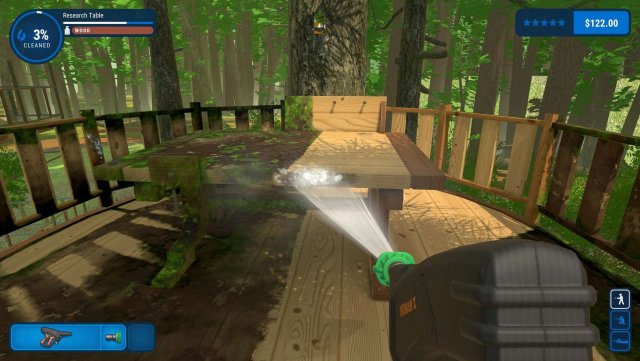 Each of these levels adds new story and challenging dirt to remove! Enjoy cleaning the intricate details in the blades, propeller and pipes of the Fire Helicopter. Revel in removing the dirt on the colourful and well-travelled RV. Climb to the peak of satisfaction in the Tree House where large amounts of moss can be peeled off like butter by the heavy duty power washer.

Added Challenge Mode featuring Time and Water challenges for the PowerWash Van (once that job is complete in Career Mode).

Are you up to the challenge? Earn a bronze, silver or gold medal based on your performance! The van and modes are just the beginning and we can’t wait to hear your thoughts on fun modes like these.

We do want to stress that the core gameplay focus will always be on zen cleaning but with these modes, we want to add some extra replayability to the levels. 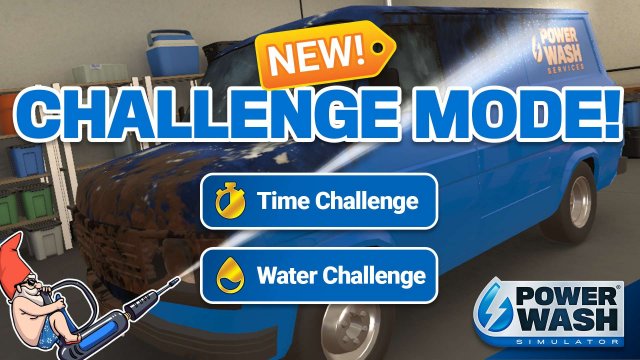 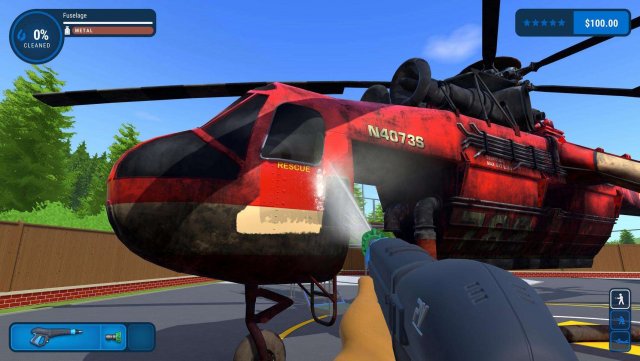 Our aim with this update was to fix certain gameplay issues which were giving players a bad experience.

Firstly the soap system was allowing players to spend more money (sometimes without realising) than intended, which prevented them from being able to purchase the more powerful Power Washers.

We addressed this by adding a limit to the amount of soap players could purchase, adding more text to the inventory screen to explain how to use it, removing the ability to purchase extensions and nozzles for washers the player doesn’t own, and adding a button prompt to refill when empty. Please keep the feedback coming and let us know what you think of the changes.

Another major headache our players were having was finding the last bit of dirt to complete a job. We want the game to feel rewarding, and part of that is doing a thorough job and tracking down the last bits and pieces. However, we appreciate that we didn’t go far enough in assisting the player and it was causing frustration.

First, dirt that is all but invisible to the naked eye should remove automatically once below a certain threshold which should reduce reliance upon the dirt highlight tool. We’ve also added a HUD element that appears and details the final 3 objects (or groups of the same object) when those are all that remains.

Next, we’ve added the ability to highlight the specific dirty object in the world by clicking on it in the details menu. Rather than simply highlighting the dirt, this will highlight the whole object so you can easily find the area you need to clean. Finally, we have slightly increased the duration of the “Highlight Dirt” functionality to reduce the need to repeatedly press the button.

We’ve also added changes for players suffering from motion sickness. Both adding a fixed crosshair option (it normally fades when firing,) and adding higher FPS options. Having a fixed crosshair can let players focus on the centre of the screen and notice the motion around the screen less. Players with higher refresh rates should now also get smoother movement on their monitors. In a future update, we’ll also be adding more FOV options and are looking at other potential solutions for controlling the washer/camera.

There’s a lot more to come during Early Access, and I want to mention that in particular, we’re looking to add control remapping as our next highest priority. While we have tried to get this ready in time for the update, unfortunately, it will take more time to implement than we had hoped.

We’ll see you all next time in our weekly developer log and look forward to start teasing the next content update! Enjoy the new patch!