In this guide, I share a map of all the Base Farming Levels of all the settlements in the game and explain how you can use it to access late game content earlier than your rivals.

Guide to Base Farming Levels

Base Farming Level and You

If you look at the settlement growth modifiers, there’s a lot of things in your control – namely the buildings in the settlement and the tax rate. However there’s one other modifier that is static throughout the whole game and no matter how hard you try, you aren’t changing it without modding the game. That’s the Base Farming Level.

Put Simply the Base Farming Level is how “good” the land the settlement is on.

Much of the content in this game is locked by the sizes of your city – you can only make the best units if your buildings are high tier, which you can only do if you have a lot of people, which you need growth to do that.

Here’s a map I made after digging in the game files for the Base Farm Level of each Settlement in the game. This information can be found at:

Sorry the map is really badly edited, didn’t feel like making it pretty – I just wanted a basic visual representation. 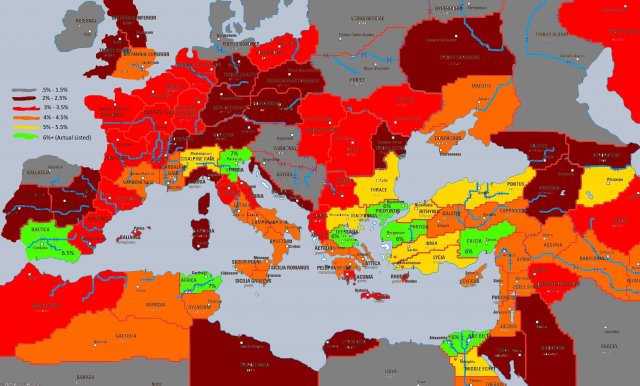 What I’ve learned from making this map is that – yes, Greece, Asia Minor, and the Nile Delta are some of the best provinces for growth in the game. Which I knew previously but the point of making this was to identify the exact provinces that had the best growth since I wanted to turn them into recruitment centers.

An interesting thing of note is that while the Eastern Mediterranean has some of the best base farming levels overall, The best provinces in terms of Base Farming level are only found outside of these high development areas.

The two provinces with 7% are: Patavium and Carthage. Corduba has 6.5%. And the rest of the green provinces – which are in the traditionally understood high growth areas – all have 6%

In case you’re interested, there’s only one province with .5% – and that’s Nepte.

How best to prepare for the Marion Reform, and how to manipulate the AI to your benefit. ContentsGuide to Late Game DominationIntroductionThe Set UpAthens – The City of GoldThe MeatgrinderThe […]

Total War: Rome Remastered – How to Be OP

A guide on the art of being way too powerful.  Guide to Be OP The OP Unit-Phalanx Hoplites are very powerful, and if they aren’t flanked or attacked in the […]

How to Cheat Introduction To start off you donkeys must learn how to hack the game to enter all your GTA cheat-codes and cheese your way to countless glorious victories. […]