In this guide I attempt to explain the basics of building your empire in Shadow Empire. In this guide, I will not include any settings or such and I only elaborate on the basic game mechanics and provide helpful tips.

Resources – Left Side of the Screen

The game may leave some players with the feeling of inability to act. Simply put, the game puts you in boots a few sizes too big.

But it is likely you see something like this as you start on the left side of the screen: 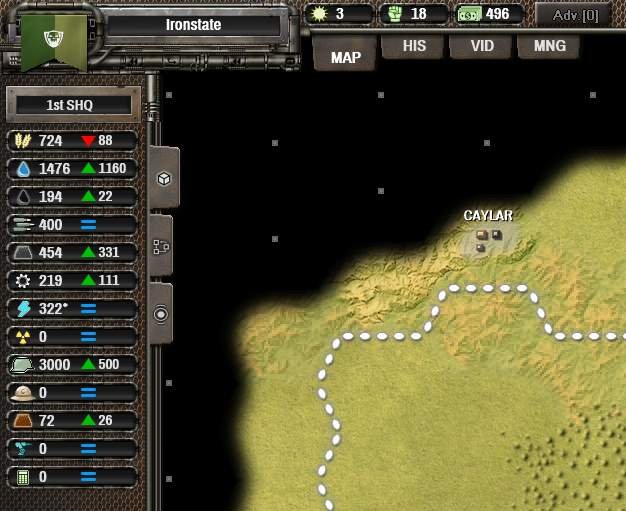 These are your materials, from top to bottom:

And at the top, we have:

From left to the right:

Use and Production of Resources – SHQ or Strategic Headquarters

Assuming you read the last section, you now should be up-to-date on the materials and what they are for, so now it’s time to use them.

In this section we will be walking through some of the buttons on the right side of the screen.

These here contain most actions and mechanics. First I explain the groups.

Headquarters are in essence the governing bodies of zones you own. Materials are taken to SHQ material pools and through interaction in SHQ, are used for various projects. There can be several, such as one for each zone. but I suggest using a single one, otherwise you’d have to arrange various logistics for materials transferring between zones.

Earlier, in materials, we talked about munitions and machines. They are produced in the first tab called “Workshop.”. 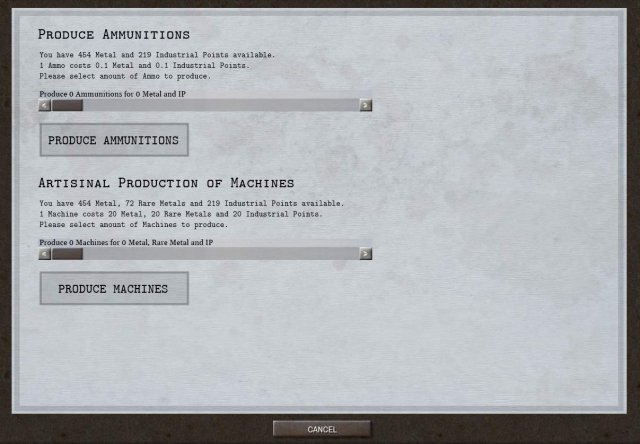 In here, you are able to produce ammunition for the troops or artisinally produce machines.

Ammunition is simple enough, as it takes industry output and metal to produce, but what about machines?

Atleast not yet. Make sure you always have some machines for use, as they are required for construction of facilities.

Second, we have “Repl. Troops”, in which all reinforcements are arranged. Instead of divisions taking forces directly from the recruit pool, they take them from the Replacement Troop pool.

In here, you have to produce the type of unit required for reinforcing. 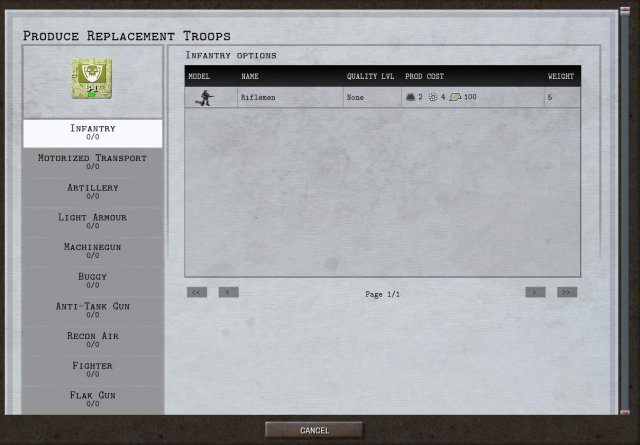 Simply clicking on the type of unit in this screen allows you to produce more, usually in batches of 10x or 100x. Each have different statistics, as each is a different unit design. They also have different prices for production, again in metal and industry. 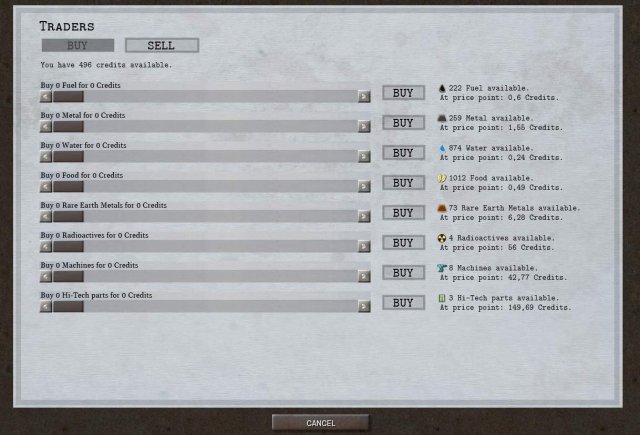 In the trade menu, you can both buy and sell any materials, provided the traders both have money and interest in doing so.

For example, you could sell all of your water and depending on the planet, for example, one with hard-to-reach water sources, it will be very valuable. Planets with water oceans put a low price on it. To put it simple: If you can have a ton of it with ease, so can the traders and private companies, and that defines the price of it.

I will not elaborate on the final SHQ button, “Transfer”, as it is a disgustingly complex mechanic of the game and can literally be ignored entirely.

Use and Production of Resources – The Zone

As said earlier, zones provide a lot of everything. But what is a zone?

Zone is a territory of any size with borders. They contain a single zone capital town, city or metropolis. Individual zones can form nations, and several can be part of a single nation.

Everything in the territory of the zone interacts with the zone capital. The capitals hold the population of the zone, despite the scattered small towns. More on them later.

Our zone in this guide is called Echomountain. 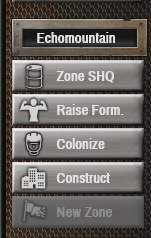 Under that tab are several buttons. The first one called “Zone SHQ” discusses the use of SHQs. It allows you to combine zone SHQs into one, if you ever need to, provided you made several. Protip: Don’t.

Right below it is Raise Form., which in essence means raising a military unit of any size. 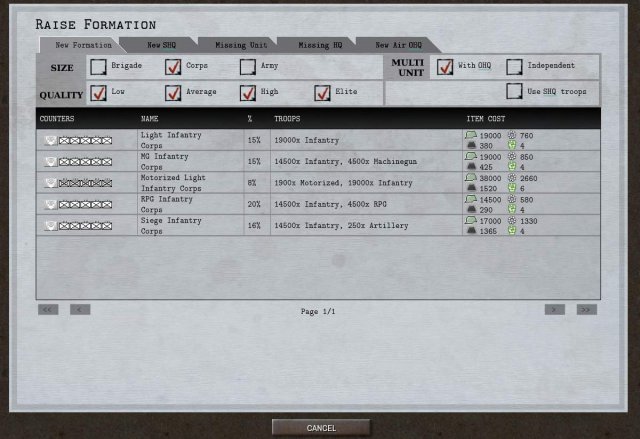 Currently, I am viewing Corps-sized military formations with OHQ.

OHQ simply refers to a military command structure. OHQs host commanders and generals, who can contribute to a fight with their strategic prowess or otherwise.

The current list of formations is rather short. That is because these are OOBs. OOB stands for Order of Battle, which in essence is a command structure. More can be researched, though you can always use independent formations.

Independent formations are usually cheaper, but they don’t allow for using a commander.

Next button is colonization. You will be able to place colonists to the location of the SHQ (Which is likely at all times your starting zone.) which may vary, if you are using several SHQs. If you have no interest in using SHQs, colonists are not useful. Why? Because you can also colonize using recruits. Recruits are a more versatile “material”, as they can be used for military when need be.

Colonizing is good for when you have plenty of surplus manpower waiting in pools and you lack private or state workers. More on both later.

This is where the first things you do happen. After selecting a tile on the map and simply pressing “construction”, a window opens. 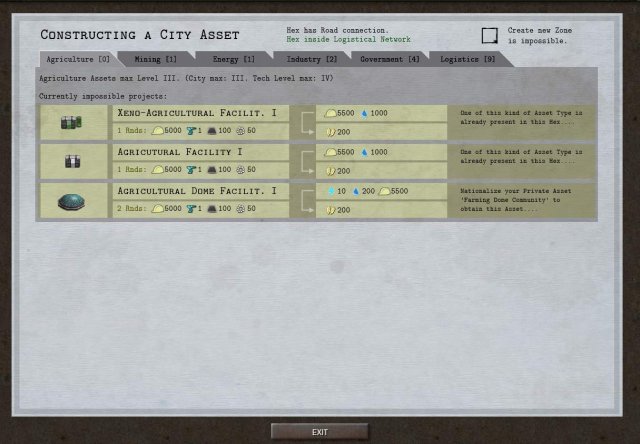 Since I had my zone capital selected, I can build certain goodies.

Such as industry in the industry tab or recycling centers in mining tab. This game is after all post-apocalyptic, so it is important to salvage the world of the past. It is a nice way of gaining emergency materials, should others not exist.

In the government tab you may build various services, such as hospitals or barracks, if you have the technologies open. In the beginning, though, only bureaucratic offices, High Command HQ and Rad Treatment centers are available for construction.

Meeting the Demand of Materials! Round One Priorities

If you have read the text prior to this and seen the screenshots, it means that you are ready to survive. This short guide will help you meet the demand for various materials, us referencing the screenshots of other sections. This way I can prepare you for upcoming things.

At start, you may not have everything you need: Food and water stockpiles may be decreasing or in general, there are untapped materials in the world. Firstly, we will attempt to meet the demand.

If you can’t meet the demand for food or water, it is time we expand our production.

Food can be farmed in farms or in hydroponics. Both can be built, preferably around capital city hexes. Start by selecting the hexes and building a farming facility in Construction > Agriculture.

Note that all buildings have a per-turn cost and construction time. Agricultural Dome Facility 1 for reference costs 5000 workers, 1 machine, 100 metal and 50 industrial output. This is relatively cheap and something you can build almost always at game start.

Workers may confuse you, so it is best I explain them to you now.

This here is Echomountain. There are various tabs for controlling the currently selected hex, but now we focus on the city hex. Zone info can be viewed on any hex within the zone, and not only in the capital city. You see several values in there, but the most notable ones are below the city size value.

The one immediately under it is the amount of free citizens. In short, not everyone after the apocalypse joins a bigger city. There are “Freefolk”, who choose to stay in their small towns spread across the zone. They can join up or make your citizens flee, based on whatever is going on in your zone. They also work “private jobs”, which is an important thing once your private economy starts to boom.

Below them are workers, who in essence are people who work for you and only for you. In the screenshot, you can see that the amount has gone up by 2000. This amount is directly deducted from free citizens, so don’t be alarmed if you see the amount of citizens decreasing and workers increasing.

Having explained workers, it is time we return to building things.

You are free to start the construction of the farm. Other materials like water and metals are found in sources across the map. Hexes may contain materials, indicated with a small material symbol. Metal hexes have a metal icon, water hexes have water. Simple.

Next, you need industry. As said earlier, industry is required for nearly everything and can only be built on zone capital hex. Go ahead and do that. Unlike the agriculture dome, industry only consumes electricity, as is indicated next to the build button.

All facilities have a small road built to them automatically. As roads cost industrial output (Can also depend on location, harder-to-reach locations like mountains are very expensive to build on.), it is smarter to build around already-existing infrastructure.

Take your first steps into the Shadow Empire universe with these guides to your first turns. ContentsFirst Turns Checklist – Turn 3Check for Enemy MovementsLearn Combat BasicsManage Your Factions’ DemandGeneral […]