Since I love this game and some folks seem to have some trouble getting started, I wanted to help out, since it’s always nice to have the same info presented in different ways.

Note: This only really addresses the Standard mode on Reasonable (and Forgiving, I assume) difficulty. Campaign missions and Endless mode have their own idiosyncrasies and specific strategies to keep in mind.

First off, if you are having any trouble, make sure you are planning ahead at least a little bit. You cannot remove anything you build, including Slipways, so it’s important to not make hasty decisions.

To get a foothold on a new map, I usually plan out a Core Loop – a self-sustaining resource cycle – before building anything.

Employment for your Colonists, if they aren’t already occupied by one of the above. This is another requirement to reach Successful, and increases Happiness.

The specific planets and resource types will change depending on availability, but you should be able to plan out an initial constellation that is self-sustaining – meaning none of them remain Struggling by missing Needs. But in the end, it’s actually okay to leave one or two planets Struggling, especially as you’re learning the game. Just make sure when planning out the loop that all of the connections of the constellation are possible, given that Slipways cannot cross each other.

Also, you definitely do not need all of the above to get started, but each component helps.

Here’s an example play-by-play from a completely random game I started up for illustrative purposes. It ended up working out extremely well – but I think this kind of start should be possible on most Reasonable maps. 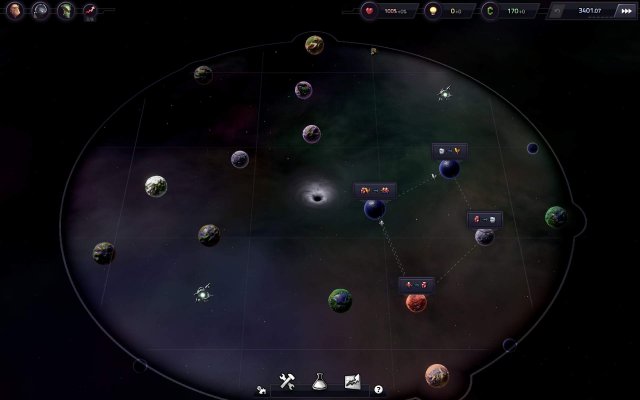 Planning out a Core Loop – maybe not the optimal one, but it seems strong. 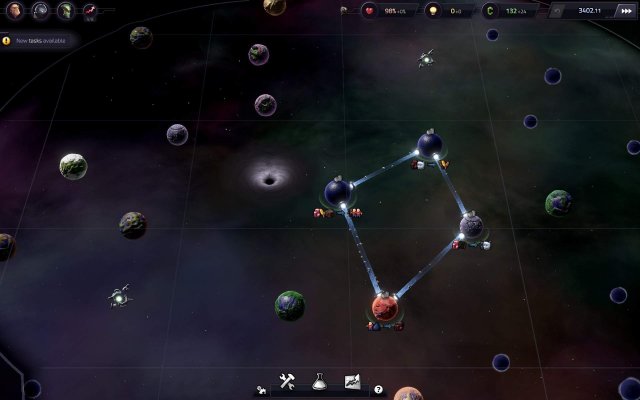 All Established, no-one left Struggling! But we can do even better. Also, with the planets built, we’re reminded of their secondary needs – more on those later. I might want to hook up the Ocean Farm with minerals from the bottom world – but there’s something I want to prioritize first. 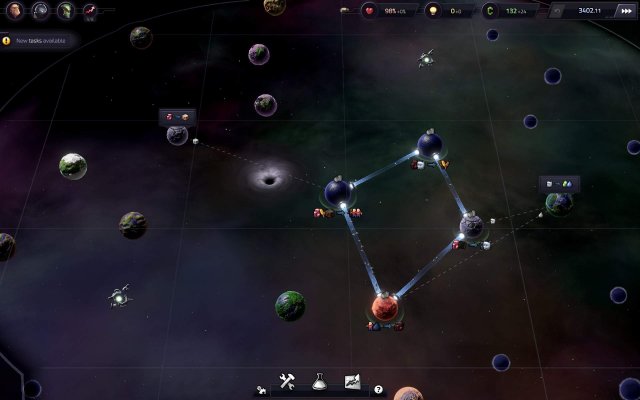 Planning the next move – the Colony has access to another Forgeworld that can produce Goods to ship to the Colony, but that will require a Mineral. My Mineral world would need some water to get to Successful and produce an extra resource, but I can get that from the Swamp on the right, enabled by the Robots next door. 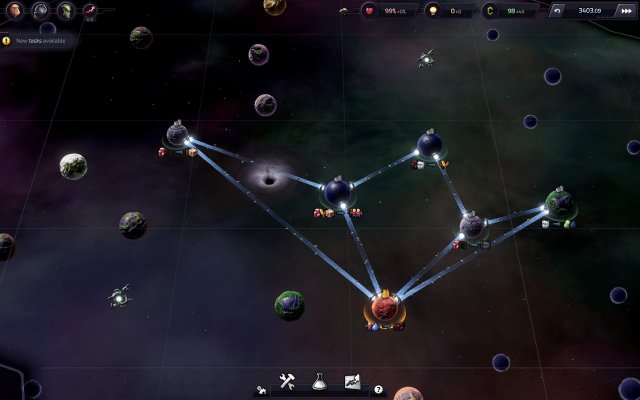 And in our Third year, we have an income of +45… not bad! With the Goods, you’d expect our Colonists to be happy and successful, but they aren’t… what’s missing? Employment! We’ll fix that in the next step.

After I have a good Core Loop going, one my next two steps might come in either order, or might be codependent: pursuing initial Council Tasks, and getting Research going. 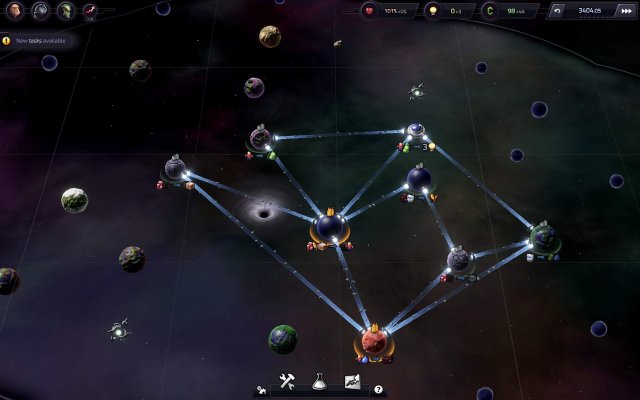 With a leftover Slime and some Primordial Planets nearby, we have our first Lab before our Fourth year is over! Now we’re reaping in 3 of those sweet, sweet lightbulbs. And if I can find a way to get People to that other Primordial world, I can pump out 2 more of them! It isn’t always this easy though – this might literally be my earliest-built Lab.

After you have a solid core with a lab, you can start building out your network in a piecemeal fashion. But Where and Why and How?

All other things equal, I usually end up building toward my current Tasks. They provide a nice guideline when I have too many options to choose from.

But as another good guiding principle (which might sound trite; I prefer “meaning-dense”):

Try to make Established planets Successful. When building a new planet, plan how to get it to Successful, and if it can be linked to as many other Successful planets as possible. If it can’t, look for an alternative configuration. Yes, this becomes recursive, but I trust you to feel out where it should stop.

Learning how to see what is needed to do this, and sticking to it, will eventually lead to Happy, Prosperous planets, a major source of score.

Tips for Success Avoid unhappy planets like the plague. Only colonise if you have a plan to provide for that colony, unless you really have no other choice. It’s good […]