This guide covers from game start to the first point you can spend XP.

How to Create Character

The first two choices you make are Career and a Focus. The first choice you make – Career – decides your Attributes, while your second choice decides your Skills. Additionally, the Focuses all share commonalities.

As an example: all Athletes start with the same Attributes (3/2/2 1/1/3 1/1/1). Bookies, Broadcasters, and Journalists all start with the same minimum Skills (Athletics 3, Clandestine 1, Survival 3, Leadership 1, Persuasion 1, Awareness 2) – however, the three Focuses are all a little different. Bookies get an extra rank of Clandestine and two ranks in Intimidation; Journalists get a point of Leadership and two in Science & Technology.

Keep in mind that Attributes and Skills are weakly linked – that is, the Physical Attributes (Strength, Dexterity, and Stamina) are frequently – but not always! – used in conjunction with the Physical Skills (Athletics, Clandestine, Combat, and Survival). As an example: melee combat tends to be Dexterity + Combat; but shooting a firearm at a monster charging right for you might be Composure + Combat.

This table breaks down all the possible starting combinations. 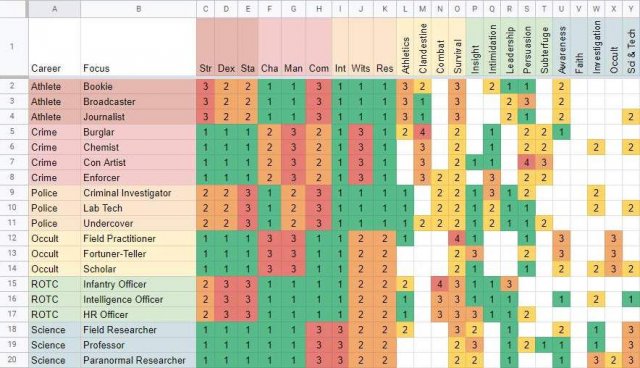 The next four choices you make augment the previous selection of Career and Focus.

The second choice (“personal charm, always providing comfort in times of stress”) is also pretty clear: if you pick the Power Crystal, you get a rank of Occult. Choosing the Double Helix nets you a ran of Science & Technology.

The third choice (“in high school, you were most like…”) will augment your Attributes. Adam is Physical (+1 to Str/Dex/Sta); Sarah is Social (+1 to Cha/Man/Com); the “Both” choice boosts Mental (+1 to Int/Wits/Res). The Free Spirit choice adds one point to Sta / Com / Res.

The fourth choice (“you remember working for…”) impacts your Backgrounds, like the Contacts / Influence / Resources choice from earlier. It’s also pretty clearly stated in the text; working at the Farmer’s Market yields Influence, working for the First Bank produces Resources, and working with the Sheriff’s Office gives Contacts. This choice is only worth one point each.

This chart summarizes the options. 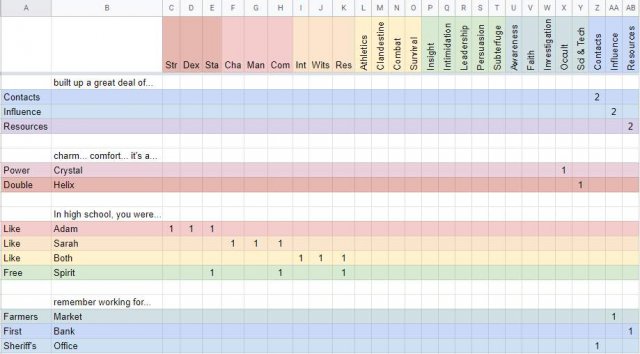 “Friends Would Teach You Things…”

This is where you can lose out on some points, so you need to be a bit careful.

After choosing the eight Skills to advance, you’re going to pick the kind of store your grandfather had. Among the many choices, some will grant you a point of Occult or a point of Science & Technology. If you’re already at five (5) ranks in that Skill and you pick that shop type, you will not gain a sixth rank – that is, the point will be lost.

Even if you’re planning on getting five ranks of Occult or Science & Technology, don’t pick that fifth rank right now. Pick it up when choosing your grandfather’s store.

Lastly, keep in mind that raising Skills in this game costs XP. It’s much more expensive to raise a Skill from rank 4 to 5 than it is from 0 to 1. It’s cheaper to specialize your character here, and then branch out as you earn XP throughout the story.

Most of these options just impact your Backgrounds (Contacts, Influence, and Resources); however, a few will grant you a rank in Occult, Science & Technology, and one will even grant a point of Faith. This is the only way to gain Faith without spending XP later; however, 1 rank of Faith is very cheap (3 xp). So if you’re looking to make the “most” of this choice, you’ll probably want to be picking one of the Occult or Science & Technology options (or one of the Backgrounds, if you don’t care for either of those Skills).

Worth noting that it’s pretty valuable to have ranks in either Occult or Faith.

Here’s the breakdown of Grandfather’s Store to what benefit it gives your character.