A guide detailing secrets on the world map, as well as marked locations for hidden coins throughout the isles. Based on personal discovery and with the help of others, this guide details secrets throughout the game. Will compromise wholly by screenshots taken on the field.

Before you make your way out into the world, be sure to complete the tutorial!

While it may seem possibly redundant now that we all know how to properly make it through a hurdle thanks to the efforts of a game journalist, you obtain your first coin here. 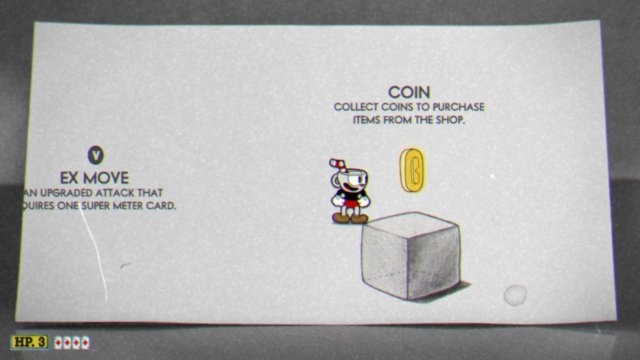 After leaving Elder Kettle’s house, you will be introduced to the world map, where you can interact with NPC’s and enter levels.

Without further ado, here is a (possibly not-so-hidden) path you can take.

Follow along the river and head north until you come to a natural overpass. 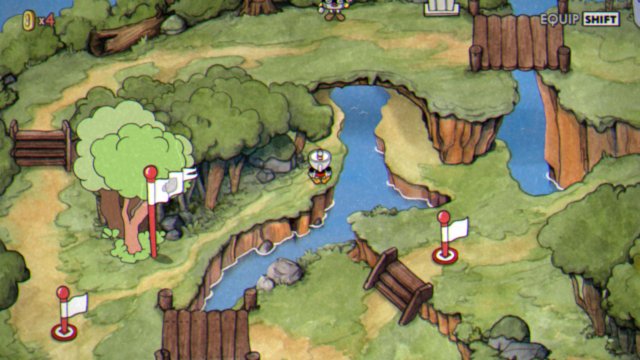 Simply head up and hang a right along the bend the river makes, and you’ll find yourself here. 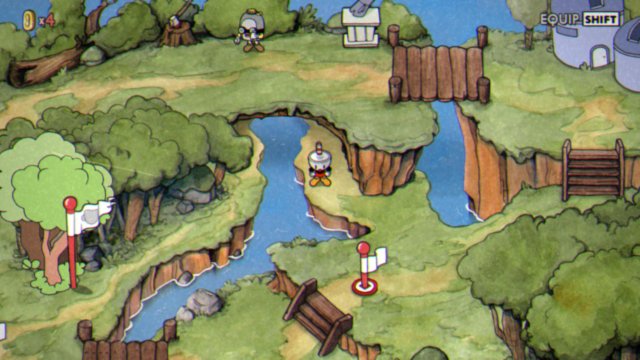 If not unlocked already, you will get the “Corner Cutter” achievement for discovering your first shortcut.

There is a hidden coin you can add to your collection here.

First, find Axeboy, and look to the left of him towards the branches. 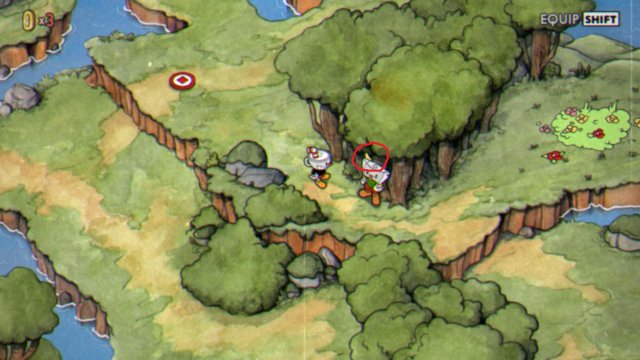 He’s currently blocking the way to the coin, and he speaks ill of the casino debtors giving him a hard time. Speaking of which, you’re probably heading towards one of them now.

It is imperitave that you defeat all bosses in the area for him to move, and he should move just slightly for you to get at the coin. 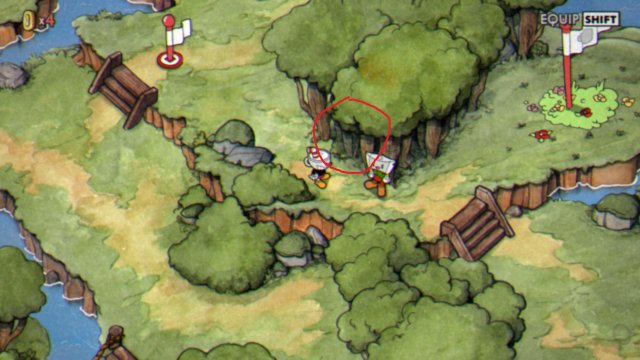 You will now have recieved the one hidden coin for this area, but be sure to talk to people and see if they’ll give you a coin for your troubles.

The second area is a carnival-like setting. There are secrets to be found here, too.

As soon as you enter the area, you will no doubt have found the barbershop trio, who are missing their fourth man.

You can find him after the Madame Von Bon Bon (Sugarland Shimmy) fight. Examine the tent to the left shown here. Go to the back and around, and you should find him. (Believe on me this, please.) 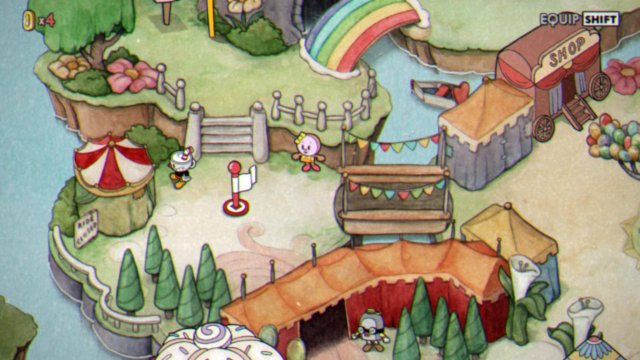 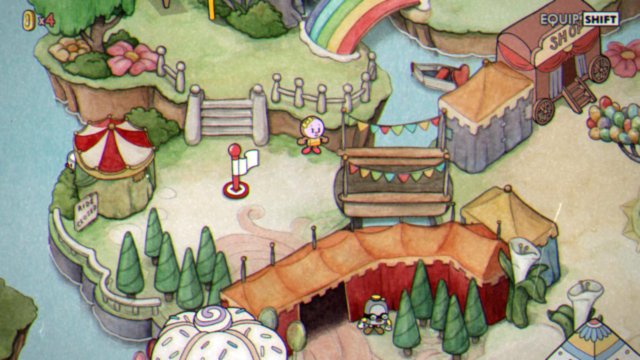 While you do not get a coin out of this, you can be treated to a song performed by the (now reunited) quartet.

You can discover a hidden path here, as well. 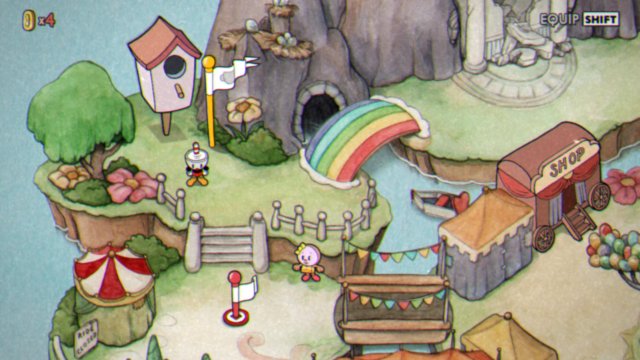 You can go around and behind the bird house, and travel behind some mountainside and find yourself on the other side of the map. 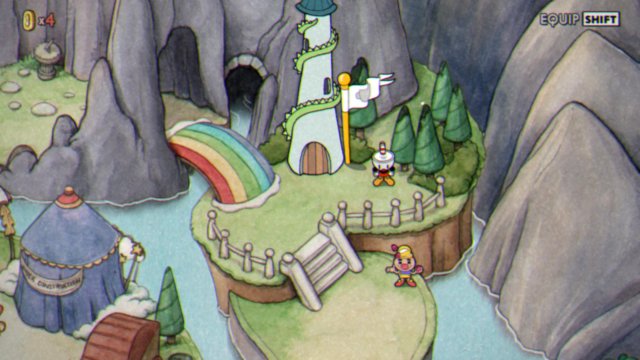 Return and speak with the candy girl next to the “Aviary Action” area, and she will give you a coin for your troubles. Also, you can speak with the juggler after you have successfully parried four times in a row without touching the ground, and you can get a coin as a reward.

A coin is hidden behind this shack, approximated by red. 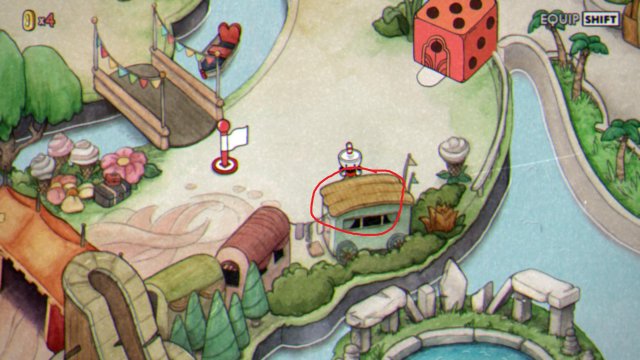 Another one for your collection! Now, on to the next area.

The big city has its fair share of hidden goodies

A hidden path near the junkyard can take you to the theater, bypassing several bosses and levels.
Make your way to the junkyard. By past experience with things not being as they seem, walk under the crane… 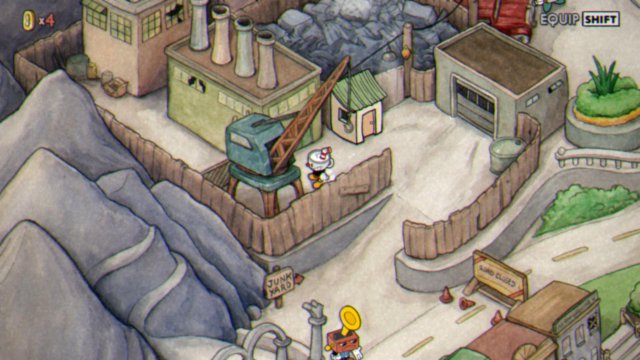 …and make your way around… 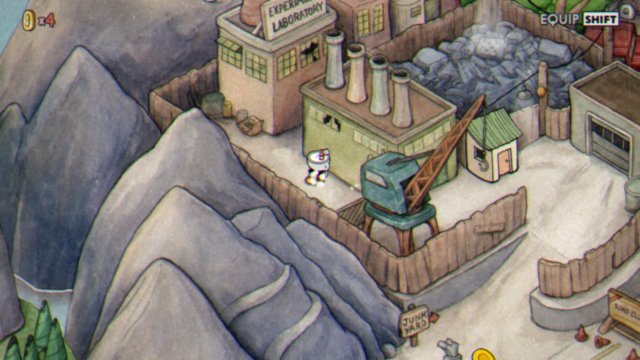 Until you’ve reached the theatre! 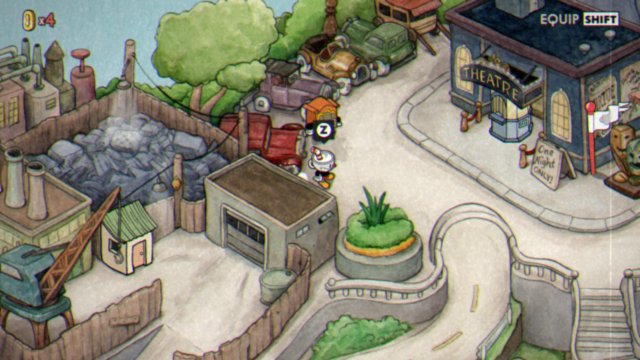 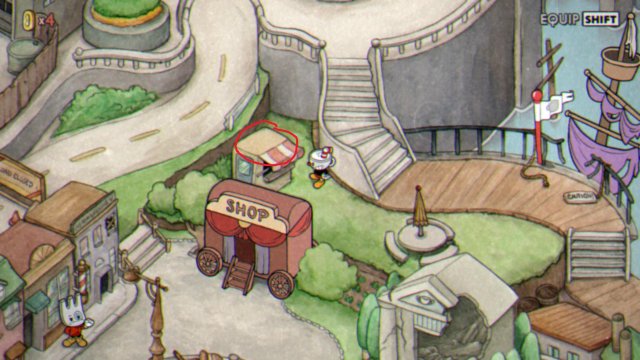 Now.
Now we have reached the absolute.

A sincere thank you to user Moonmadness, who shared the last hidden coin!

Enter the underworld, and approach the casino. The last hidden coin is found to the left of the dice walls, shown in red. You may need to fiddle a bit with the locating, but you’ll eventually find it. 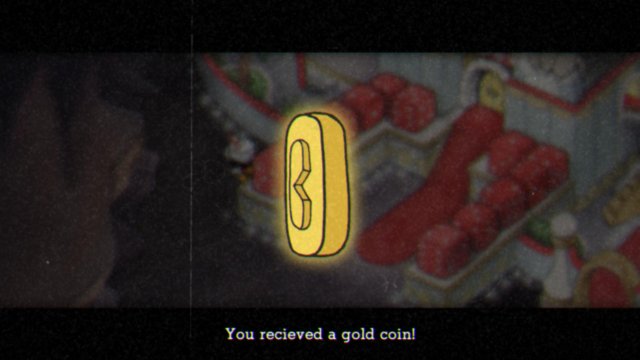 If you have obtained all coins from NPC’s, and fought tooth and nail to collect every coin on the level, you will have obtained the “High Roller” achievement for every coin pocketed. Go, and purchase that upgrade that has been taunting you!

There are two NPC’s that hint at potential quests, and are hinted at their achievements.

Cuphead – How to Beat Cagney Carnation

This is a guide for those who need help with the flower boss, “Cagney Carnation”. Please feel free to tell me below if I missed anything, and I would be […]

Cuphead – How to Beat the Devil (Final Boss)

How to beat the Devil (boss) from Cuphead. Other Cuphead Guides: 100% Achievement Guide. How to Beat Cagney Carnation. How to Beat Ribby and Croaks. How to Beat Beppi the […]

Cuphead – 100% Achievement Guide (How to Unlock All)

A guide on how to challenge the devil and hit the jackpot! Other Cuphead Guides: Ribby and Croak Guide. Cagney Carnation Guide. Story / Unmissable Achievements Taking Names – Defeat […]