What’s this guide all about? This guide is about diffrent jumping techniques like the double jump
and the Hook jump. Their main application lies in both speedrunning and sequence breaking.

Before we start off, we should mention a few important things. First, we highly recommend using a controller instead of a keyboard + mouse. In this guide, we’ll assume that you’re, in fact, using a controller.

Secondly, this guide contains a series of tricks and techniques related to jumping and wall jumping. None of these techniques are necessary to get a 100% in-game. Their main application lies in both speedrunning and sequence breaking, and should drastically increase the replay value of Steamworld Dig 2. On a seperate note, you can find the Steamworld DIg 2 speedrunning leaderboards here.

Finally we’ll need to talk about controls and button mapping. Double Jumping, one of the most versatile (and broken) techniques explained in this guide, requires you to press the jump button twice on consecutive frames*; something that is exceedingly impractical to perform using standard controls.

thankfully, Steamworld Dig 2 allows you to change your own controls, allowing you to map any action to a maximum of two different buttons. As you’ll see in the later parts of this guide, this will allow you to get around the practical issues of Double Jumping. We recommend configuring the jump action to tthe A and Right Shoulder buttons, but feel free to experiment with your own configurations.

Let’s start with a very short recap on the standard jump.

Steamworld Dig 2 operates on a rather simple principle, where your horizontal running speed determines the amount of vertical height you get from a jump. Jumping from standstill gives you about 1 tile of height, jumping from full sprinting speed gives you about 3.1 tiles of height.

With 3.1 tiles of height, you can barely reach the sides of tiles 4 tiles above you. This allows you to wall jump off these sides, which you can use to gain even greater heights. Note that this would not be if you would only have 3 tiles of height. Later on, you’ll be able to use Sprinting Double Jumps to reach heights up to 4.1 tiles of height.

The first is your standard, run-of-the-mill wall jump you’ve been using the entire game. There’s nothing wrong with it, but there’s nothing special about it either.

The second is a special, momentum-conserving wall jump. This is a special kind of wall jump that conserves all your current horizontal. This allows for a wall jump with a slightly higher reach, along with a few other tricks that we’ll elaborate on in the next section.

To perform a momentum-conserving wall jump, run toward a wall and jump on it. immediately after touching the wall, press A and reverse the direction of the analog stick at the same time.

Please note that you can only chain multiple momentum-conserving wall jumps by jumping between two different walls. You cannot chain multiple jumps while jumping up a single wall.

Let’s put this knowledge to the test with the following exploit, that allows you to enter the Temple of Guidance from upper Yarrow without needing the hook shot.

Remember those times when you’re wall jumping up a single wall, when you suddenly see a single tile blocking your way up? 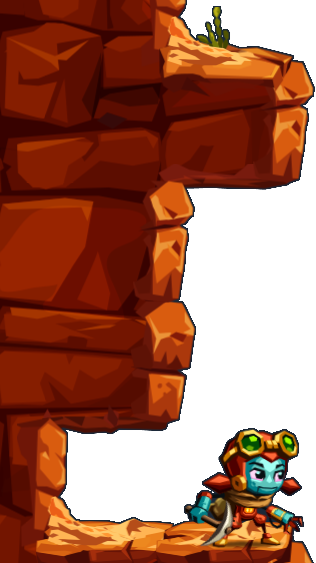 As ot turns out, you can use a very precise wall jump to climb that single tile. This technique is known as a “Corner Jump” or “WJ”.

The timing on a corner jump is fairly strict and tricky to pull off. We assure you that it gets easier with practice and patience. When performing a corner jump, you should always keep two things in mind.

1. You should start a wall jump about 1 tile underneath the ledge. If you start too high, you’ll bonk your head against the wall and fail the corner jump.

2. When you start a wall jump, immediately push the analog stick in the direction facing away from the wall. This is necessary to clear enough horizontal distance to clear the corner jump.

Let’s take this newfound knowledge to the test with an example.

Accessing the Deathplosions blueprint at the start of the game early

To the upper left from where you start the game, you’ll find a secret that gives you the Deathplosions blueprint and 1 x Ametrine, worth 50 gold. We can actually reacht his area in the first minute of the game using 1 double jump and 2 corner jumps. This place also doubles as a nice place to train corner jumps, since the game gives you invincibility at the very start of the game.

While attempting these corner jumps, keep in mind the two guidelines from the previous section. Start your corner jump at about 1 tile below the ledge and, after starting your corner jump, immediately push the analog stick in the direction facing away from the wall.

Double Jumps and Sprinting Double Jumps (hereafter refered to as “DJ” and “SDJ” respectively) are two techniues that rely on the same principle. By pressing the jump button twice in a very short amount of time, you can drastically increase your maximum jump height.

Pressing the A button twice in a short amount of time is technically possible, but highly impractical. The timing is frustratingly hard to get and, since you’re so focused on the jump button, doesn’t allow room for finesse. Luckily, we can work around the practical issues by remapping the jump button to two different buttons.

To perform a DJ or SDJ, tap and release the first jump button, followed by pushing and holding the second jump button IMMEDIATELY thereafter (but not at the same time).

Performing a DJ requires you to sprint at maximum speed. While sprinting, tap and release the first jump button, push and hold the second jump button immediately after that. You should be able to reach a maximum jump height of 4 tiles.

To perform a SDJ, you have to sprint at a speed right below maximum sprinting speed. This seems paradoxical, but this will allow you to reach even greater heights than a normal DJ. While sprinting at this speed, tap the first jump button, push and hold the second jump button immediately after that. You should be able to reach a maximum jump height of 4,1 tiles. This may seem like an insignificant increase compared to a normal DJ, but the extra height allow you to wall jump off ledges 5 tiles above you.

Other variants of Double Jumps

Though far less common, it’s also possible to double jump at pretty much any horizontal speed. It’s even possible to use a variant of the Double Jump without the sprint boots.

To show the versatility of DJs and SDJs, let’s examine one of the most useful sequence breaks of the game, which allows you to enter the lower part of Yallow early.

The Yallow area can be divided in a upper and lower Yallow. Normally, entering Yallow requires either the jetpack or the grenade launcher. Let’s take a look at the entrance to lower Yallow.

Note that the opening at the top lies at a height of 5 tiles. As we’ve discussed in the earlier section, we could use a SDJ to get to a height of 4,1 tiles, high enough to perform a wall jump on the side of the opening.

We’ll finish up this guide with one final exploit that will allow you to enter the Temple of Guidance right after obtaining the sprint boots at the start of the game. This effectively allows you to skip the first boss and a fair bit of early game digging in Archaea.

The route to the Temple Access tube is blocked by a series of walls that usually require the jackhammer to get through. A bit higher up, towards the ceiling, you’ll find a secondary tunnel that isn’t blocked off, but requires a WJ to get to. Climb the wall and perform the WJ, as shown on the following demonstration.

For this, you’ll need help from a rather obscure movement mechanic involving water. If you press the jump button at the exact moment where you’ll touch the surface of the water, you’ll jump away from the water while conserving all your horizontal speed. We can use this technique in order to get to the ledge on the right side with the right amount of horizontal speed.

Full map of all areas. Includes the location of all items/abilities, all upgrade cogs (77 on the world map or in caves, 7 from Trader Carson in town) and all […]

How to easily get the LAZY PERSON achievement in SteamWorld Dig 2. Image Walkthrough Head to the Temple of the Destroyer to the location marked on the map, right at […]

A visual guide to grabbing the O Brother, Where Art Thou? Achievement! Video Guide To get the achievement, you have to find all three of the missing Yonker brothers. They’re […]