There be spoilers here!
Contains information about all achievements.

Beat the game on “Bring ’em on!” difficulty or higher

Beat the game on “Do or die!” difficulty or higher

Beat the game on “Call me Terror-Billy” difficulty or higher

I am death incarnate!

Beat the game on “I am death incarnate!” difficulty or higher

The “Mein leben” difficulty level is unlocked after completing the game at least once and is a one-life no-save mode. Good luck friends.

During the opening sequence, you’ll be forced to choose between Wyatt and Fergus like in the first game. Choose wisely. (Actual choice doesn’t matter for the achievement.)

Use the power armor

Right after the scene with Caroline and whoever you chose earlier, you’ll get into a suit of armor. Can’t miss it.

Soon after, you will have to enter Section F to find the nazis who have been hiding on your U-Boat. Just keep following the story.

After traversing through Manhattan, you’ll get this when you meet Grace at the top of that mile high ladder.

After going to Roswell, you’ll meet up with Spesh and you’ll head into Area 52 to deliver the nuke.

After detonating the nuke, you’ll return to your childhood home. Here you’ll meet your Dad again. Make him pay for all he has done.

Get a new body

Oh man, crazy right? Blew my mind yo, or it would have if it wasn’t saved just in time. Also it doesn’t matter what upgrade you get at this point, since they all have their own achievements.

Achieve the highest score in the Shooting Range

After clearing the nazis out of Section F of your U-Boat, Set will ask you to take care of a drone in his shooting range. Do that, then complete the shooting range.

The score you must beat for this is 375, which can be seen on a blackboard in the room upstairs from the range. This isn’t too hard to beat, cause you can still get it even if you miss some targets.
The targets seem to come in groups of four, where each group gives 75 points.

You get points no matter where you hit them, so no need to aim for headshots. 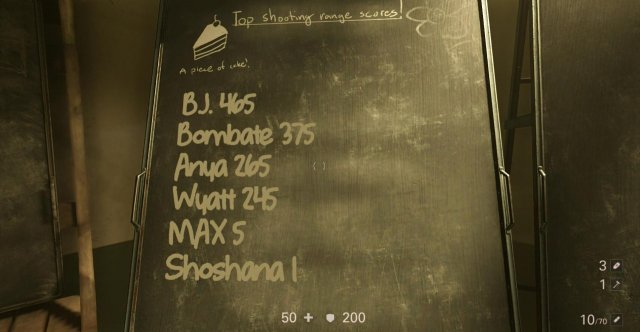 When you see BJ.’s name at the top of the board, you’re golden.

Achieve the second best time in the Killhouse

After meeting up with Grace and bringing her back, you’ll be able to complete the Killhouse challenge located just past the stairs down to the shooting range.

The time to beat is 1:29, which is fairly easy to get. After disabling the door you have to shoot all the lit targets and reach the end. Make sure you hit the timer at the end of the course (when you run down the shooting range).

You will get time added at the end if you miss target, but you can usually get away with missing two or three. 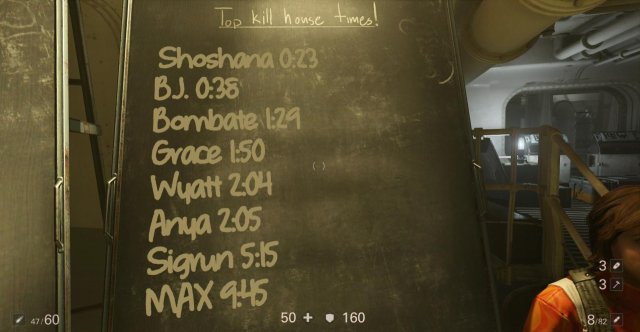 Unless you can beat 23 seconds, you want to be second on the scoreboard.

Perform a takedown while in the wheelchair

You play the first portion of the game in the wheelchair. Sneak up behind any enemy and hit the prompt to perform a takedown. You get ample opportunity, but it can technically be missed.

After your execution, you’ll be asked to pick one of three pieces of new gear. For this one, you need the Ramshackles.

After your execution, you’ll be asked to pick one of three pieces of new gear. For this one, you need the Constrictor Harness.

The Sky is the Limit

After your execution, you’ll be asked to pick one of three pieces of new gear. For this one, you need the Battle Walker.

Kill Hitler during the Aerostat Audition.

When you are asked to act out the fight sign during the audition, kick Hitler in the face instead.

They did Nazi that Coming

Stealth kill 10 enemies in a row

As suggested, you are not allowed to be seen between kills. As far as I know you can kill in any way as long as others do not see, possibly including shooting leaking oil out of sabotaged machines.

Throw a hatchet and kill an enemy from 30m.

It’s best to have at least 2 axes for this.
Find an enemy who is far away from you.
Try to hit him with first axe but if you miss don’t move a muscle.
He will most likely go to investigate the noise and when he stops throw another axe.

Taste of Your own Medicine

You can view your collectibles progress in the menu under EXTRAS. It will list how many of each collectible there are in each area throughout the game, as well as which district they’re in.

Find at least one of each collectible item

Find all of Max’s toys

As you progress you’ll come across weapon upgrade kits. Just use one on whichever weapon tickles your fancy.

Same deal as the previous, but for every weapon.

Perks are leveled up by performing specific actions a certain number of times, like getting 25 headshots. This must done a total of 5 times to max out the perk.

Read above, but for all perks.

You should get this through the course of the game. If you don’t you will have to farm them by replaying your favorite chapter.

Beat the Panzerhund ride without killing anyone on ‘Bring ’em On!’ difficulty or higher.

After meeting with Horton, he’ll send you on your way on a Panzerhund. This achievement is pretty literal in that you only can’t kill anyone while riding the Panzerhund, if you dismount it or it gets destroyed, you can still kill on foot without penalty.
The achievement will unlock when you drop into the water in the sewer.

Coming Back for More

Using the map on Evas Hammer, go to each district available.

After retrieving the dossier from Manhattan, you’ll have access to the Killboard at the helm of the U-boat. 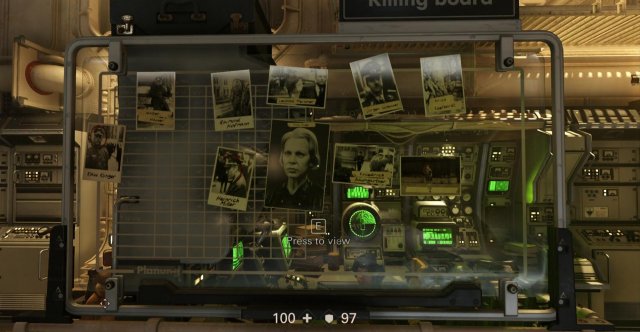 This lists all the Übercommanders that you have to find. You can access their locations by ‘spending’ enigma cards at the enigma machine, which is right next to the Killboard.

Contraptions are the upgrade you get when you get your new body. Upgrade contraptions by completing side quests on Evas Hammer.

After you get your new body, you’ll have access to the digital map. Use the map to select different districts, starting with Manhattan.

You’ll need to do this to access the locations of Übercommanders on the Killboard. You have to pick two halves of the pattern to match the one indicated.

After completing the mission in Section F, you can explore around the U-Boat a bit. Go up out of Set’s lab and find this entrance to Club Kreisau. 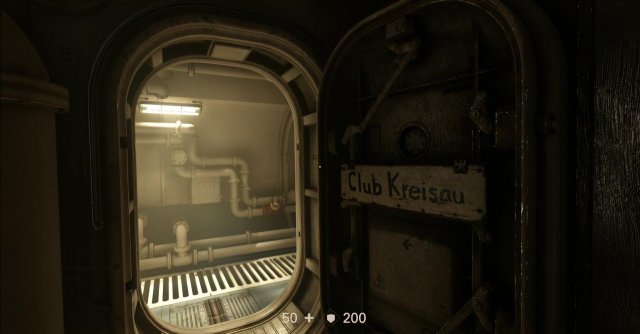 You’re looking for an arcade machine against the back wall of the club on which you can play all of the original Wolfenstein 3D. Oh, uh… I mean Wolfstone 3D. 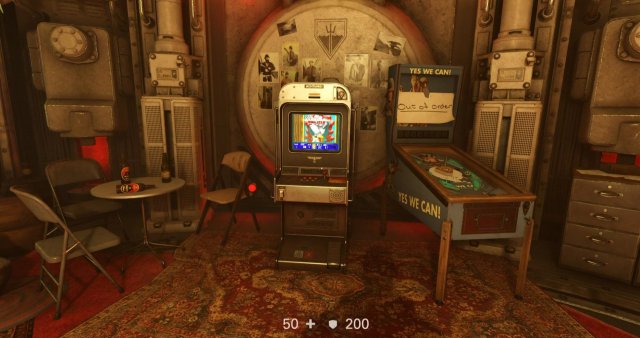 Finish a District without triggering an alarm

Much easier later in the game when you have access to enigma machine.
Manhattan Penthouse is quite easy as there are just few enemies and the level is small.

Wait for the game to resume after the credits

Complete all side missions

Guides for some of the most difficult battles in Wolfenstein II: The New Colossus for Mein Leben and I Am Death Incarnate. The two difficulty levels differ only in that […]

Wolfenstein II: The New Colossus – How to Enable Steam Overlay

Enable Steam Overlay Right click on Wolfenstein II: The New Colossus in your game library. Click ‘Properties’. Click ‘Launch Options…’ Copy and paste everything from inside the parantheses, do not […]