The basics of dungeon running and combat, and how to easily win the boss fight at the end of each level.

The hazardous ruins are located in the north east, in the collapsed wasteland(red circle). To access the collapsed wasteland walk up to the gate (black circle) and you will receive a quest, granting you access upon completion. But I recommend against dungeon running too early on. Whilst providing the player with higher droprates of many important items compared to the abandoned ruins, the stamina cost early on is much higher, and during the first month the player should be able to cover all material needs by mining in the abandoned ruins. 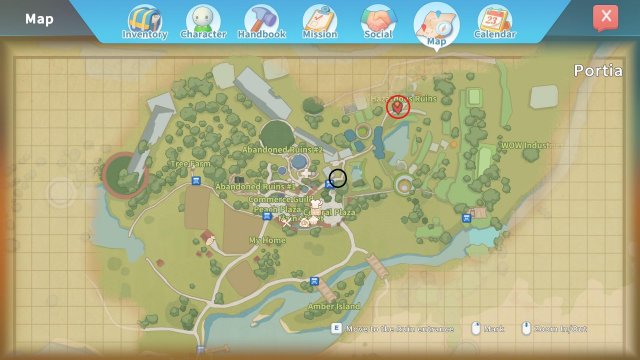 Currently there are 4 levels to choose from. Each level consists of 4-6 randomly generated stages consisting of a mix of combat and platforming. The last stage of each level is always a bossfight against the chemical dropout. 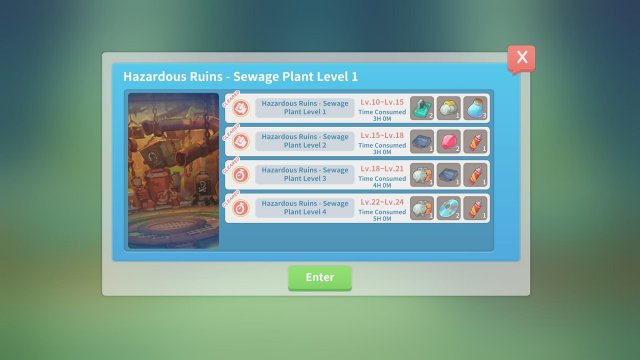 Your efficiency in combat is governed by your attack, defense, critical %, health and stamina.
A couple of useful things to know:

There are two actions to combat: Attacking and dodging. Attacking is straight forward enough, without one of the last battle skills each attack costs 1 stamina, even if the attack misses. So try to avoid spamming attacks or you’ll be wasing stamina.

But dodging is a bit trickier: The hitboxes of enemy attacks are rather generous(especially chemical dropout) and most enemies will retarget their melee attacks if you dodge to early. So it’s important to understand that dodging is not to get away from the attack, but to dodge through the attack. During the dodge roll the player is invulnerable to melee attacks, so it is all about timing. Roll to the side of your foe as he is attacking so you can instantly start to hit him again after the roll.

But against ranged attacks the dodge roll seems rather unreliable, so I recommend sprinting to the side of the enemy, since they simply shoot directly at the current position, instead of predicting the shot.

Caution: this tactic, whilst not an exploit still makes the boss battle rather easy. Finding a strategy against the boss yourself might be more rewarding…

The boss has 2 phases, the 2nd triggers when he’s at about half health.

During the first phase he uses 3 attacks: Swing(horizontal melee), Smash(vertical melee) and a shot of chemicals(ranged). If outside of melee range, sprint towards the boss at an angle, causing him to miss you with his ranged attack, then start attacking until he winds up his melee. As described above in the basics it’s crucial that you dodge through his attack, instead of away from it. Getting the timing right will take some trial and error, but you’ll get the hang of it. After dodging simply attack until the next melee windup.
Once the boss is down to about half health phase two starts. Even while attacking him at point blank range the boss will try to use his chemical gun. This can be dodged by a well timed roll to the side. But if the player is hit, he will be knocked back and then the boss uses his 4th attack, a continuous spray of chemicals that stuns and damages the player. But currently this spray is very easy to avoid, after being knocked back by the shot simply sprint or dodge roll towards the boss before the spray starts. The spray cannot hit the player in melee range of the boss, so the player can continue to attack the boss until he goes back to using his normal shot again. 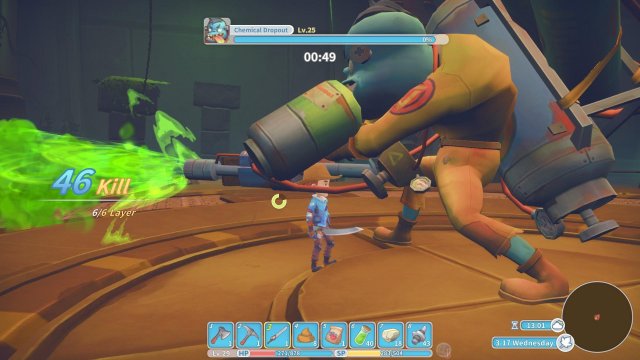 This tactics seems a bit cheap to me and makes the boss battle rather easy, so this might get patched…

My Time At Portia – Dodgy Guide to Dodging

So why did I make this you may ask. The answer is the developers decided, like many others, to include a dodge mechanic in their game. However, they never explain […]

My Time At Portia – How to Win Every Spar Match (Cheats)

What is Sparring? Sparring means “fighting with bare hands” in this game, basically. You fight the person you talked to. Sometimes it helps you unlock areas. Like in the Wastelands, […]

My Time At Portia – Gameplay Tips and Tricks

ContentsCharacterGolsWorkshopSocial Character Skills: Plan your skills wisely – read over them before allocating any points as you can only put 5 points per row and must pay 1000 gols for […]