This guide provides a full walkthrough of the game, together with an explanation on how to obtain the achievements.

Note that it contains images and information that could spoil your experience!

Nephise: Ascension is a pretty short (1h – 2h) and straight forward game with achievements that are naturally unlocked by following the story. Additionally, there are several missable achievements that you can get either during the first playthrough or later by repeating specific levels (you will need to finish the game first so that you unlock the chapter selection in the main menu). I advise doing the latter and enjoy the exploration during the first playthrough.

Considering that the guide contains heavy spoilers, I would recommend you checking it only if you are stuck or happen to miss something.

The initial area is a valley which has a round shape. On the outer edge there are several gates leading to various chapters of the game and in the center of the map you’ll find 4 pedestals that in the end will hold the statues collected in those levels.

Take your time to explore; at the opposite end from the starting point you will encounter a temple entrance; go down the stairs and pick up the statue. You will be granted the following achievement:

Go back outside of the temple and place the first statue on the first pedestal.

You will be granted the following achievement:

Place the statue on the pedestal to open the gate

Here is a video of all orbs locations from this chapter:

Ride the elevator up and down three times in order to get the following achievement:

Love in an elevator

Place the second statue on the pedestal.

From the entrance head towards the right. You’ll see some stairs; climb them and jump on the lion’s back. Enjoy the ride!

You will be granted the following achievement:

Ride on the back of a gigantic lion

The next area consists of a platforming sequence.
At the end of it, Nephise will cast a light spell and enter a room full of zombies.
You will need to make your way through the room towards the far right corner, in order to pick up the statue. Make sure to avoid any contact with the zombies, otherwise you will die.

If you manage to reach this room in under 400 seconds you will be granted the following achievement:

Let there be light!

Place the third statue on the pedestal.

Here is a video of all orbs locations from this chapter:

After you collect all the orbs, you will be granted the following achievement:

Unlock the vision of skeletons

Go up to the top floor, then turn right and down the corridor.
Enter the room behind the last door on your left and pick up the key.
Go back downstairs turn left on the corridor and enter the room there.
Position yourself so that the white shapes form a triangle. 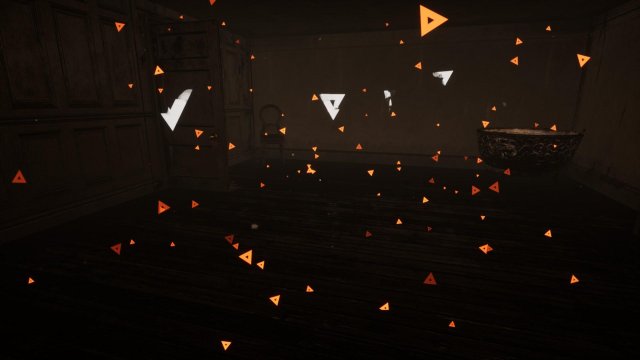 Don’t need no key to unlock this door

Solve the triangle puzzle and open a door

The door from the opposite corridor unlocks. Pick up the statue there.

Place the fourth statue on the pedestal.
Turn each of the statues so that they have the same orientation as the big statue from the decor. 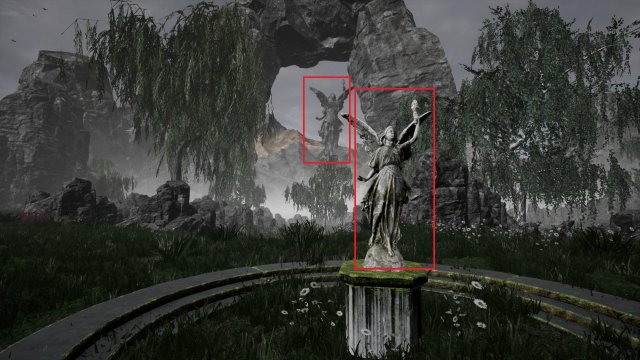 This is the way, step inside

Solve the statue puzzle and open the final gate

Light the 6 torches, avoiding to get touched by the zombies.
After the 6th torch is lit, a door will open on your right.
In the next stage, go towards the right side of the room and use the lever.
This will open an extra hidden room that contains another lever.
Use it and the undead champion will be defeated.

Even the odds with your sister, and return home

If you manage to do this section in under two minutes you will get: