This guide will hopefully help you not become cannon fodder in the first 2 minutes of gameplay and help new players understand and enjoy this little Gem.

Your browsing free games, looking for something fresh, and you stumble upon ZERO-K. It looks like Total Annihilation, it plays similar, yet it is a far cry from the original “TA” by Cavedog.

Total Annihilation was one of the first extremely successful and well known RTS games in the late 1990’s. Sadly due to a downturn in sales in the gaming industry, Cavedog closed their doors after releasing some additional content and one more game based on TA, but set in mythical times, with dragons and such. TA: Kingdoms

The game was so popular it remains to be played over and over to this day. And from it, the Spring engine was born, a fan-made engine. The engine has been developed for a long time by dedicated fans of TA and boasts much-improved pathfinding, better UI, and overall better graphics with a fully 3D environment with a free-form capable camera.

This engine is what Zero-K uses. Zero-K is a modification of the Spring Engine with custom units, sounds, animations, a campaign, and advanced non-cheating AI. Zero-K shares 0 code with the original TA and all the art is separate.

I have seen a few reviews in the review section for this game claiming Zero-K is a rip off of Total Annihilation. In fact, it is the opposite. It is a natural progression of the genre, based on TA, optimized and modernized to be able to work on modern computers with its own engine and art.

Okay, so now that you’ve either skipped my intro section or read it here is the core of this guide:

Either choose Skirmish or Multiplayer. At the beginning of a game you will have to pick a commander and a start location.

Choosing a commander:
Your Commander is very important. You must protect it at all costs. If you lose it, it’s going to be an uphill battle to win as it produces a good deal of metal and energy for you and allows you to store 500 of each. Take this into consideration when choosing.

After commander selection, you will be asked to select a starting location. In my opinion this is not a make or break decision, but, there are some obvious things: 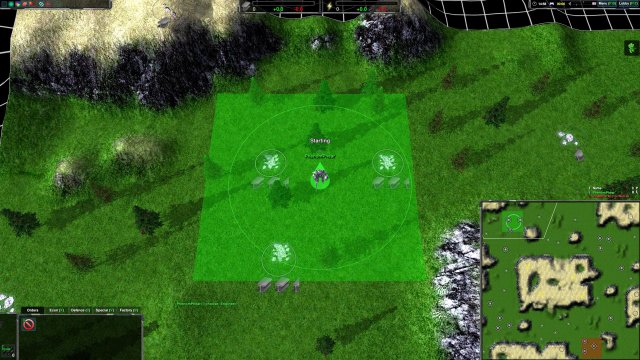 Once everyone is ready the game will immediately start and your commander will warp in.

The first thing that should be placed is your factory. Your first factory is free, warps in immediately, and can pump out 3 – 4 scout units and all with-in less than 60 seconds. (depending on factory choice)

The first 120 seconds of the game can set the pace for the rest of the match. Choose wisely.

As a factory costs 800 and your first is free, this is another important choice. Each factories units have their own advantages and disadvantages. Choosing a factory based on terrain and playstyle is a good way to get started.

I have not tried all the factories, but, of the ones I have tried I recommened Cloak Bots, Rovers, Airfield, or Tanks.

Cloak bots are a lot of fun, cheap, spam friendly and not much terrain get’s in their way. Downside is, well, cheap units die in hordes. They also generally lack overall range. If your all about sneaking around the main enemy force, attacking their extractors and energy plants, ambushing, and basicly sneaky style play then these are for you. You’ll want heavier units like tanks or striders to support these little gremlins in mid to late game.

Rovers are great, fairly cheap and fast. The downside is they have a difficult time in mountains or hills, and almost no viability in maps with large amounts of water. Also, bringing a car to a tank battle does not end well. It’s a great early choice on flat maps, but, you’ll want shield bots or tanks to support them as the game progresses. The heavier rover units are like bringing an APC to a tank fight, just not quite enough.

Tanks are well, tanks. This is another great beginner choice as your construction units are heavily armored and have lasers to defend themselves! They generally have a lot of hitpoints and great damage output. The huge downside is they are slow and can be out outmaneuvered by lighter faster units. You’ll want to plan for another factory pretty early once your economy is stable enough to flesh these brutes out as the enemy will quickly discover weak points and back routes to your economy buildings and factories. Rovers or Cloakbots do great with these, they can fill in the gaps with your main force and serve as rapid response teams to hold off the enemy while your tanks trudge over.

Airfield, in my opinion, is a more supportive choice rather than offensive. You’ll also need an air pad for bomber reloading. I don’t recommend these in 1v1 starting unless your experianced with them. In teamplay this a wonderful choice and your teammates will quickly thank you as your airforce saves their butt when they are under heavy opposition and getting rolled over. Be careful with the napalm bombers! It’s very easy to friendly fire your teammates forces if you just let them go ham on tight battlelines or friendly/enemy mixed enviroments. This goes for all the bombers really. Force fire is a good way to control bombing runs. You’ll want a ground based factory or Gunships to fill the flock. And don’t forget to build a pad so your bombers can reload! (otherwise they use the factory, and this gets messy). 1 pad should do early game.

I know thats a lot of reading and it sucks, but, I promise you, it will payoff in the end.

After you have placed your factory you can quickly place metal extractors by pressing W.

Don’t hold down the key as this confuses the UI and will cause you to have to reselect the area you want to build metal extractors in. (This goes for most hotkeys).

You’ll have a neat little metal extractor build icon in the center of your cursor. Just click and drag outwards near some metal deposits. (The grey scratchy metal looking patches). 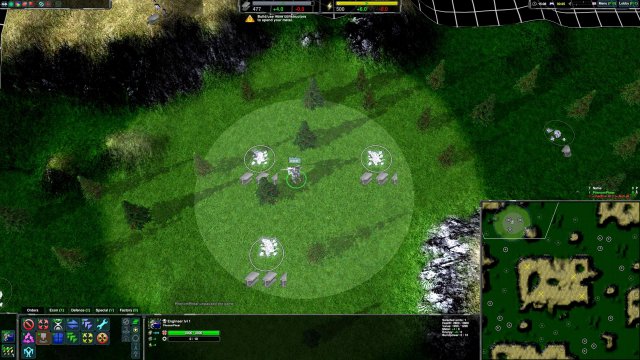 Once your circle selection is how you like it, let go of the mouse button and watch the automation begin.

An easy way to do this is to select the desired building, hold shift, click and drag out a line of them.

Solar is more expensive, but, in my opinion a better choice. If your going for an early rush though, go with wind.

It shouldn’t take more than 2 – 5 seconds to accomplish this if you use hotkeys and line building.

(If it takes you awhile to get all this going then I recommend starting a skirmish from the single player UI and selecting advanced in the battle lobby so you can add an inactive AI to the game, allowing you as much time as you need to practice and play around with hot keys, unit selection, building placement, and planning.)

Then build a caretaker from the economy tab next to your factory. These are immobile constructors that construct at 10/s and only cost 250 metal.

Now you can start producing your first units, and fast. Select a cheap unit like the Glaive if you did cloakbots, or the rover/air/tank equivalent.

It can be tempting to hold shift and spam 99+ on the queue, but, there is a much easier way. See image below.

The loop button. Just click that and your factory will spit out units until it dies, you stop it, or your economy stalls.

From here you can send out some units to scout and harass enemy constructors. You’ll also want to build a few extra constructors to send out and start claiming resources. Once you have a solid economy you can choose another factory to produce different types of units, but, you’ll have to pay the 800 metal in construction, unlike your first factory choice, which is free.

It’s usually best to max out unit construction in one factory before getting another. Factories do not build very fast on their own and need support from the commander, caretakers, or constructors to build units quickly.

It’s a good idea to place a Lotus in your base pretty early (under defenses tab). They are cheap and will keep early harassing units from severely debilitating you early in the game.

When you have a constructor or commander selected you can press E to mass reclaim entire battlefield and map sections. You’ll get a little purple recycle icon and be able to drag out a circle much like you did with the metal extractors.

After an intense battle where both forces retreat with what they have left (or nothing at all), send out a few constructors with whatever leftover forces you can muster to defend it and mass reclaim as much metal as possible. Keep in mind you will need storage space to store all this metal or it will be lost if it is not spent as quickly as you reclaim.

This is a risky tactic that can give you the edge you need against the enemy. The best unit for this job is the tank constructor or cloakbot with a mobile shield unit.

During a battle a lot of metal gets lumped up as units die. If your slowly losing and you can’t get more forces to the battlefield because your economy is struggling you can send out constructors to an active battlefield and start reclaiming as much metal as you can. Try to place them in the least active area, preferably behind your frontal units.

This is not always possible, so sometimes a constructor will have to place his life on the line for the good of the empire. Do your best to protect him, but if your losing, and you need to retreat. Leave him.

Another option is to quickly build a caretaker behind your units. This has two advantages. 1. Battle repairs. 2. Active reclaiming.

They die really fast if attacked at all, but, have decent range, so you should be able to plop one down at the back of the line. You can change it’s construction prioirty while it’s building to 1 so it gets every bit of resources as they come and help it build quickly. This more or less pauses everything else though. If you’re brave enough, and have an upgraded Engineer commander, you can pump out 2 – 3 of these at the back line in under 45 seconds. If you want repairs to be prioritized then play with the settings under orders tab.

A short guide on why you should expand and not porc in a corner. Economy Basics Zero-K has two resources – Metal and Energy. Metal is extracted from points scattered […]

Zero-K – Types of Units for The Basic Factories

From Raiders and Assaults to Striders, this guide should prepare you with the basic information for how to use unit types effectively in the early campaign and skirmish. Covers Cloakbot, […]