This a guide to the hardest achievement in this title, Fully Charged: Charge the largest battery to 900 or greater.
Only 0.18% of users have completed this achievement at time of writing and I didnt’ find it too difficult and wanted to share.

This achievement can only be achieved once you’ve completed the story and unlocked the 3rd and largest battery. You’ll know you have the right battery as it is the only battery with a counter on it. The counter starts at 000.

For each successful action, the counter will count by 1. The goal is to get the counter to 900 or higher.

Just like when charging the smaller batteries for the various missions, you have 3 “lives” to fail an action. The only way to fail is to take too long, setting something incorrectly does not count as a failure.

Interestingly, for the trophy on PlayStation, you only need to charge it to 100. Clearly, PC has superior gamers.

Is this Even Possible?

If you’re reading this guide, you’ve probably attempted it a few times, maybe even gotten up to 50 or 70 before looking for a guide.

Personally, I charged it to over 900 without getting a single fail. Here is a screenshot. Note, none of the fail indicators are lit… also my score is at 968. 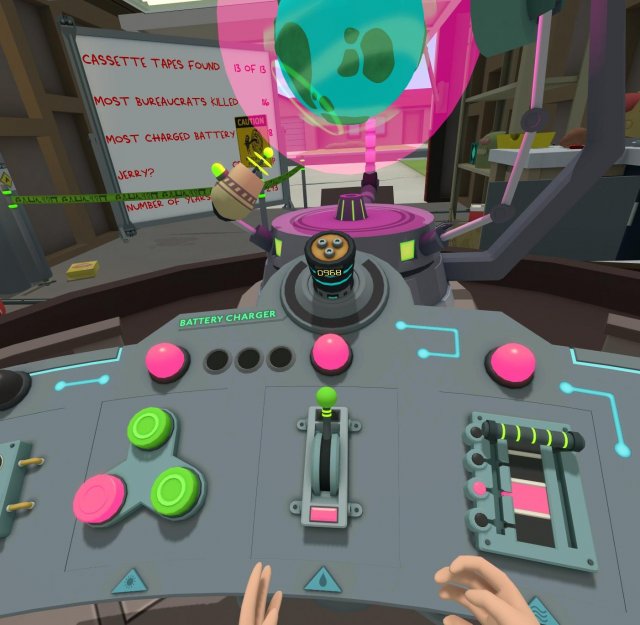 Before you Start: Setup

I’d recommend having room sized play and make sure your sensors have good coverage of your front when you’re in the battery station.

Don’t play seated, especially if there is a desk/surface in front of you. You’ll want to be able to move smoothly. Expect to play a few times to get used to the motions.

For your sanity, consider muting the game. I got this achievement with the sound muted. You may find the audio indicators helpful, but I find the incessant beeping annoying and stressful. I also believe playing without sound is superior for the strategy outlined here.

My recommended strategy is to start at one end and go to the other end, without regard to which specific puzzle lit up first.

For each of the 5 devices I first check:

Slow(ish) and steady wins the race. The easiest way to fail is by switching something to the wrong setting and getting flustered.

The first 5 or so lights are slow, then it is the normal speed after that. It does not speed up again.

When first attempting this I got a high score of 50, then 70 before giving up. A few days later when I tried again after thinking about this strategy, I immediately got a score in the 200s. Then a score in the 600s. Then I beat it. So I probably only attempted this 5 or 6 times before achieving it. So this strategy plus a little practice and you’ll get it too.

Rick and Morty doesn’t appear to pop achievements while in VR like some other titles, at least for me. It unlocked as expected after I let it fail out when I was safely over 900, but there was no in VR notification.

When charging the hardest battery, the puzzles will always be in the same order, and there will always be 5. Smaller batters have fewer puzzles that are in a different order.

I find the hardest puzzle is the twist puzzle (far right position). Especially when it needs to move two positions clockwise or counterclockwise.

The I find the next hardest the plug puzzle (far left position). I find it is relatively easy to miss which one you’re going for. Do note there is some grace for it to snap into position.

The 3rd hardest puzzle for me is the lever with multiple positions (in the middle-right).

The last two puzzles are easy, the simple lever (in the middle) because if it is lit you simply switch the position and can’t as easily over or undershoot. Lastly, the 3 buttons puzzle is the easiest and doesn’t require grabbing, simply moving your hand will activate. I found I could often include a 2nd pass at the 3 button puzzle if it happened to be active when rotating back from far left to far right to speed up point gain.