A quick and simple guide on how to clear Marko’s solo game.

At the start of the game, you might think of playing it safe, since you only have 1 character. However, you should instead be aggressive. This will be the longest section of the guide, as everything detailed here will be the overall strategy for most of the game.

For the first day, go through all the loot pile, but DO NOT PICK UP ANYTHING. Simply take enough materials and parts to craft a Metal Workshop and Shovel (14 components; 12 wood). Dig your way through the rubble pile as quickly as you can. Again, DO NOT PICK UP ANYTHING but try to keep track of what you have and where they are. If you have the time, make a crowbar and open all the locked doors and cabinets.

From here on out, your focus is to only gather enough materials to build. Supplement whatever you gathered with whatever material is left in your shelter. Make sure that at the end of the day, you have built as much as you can and have used as much materials as possible. The following is what you need to have built before the start of “Outbreak of Crime”.

It may seem like a tall order, but if you focus on the right scavenging locations, it is actually very passable to do.

After scavenging at night, Marko will return to the shelter tired. But do not sleep first. Instead, quickly start the construction of anything you need to build. You can leave these construction unfinished, as any materials used in constructions will not be stolen on raid. If you crafting any items leave them unfinished until you need to use them.

Sleep before noon. After waking up, use whatever remaining time you have of the day to finished building. Only finish crafting if you need to use whatever item on the next scavenge. Rinse and repeat every day.

Some people say that you should keep a “Stash” of items outside when scavenging so that you don’t get looted. However, a stash makes it difficult to manage materials, and costs extra days to move things to-and-fro, and also hinders backpack space.

Instead, keep track of the materials needed for the list above and only gather what is needed to make them. You have about 10 days and 10 things check-off. Just focusing on at least 1 a day will see you to the next event.

When scavenging, there are 3 things that you should look for. These 3 things once you have them, should be taken with you every night while scavenging to keep them from being raided. Everything else can be stolen without affecting your survivability much.

To get the gun, target places with events where killing soldiers is a positive and won’t incur emotional penalty. Marko is a fairly strong fighter, and after a backstab, can take on most enemies. Equip him with a knife the first time you find a place (Airport, Construction Site etc). They usually have 2-3 enemies and are loaded with materials. Clearing just 1 of these locations will almost guarantee you enough materials and equipments to last until day 10.

You will only need to eat once every other day (3,5,7, etc). So only scavenge for food before those days (2,4,6, etc). If you have more than 1 raw meat, cook ALL of them at the same time. Food left on the stove can be eaten later and cannot be stolen during raids. If you have food in rat traps, keep them in the trap until you are ready to cook. Once you are, cook them in the whole batch.

Rinse and repeat this process, and you should reach the next event easily.

From what I read on the forums, this is the part where most people fail to survive. With all the constant raiding, how do you go out and scavenge. The answer? You don’t. For the most part, you will simply stay in your shelter.

Most forums I’ve read said staying in the shelter is dangerous. But if you’ve done everything as I’ve said so far and crafted the minimum, you should have no problems. The Reinforced Door is the key, as it is the difference between being able to fend off attackers or not.

With a gun, 20 bullets, and a reinforced door, Marko will have no problem repelling any raiders if put on guard duty for the duration of the outbreak.

The ONLY time you should leave your shelter to scavenge is when you have run out of materials to make fuel and filters for water so as to minimise what can be stolen. You should also scavenge if you run out of bullets to prevent getting injured.

Guarding against the raids should be the only time in the game where injury is possible. You should still have your starting medical supplies in the loot piles and that should be more than enough to last you.

Rinse and repeat until next event.

Winter can come before the end of the outbreak. When this happen, take it as a blessing.

Raids seems to be left often in winter. Extreme winter cold will have no raids, and you should take this chance to scavenge and restock as much as possible. You can listen the radio for when the weather is too cold for raids.

As much as you can, do not stay in the shelter. If you do, only add fuel to the improved heater at the end of the day to save resources and prevent getting sick. Use the fuels you got from chopping up the starting furnitures.

Like with raids, this should be the only time you can get sick under poorly managed circumstances. Same with before, you should have enough medication to get through the sickness from your starting loot pile.

There are next to no raids during this period and you should take this opportunity to restock as much as possible. This is the only time in a solo run where you can safely go out and scavenge and keep stocks of materials within the shelter.

Use this opportunity to build and upgrade things that you can’t otherwise do with 1 day’s worth of scavenged materials. I suggest the upgrading a herb garden to a vegetable garden.

Now, you simply have to wait until the end of the game. Rinse and repeat the strategy from the beginning. Your rat traps should provide more than enough food for just Marko to survive. Again, cook in batches, and stay out of the shelter whenever you can. That’s it! Congratulations, you survived the war!

If you’ve played the rest of the game, you should know how the trader works. There’s no real strategy here aside from trading things you don’t need for things you need. In Marko’s scenario, you’ll most likely be trading extra guns and other high value items for components and water.

Sometimes during the game, you might be joined by another character after 13+ days. If you have the reinforced door, this should not be a problem as you will be able to repel any invaders as long as they are passable at guarding. In fact, this will make things a lot easier, as you can scavenge and guard at the same time.

I got Cveta on day 21, two days before the curb on crime during the dead of winter, and she guarded the worst of the raids with no problems. At that point in time, I had 10 cooked food on the stove, so even without her, Marko would have survived no problem. But with someone guarding, you can start stockpiling resources at your shelter, making your life that much easier.

You might be worried about having to feed 2 mouths suddenly, but with a properly guarded shelter, you should have more than enough food left over at scavenging sites to replenish for the last few days.

As proof, this is a screenshot of my group at the end of the war. Note the amount of food on the stove, which was how I kept my food from being raided. I also had everything built accept the alcohol distiller. 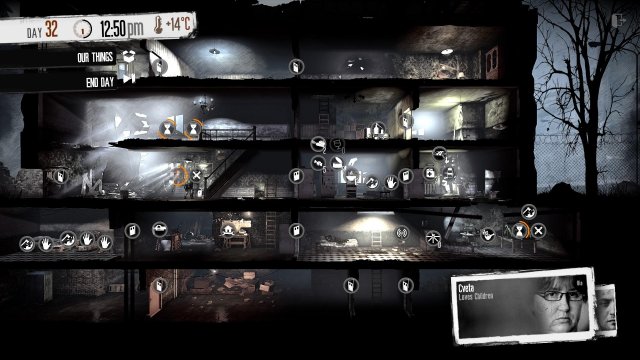 This War Of Mine – Tips and Tricks for Getting Started

Before you play the This War Of Mine game, you will definitely want to know these simple but useful tips and tricks. If you have any tips feel free to […]

This War of Mine – 100% Achievement Guide (The Last Broadcast DLC)