Every RPG is a bit different. This guide describes the conventions in the Tower of Time.

The Tower of Time has some conventions that are a bit different than most RPGs. Best to know them before you find out the hard way! So sit right back and let me set you straight. 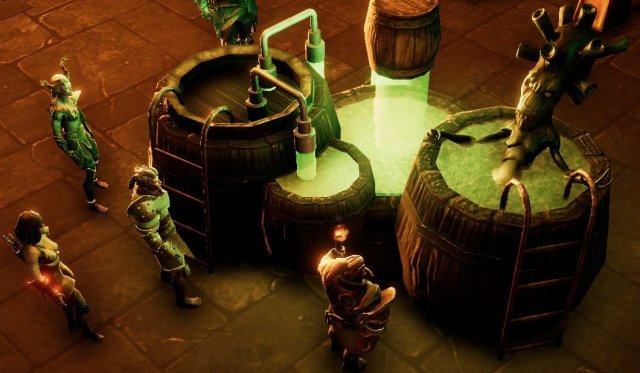 Might adds to weapon damage, speed makes your attacks (and movement) go faster, mastery adds to the effect of skills, and life gives the character more hit points. Simple enough. What’s different is that this is true for all character classes. If you want your archer to do more damage with arrows, add to her might. If you want your druid’s wand to hit harder, add to his might!

Armor protects against physical damage on a point for point basis. If you have 30 armor and get hit for 50 damage then you just take 20 points of damage. If an enemy has a lot of armor and you hit it with a bunch of small attacks, you aren’t going to do much damage. You’re better off using big weapons that can punch through the armor and still do damage.

Many weapons and some other items have an armor penetration stat. That just means the weapon automatically penetrates that number of armor points. Unless your enemy has very little armor (i.e. there’s no armor to penetrate), it’s the same as adding damage to your physical attack.

While armor works on points, elemental powers work on percentages. If you hit an enemy with a 50 point fire attack and that enemy has 50% resistance then you’ll only do 25 points of damage. If it has a -50%, though, you’ll do 75 damage!

Elemental penetration subtracts a percentage from the enemy’s resistance. If you hit the enemy with a 50 point fire attack, that enemy has 50% resistance to fire, but you’ve got 10% penetration then you’ll do 60% of 50 points of damage, so 30 points.

So, does everybody remember that whole distributive thing from their math classes? Time to put it to use! If the enemy has 50% resistance to your attack and you hit it with 5 attacks doing 20pts each, you will do 10+10+10+10+10 damage for a total of 50pts. If you hit it with one attack doing 100pts it will still do 50pts. If these had been pysical attacks against 50 armor, the five attacks would do 0+0+0+0+0 damage for a total of dink while the 100pt attack would do 100 – 50 = 50pts of damage. Breaking up elemental attacks into multiple attacks doesn’t really matter but it sure does with armor.

Gold: Used for raising levels. It’s also used for upgrading the buildings. You can not use gold to buy items or sell items for cash! Essentially, gold acts like experience points in other games. 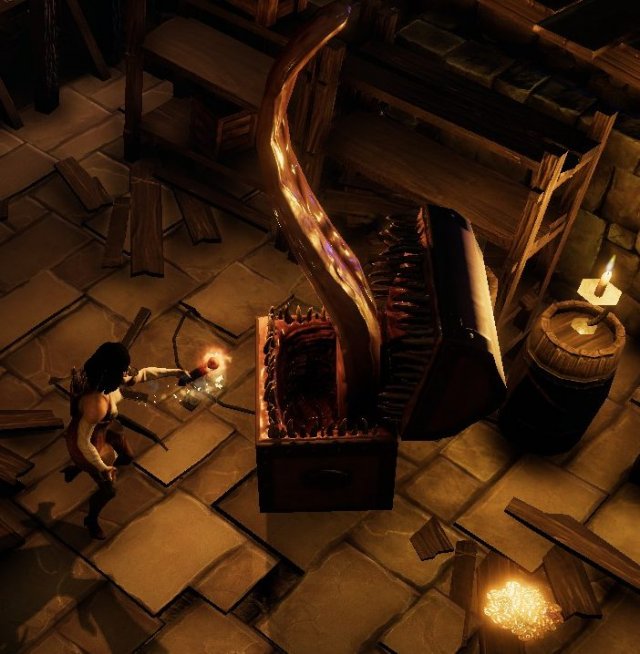 Crystals: These are the currency of items. When you get the blacksmith going and upgraded you can use crystals to create new, random items, or enhance your existing items. You can also combine 3 green crystals into one blue or 3 blues into one purple once the transmute option opens up. You can also destroy items you no longer want for crystals.

Loot: Magic weapons and armor. Between battles and chests, you’ll get plenty of these! Your inventory appears to be pretty huge but don’t hang on to items you’re pretty sure you won’t use. Magic (green) items are typically the weakest, ancient (blue) items are a bit stronger, then relic (purple) items, and finally legendary (yellow) items. Items also have a level, which you can see as roman numerals in the lower right corner of the item’s icon in your inventory. Don’t be lazy, though! That purple helmet might have more power than the green one you’re wearing but your green may be adding something you really need while the purple has strengths that don’t help you.

You can also use crystals to make completely new items. I haven’t used it much but it will make a new, random item for you. You get to pick the type of item, the level, and whether it’s magic, ancient, or relic. The rest is a roll of the dice.

The item forge is another way to enhance your stuff. If you look at the details of your item, there should be at least one square in the upper left. Those are slots for the item forge to work with. Once the item forge opens up, you can use it to enhance the item as many times as there are slots. The first enhancement just costs green crystals, the next blue, and after that it costs purples. The more powerful an item is, the fewer slots it will typically have.

Forges also exist within the tower. These can increase the power of one of your items. If you improve a blue (ancient) item, it will turn into a relic and you’ll be able to enchant it. The item retains all of its item forge slots, too, and may even gain one.

There are lots of special rewards, too. Magic scrolls in the tower will let you permanently add to your characters’ statistics, though the biggest ones will typically take something away as well. Fountains will permanently add or subtract statistics as well. Be sure to inspect the fountain – if it looks nasty then it probably will subtract!

As you buy levels in the barracks, you’ll gain points for skills and attributes. When you add to attributes, be sure to click the apply button! (If you forget, there will be a number in the lower left of your character’s portrait.)

Attributes can be changed but it will cost you some crystals. You’re free to change your skills at any time, though – even in the tower! When you go up against a boss, you can switch Maeve’s fire arrows from bigger explosion radius to higher critical hit chance, then swap it back after the battle is over. If you’re up against enemies that resist air damage, you can not only swap her out her arrow barrage for a different skill, you can also take all the points invested in arrow barrage and put them into that other skill!

Note that most encounters let you look over the enemy stats in detail then withdraw. That lets you change your party, skills, and items around for that specific battle. Most levels stick with just a few enemy types so, once you get set up for those enemies, you’ll be good for the next several battles. You’re not going to have to swap everything around every time you fight.

You can return to any level in the tower. You don’t need to complete everything on a level before going down the stairs. Some enemies are pretty difficult and will require that you come back later.

All characters can wield two weapons. Doing so lets you take advantage of the bonuses on both weapons, though the left hand’s weapon will do half damage.

Only fighters can use shields and only on the left hand. Mages with shields, while Original, would be a Sin against RPG standards!

Tower of Time – How to Beat Mimic Chest

Strategy to beat Mimic chest. How to Beat Mimic Chest You have three people in your party. Level all your characters to lvl 3.  Warrior skill: Stone war (left column), […]