Here you will have a general view about the essential mechanics of Azusa, an explained first contact, to safely develop your character with no doubts or regrets. Read carefully every bit of this guide, it is important and extensive.

This section is very interesting and self-explained, its here that everything begins because its the first step to give start to a new life, to someone that will live in Azusa’s universe where all the magic happens. You will face a lot of info, but relax, with attention and care everything will be ok. Here we have the sections “appearance”, “status” and “personality”

In “Appearance”, you will be able to customize how your character will look like visually, however, choose the race first, its important to not restart the whole process. After having chosen your race, you will be free to choose the hair and colors, the gender and clothes you will wear. It’s important to note that below your character there is a button with an arrow icon that’s responsible for that character’s skin color.

In “status”, choose wisely, for you will only have 10 starting points to distribute between the different atributes, which will be chosen in this article’s next part. The chosen talents will determine your gains while you play and progresses. Each time you manage to play a Next Generation, you will accumulate 2 more points to distribute.

In Personality, you will give your character an identity, and that part is very important because it will affect a lot as the games progresses. In this part you will choose how you will be called, which will also determine your first impression, which is useful because it reflects how others will see you: 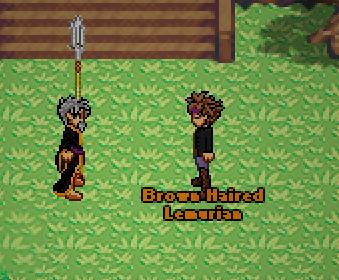 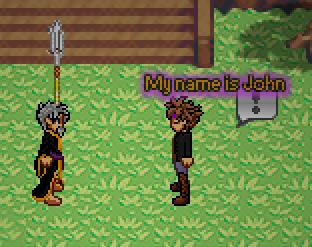 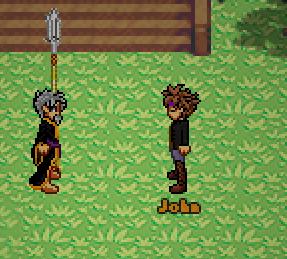 Then, the age: You can start as a kid, teenager or as an adult. The age affects a bit the hidden potential inside everyone, an adult is usually stronger than a child, however, a cihld haves a bigger growing potential and can actually surpass a common adult’s potential. This part also chooses where you want to start, pay attention to this for the locomotion to another places is rather complex. This session also chooses the class that will define some of your talents in-game, and depending on your race, different classes may appear. Talking about the God’s choice, have in mind it refers to the God that will protect your character, but that doesn’t stop you from being a believer. The first personality is the description of who you are, so you can write at will about your character.

You can see the command list and its macros at the top of your screen, and you will also be able to edit and customize them any way you wish by selecting the “Hotkeys” button. Its pretty simple, after selecting the option you will answer the following questions: which key you want to assign the command and which command you want to assign the key: Train, e.g., you can use other commands like “Who” or “Rules”, always separating the names with “-” instead of space, like “Admin Help”, you will need to type “Admin-Help” in the second box. You can put this hub command as a hotkey with this trick. 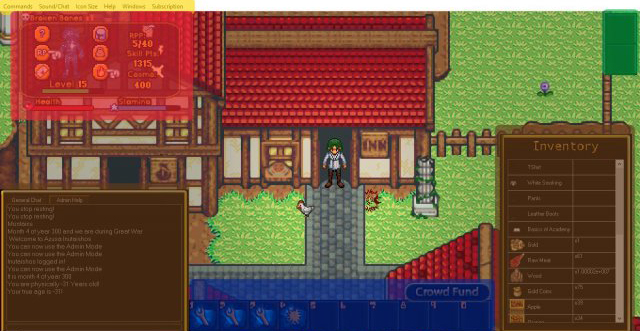 Having a colored hub as a guide, we can categorize in a few ways how the yellow part deals with external comands as follows:

In brown he have the inventory, where it can be overlayed to the building window in case you’re a builder, and the chat box, where all the messages are sent: 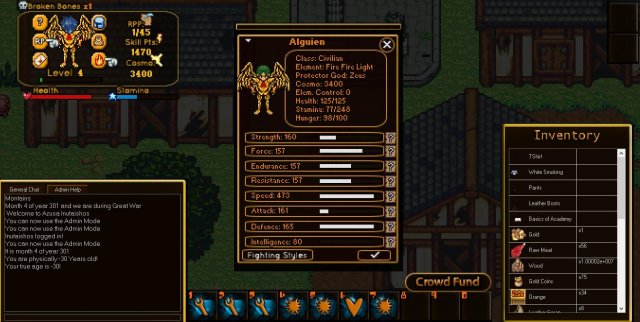 To progress in Azusa you must understand the importance of eating and nutrition, in your status window you will be able to see your physical atributes: Health, Stamina, Strength(Str), Force(Frc), Endurance(End), Resistance(Res) and Speed. When you use a training method, these values will increase, but for that to happen you must be well fed and properly nourished, each different food haves its own nutrition value. The nutrition is unique for all your atributes, so when you use a training method that works three atributes at that moment, the nutrition of your other atributes will also be consumed, even if they aren’t being stimulated. You can check your nutrition value clicking at the question marks next to each status.

Its important to remember that feeding of a single type of food only will decrease the quantity of nutrients that the body will be able to absorb, so, its recommended that you change your diet regularly to have better nutrition and vigor gains. Vigor is a hidden atribute that defines how much your character will regenerate health when resting outside of a bed. When you don’t be able to have an effective rest anymore, you will receive a message informing your low vigor.

Attacking and Deffeding are the called hability status, basically they represent your fight capacity, how well can you fight, so they don’t have nutrients. 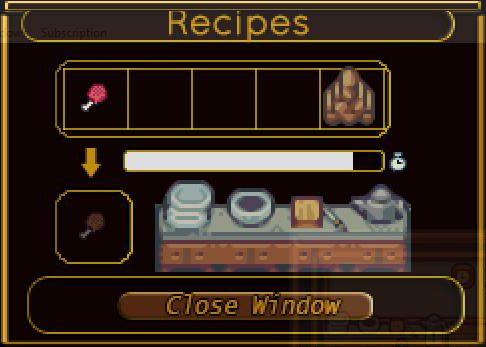 To get resources is very simple, but what to do with them requires some attention. Most of the things being offred in Azusa’s world can be an useful resource in a recipe, all you need to do is shake a tree, mine, kill a chicken, pig or another animal, trade with another player or an npc that you will be able to get them, there’s thousands of ways. All of they are by combat interactions (Z key), normal interactions (Say : S key or Roleplay: B key) or by the interaction hotkey (E)

Having the necessary resources, the recipes become useful. With them, you will learn to do some food in the kitchen to become strong or another tool in the forge to help your survivel. To learn simple receipts it isn’t need a high level of knowledge, however, for more complex food or itens, it will be needed a quite high level of knowledge.

Getting Stronger and Training Methods

Your first possible training will be the 1v1 basics, but be careful, because if you don’t have a training stance you or your partner will end up with broken bones, to learn a training stance, all you have to do is buy it in the Skill Points menu. Through the RPP shopping, you will also be able to acquire your first training, it will be random, but will be useful. With the game’s progression, it will be possible to learn other training methods, wathever they are, from more experienced players. By interacting with everyone, you will be able to learn several training methods to practice your atributes and become even stronger.

Puching a punch bag is also an effective training method that helps a lot at the beginning.
But first, you will progress in the game and become stronger by leveling up where you will guarantee enough to survive, by leveling up, the atributes that has been chosen as talents in the character creation screen will progress further than the others, and most importantly, Health and Stamina increase too, allowing better combat experiences.

The training methods are different to each other, working both the physical and menthal parts of your character. Whenever you learn a new training menthod, you’re able to teach it to another person, but keep in mind that it should also be developed, through a valid roleplay, otherwise there shall be problems with the lack of Roleplay breaking rules. The methods are organized in four categories, some of them have masteries that affects the category, and that mastery can be increased while you use those methods. 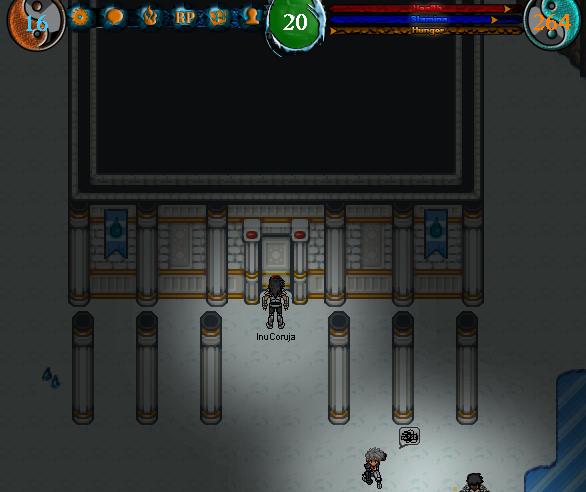 WIth the objective of becoming a Guardian, brave young men travel the world looking for the tournament arentas. Azusa’s world haves 5 of them:

The tournaments happen around 3 IC months, which is around 3 hours. People from around the world are able to fight for this armor, which can generate an easy or hard dispute, depending on how much you prepared for that challenge. After beating those oponents and winning the final battle, an elemental armor will be drawn and delivered to your character, acting as secondary cosmo.

The Olimpic Guardians originally had the duty to protect the criation. However, the Great Wars started and so the armors started to be used as defensive forces of each god. The Underworld Army have simular armors, but they are called Reapers and since then fight against the Guardians to decide Azusa’s destiny. 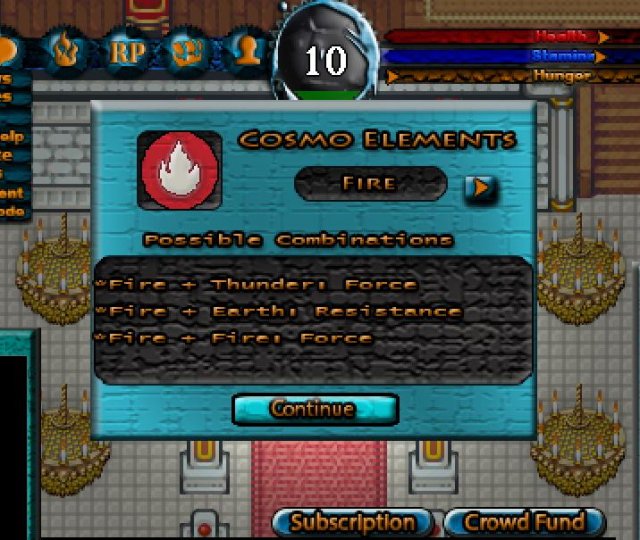 As you progress, there’s a time that your cosmo-energy will earn an elemental afinity, on level five or higher, only having at first these elemental options: Fire, Air, Earth, Thunder and Water. These options have combinations that will give you extra habilities when you reach level twenty, which will only happen after you receive the secondary cosmo after earning an armor.

Be aware that, if you receive too much EXP and level up too much times in a row beyond level five, wait the leveling up to finish to get your elemental afinity, since the window usually pops up again while you’re leveling up and this might end up in an undesirable choice.

*Fire + Thunder = Force = Fire Storm, creates 5 rays that randomly fall around the caster, burning where it hits; if someone is hit, damages they

*Fire + Earth = Resistance = Meltdown, generates a lavafield around the caster, with a great chance of burning who walks over that area.

*Fire + Fire = Force = Burnout: Creates a flaming line three tiles ahead, doesn’t burn the terrain, but there’s a great chance of burning the target; less chance against targets with water afinity with big Res or Frc.

*Water + Wind = Speed = Hurricane; creates some tornados that are randomly placed nearby, immobile, pulling people around to its center, causing some damage per turn.

*Water + Water = Def = Geyser; generates water from the ground and strikes in a straight line four times, once per tile, and once it hits someone, sends the target to the next tile, the effect repeats itself until the target is out of reach.

*Earth + Earth = Endurance = Earthquake; creates a crater that pulls targets in range of 4 tiles nearby closer, dealing damage, the closer the target, higher the damage.

*Thunder + Thunder = Resistance = Thunder Wave; creates an energy wave around the caster that strike the targets, damaging them; may paralyze them.

The combinations doesn’t need to be exactly in this order, only having the combining elements in your own cosmo and armor elemental afinity, which acts as secondary, is enough to learn the skill when you reach level twenty or higher. 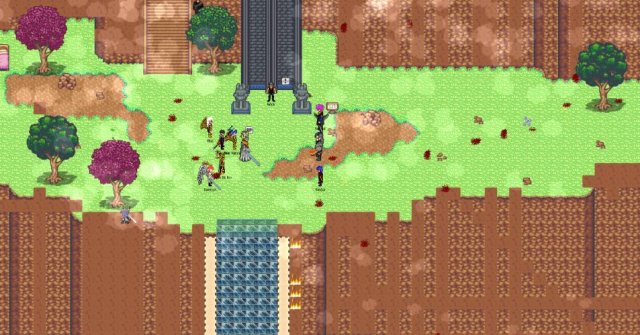 The Great Wars usually happen every 150 years, that’s when the armors are revived, leaving their state of grief, and when a new line of vessels can be born so the gods may return to the earth in their human or spiritual forms.

The Death Lord rules the underworld and forces dead humans to wear the hell armors, making them Reapers, completeling removing their good side to become demonic puppets.

If you die, you may end up becoming a Reaper and will start to fight for the evil, showing all the bad side of your personality, coming back to kill those once you called friends; or you can refuse to do that and wait for you friend to rescure you while continually suffer in one of the jails. 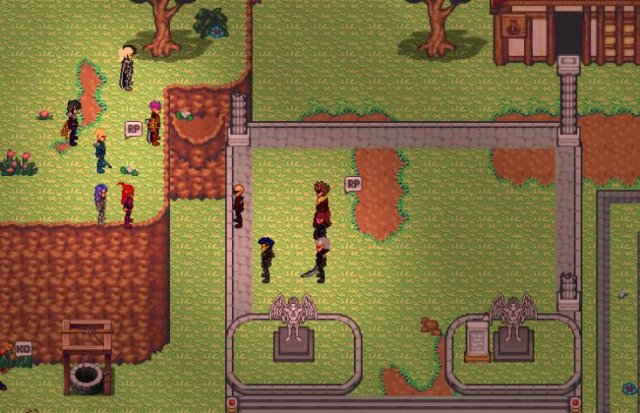 When a war ends with the good side winning, Earth receives 150 years of peace, and that period is called “Azusa”; when the evil side wins, Earth becomes condemned for 150 years, since no one can kill the underworld army, since they’re already dead and won’t die of old age. They end up becoming Earth’s rulers at the start of the next war.