Geek secret of Sacred Yards level stayed undiscovered for 14 years, but not anymore. Want to feel like pro speedrunner? Try this out! Instead of fighting more monsters Sam will fight… no one tbh…
Big kudos go to SolaisYosei for figuring this out.

What is Geek Secret?

Basically it’s a secret that was never listed as one. This is one of the reasons why no one ever could find it (aside from being cryptic as hell). You can skip the entire level without fighting a single monster, which is ironic because the achievement you get for finding Sacred Yards is “Yes, I’d like to kill more monsters”.

This skip stayed dormant for 14 years up till SolaisYosei made a video walkthrough on it.

What you need to know about this trick is that you gotta go fast. Otherwise enemies will spawn as normal so just Don’t stop! Make sure that you’re going in steady pace.

Start off by quickly rotating right and picking up the pill. Do that as soon as you spawn in the level. 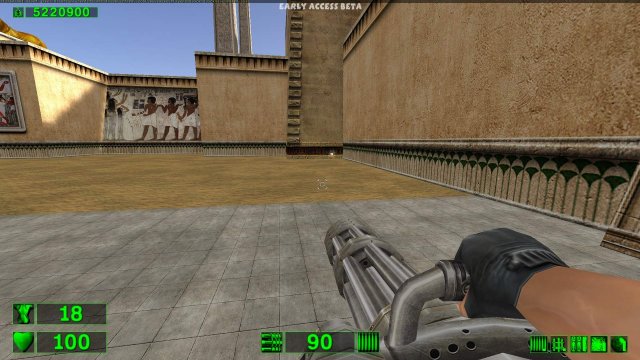 If done correctly you should be notified with following message.

Next, head straight to the fountain area and shoot the following tree with a rocket launcher. 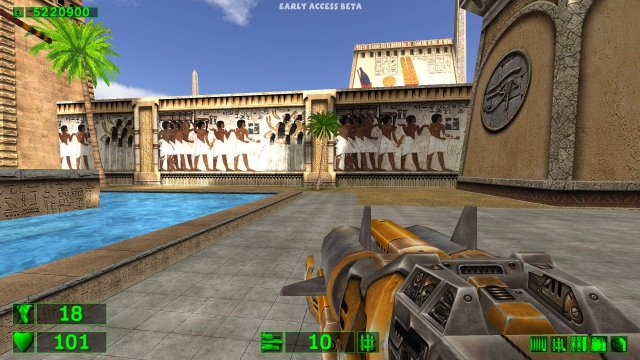 At this moment another pill should spawn around the corner, as shown: 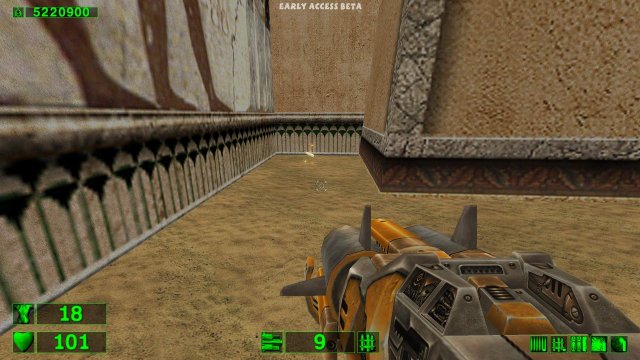 You should hear an explosion-like sound if everything up to this point was done correctly.
Turn around and shoot the statue. 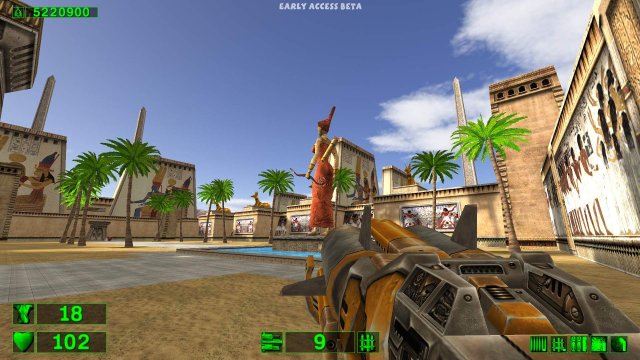 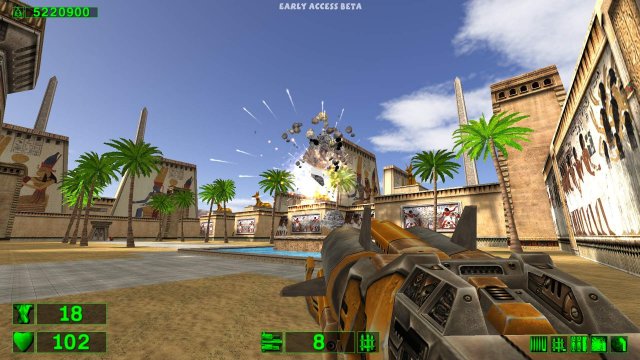 Enter through the door that just opened while picking up the pill and go straight to the next door that lead outside. 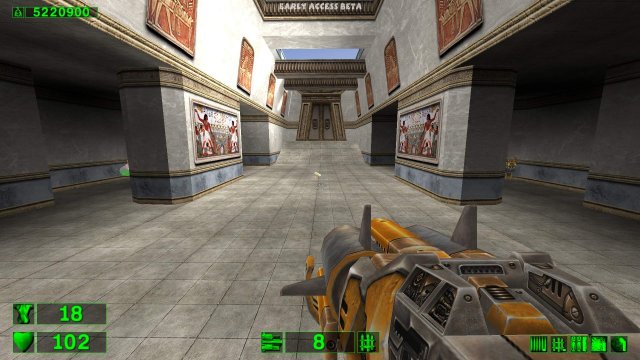 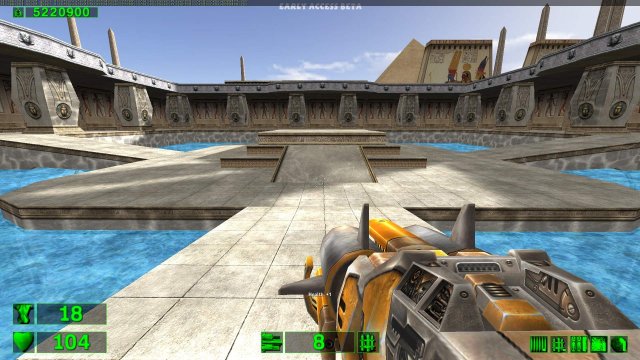 Go straight to the center of the area (it’s right in front of you), and jump on the newly created bouncing pad (“Bouncer lifted!” message should pop up).

You should be teleported to the whole new area. Shoot another statue 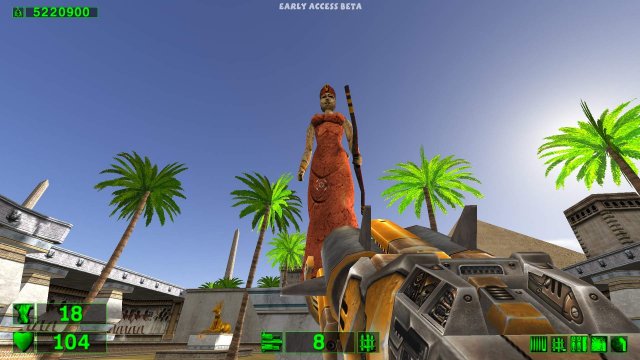 Big doors should now open before you. 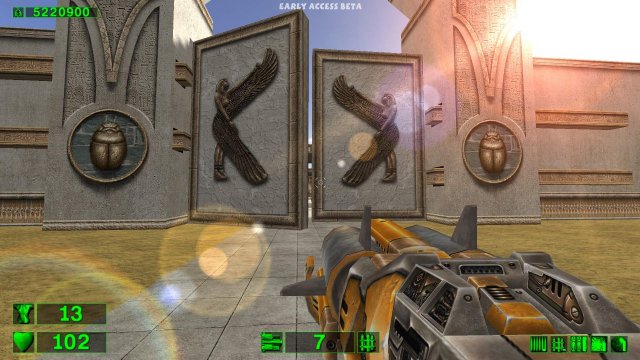 Enter the new area and immediately turn to the left, and pick up another health pill. 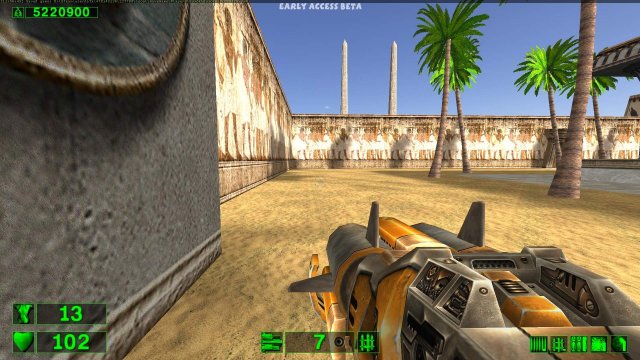 Turn immediately to the right and enter the door to your left. Get ready because you have to shoot the moving panel in front of you before it closes completely, otherwise the run will end! 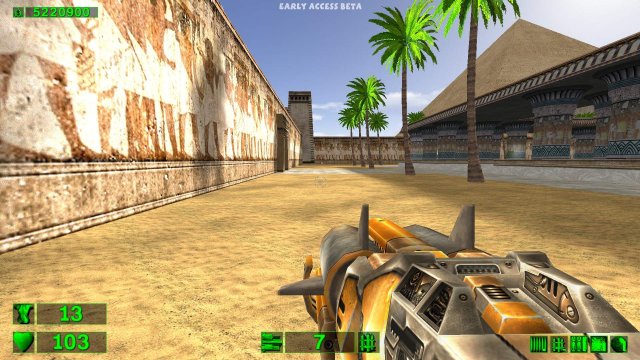 Pick up the golden Sphinx statue that dropped from the wall you just shot and come out the way you came in. Go straight near the big Sphinx statue and to another door in front of you. 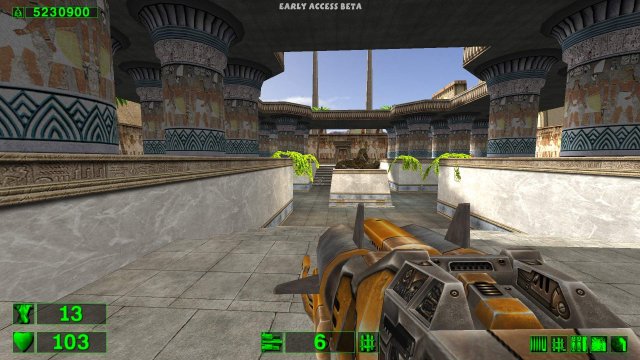 This one is quite tricky. You basically have to pick up the Red Ammo bag, but magically it’ll run away to your left. Approach the bag diagonally, and if you were quick enough no enemies should spawn. Otherwise you will be trapped and welcomed by Major Bio-mechanoid. 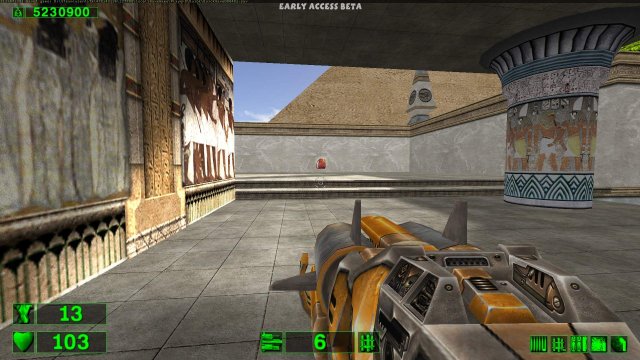 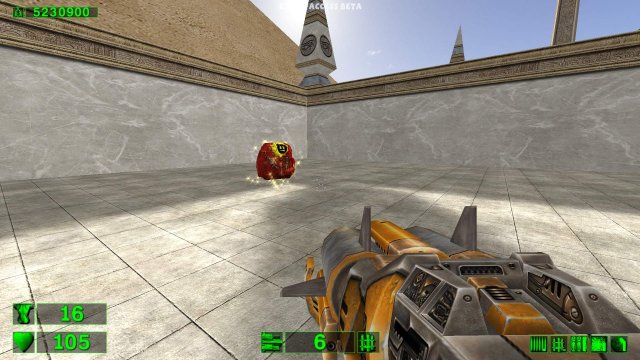 Turn around and move to the platform in the center of the room. head straight to the switch on the other side of said platform, DON’T PRESS IT, jump on it instead, jump again and you should find yourself at the balcony where second golden statue rests. Return to the room where “the” big Sphinx statue is. A cutscene should play and you’ll be transported to Great Pyramid! Congratulations! You skipped the entire level and didnt even encounter a single enemy!

This is a simple and complete guide about how to enable all in-game cheats with also in-game commands console. You won’t need to download and install anything. Intro Enable cheats […]