Today we focus on investigating all the methods of making power and compare how they work. 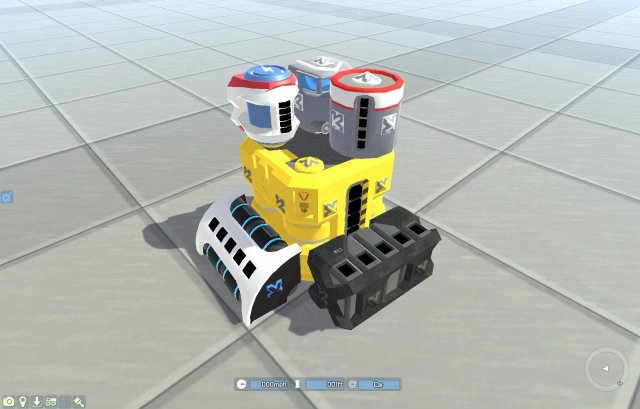 Each of the five currently available corperations has a battery, how much can they store? and how tough are they?

Here are some reference numbers, from each corperations 1×1 blocks, a burst gun was used to determine the health as it deals a rounded number worth of damage, and very low damage at that.

To summarise batteries, the Geocorp battery offers the best value for money and most efficient in terms of capacity to space ratios, they are substantially more fragile than other batteries and will chain self-destruct the easiest.

The Hawkeye battery is the most durable battery per block BY FAR and will be a great choice if batteries are not significantly shielded in a combat tech, they are however the most expensive batteries

The GSO battery is very good as a middle ground between Hawkeye and Geocorp, being more durable than Geocorp and cheaper than Hawkeye.

The venture battery has no outstanding qualities and is outperformed in every regard by the identically sized GSO battery, with its only advantages being fractionally less self destruct damage and a tiny reduction in weight.

The worst battery, most unexpectedly is the better future battery, less durable than GSO, more expensive than it per capacity and having inferior hook points the identically sized Hawkeye battery. As a potential point of interest, i did expect the better future battery to be the superior choice of capacity to space ratio as this is a feature found in its solar panels. 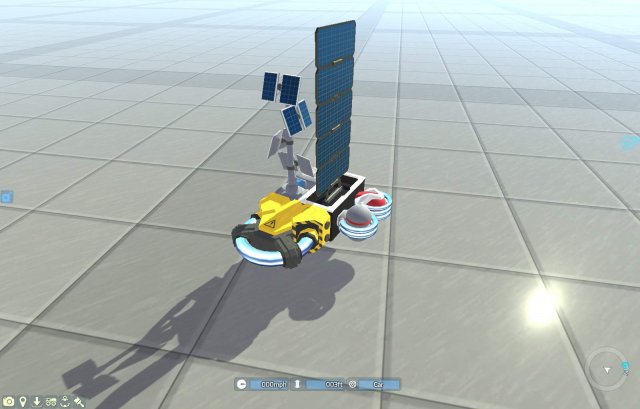 Wireless charges are a very useful part of Terratech`s power economy, allowing you to pass power between points, potentially at long distances, this can easily be setup to create one way wiring systems for large bases, or be used with a support AI to add extra batteries to your tech while keeping them out of harms way.

So, lets work out what each of these does.

Unlike batteries when a few circumstances can lead to different choices, when it comes to wireless charging there is one outstanding and clear winner, the GSO wireless charger, having more than double the relative health of the Geocorp charger, its stronger than the venture one in strength, more than four times more cost effective than it, is far easier to obtain in campaign mode (and in higher quantities) than the Geocorp one, its initial cost for a small base is lower.

It can be said that the only exception would be if you wanted to charge a hovercraft, but anchored blocks can seemingly hold an infinite weight, so it still works out better to just stack up some blocks and use GSO ones, if it really is a problem parking close enough to them, this rare occasion could call for Geocorp wireless chargers

Some other things to note, it does appear there is no latency with wireless charging (no power is lost when transferring) however when using lots of them, sometimes power can seem to be lost if two sources are passing power between them, make sure not to connect two items with passive chargers! 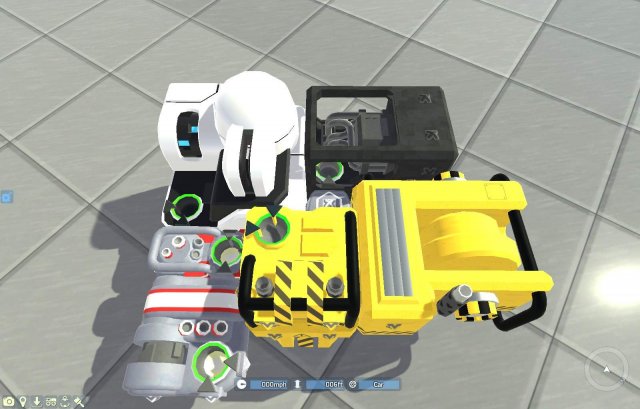 When considering to build a base, or carry a portable source of power, you need to know what generators can do, this section will cover renewables and non-renewables.

Geocorp Geothermal Generator
Cost: 1,890BB
Output: 0.22B/s
Cost to achieve 1B/s: 9,450BB (N/A in a real scenario)
Limitation: Needs a geothermal vent on a mountain
Strength: Excellent early game option, usage limitations do prevent it from beating the GSO solar panel in the late game, though it is still a good all rounder if you plan on building a base in the hilly Biome.

Better Future Solar Panel
Cost: 3,213BB
Output: 0.125B/s
Cost to achieve 1B/s: 25,704BB
Limitations: No anchor, Daytime only
Strength: Its the strongest renewable, though it is not as cost efficient as GSO it provides less lag for giant bases and begins power production at twice the rate of GSO, you will probably use these the most out of any power generation option.

Geocorp Anchored Generator
Cost: 1,308BB
Fuel Cost: 225BB
Output: 0.324B/s
Total Output: 19.45B (60s)
Strengths: Best Generator for efficiency, though only by 10% overall compared to a better future plasma generator, (40% on raw cost efficiency) though its low rate of generation can hamper it compared to the renewable options, with one Carbius fuel rod costing BB1800, over a long period of play, it will be out performed by renewable options, and is comparable to a geothermal generator, which does not cost anything to use.

For Context, in just an hours use, solar panels will permanently generate more power (with fuel costs alone). However this generator does provide a realistic option to get through the night without losing as much power, BB1800 per night is generally quite affordable, when even high level techs can drop 10-15KBB each in the late game.

With Erudian as fuel
Fuel Cost: 699BB
Output: 1.17B/s
Total Output: 16.4B (14s)
Note: this still works out better than buying Fibron with the sold Ingots/crystals at teir 3

Strengths: Produces power from things which are not normally fuel, any waste can be recycled for fuel, Extremely good option with Fibron due to the nature of its scaling, its actually very efficient despite what the tooltip may imply as its actually more efficient than the GSO anchored generator.

Overall, if you need to make power or have some sort of an emergency generator for when under attack, the plasma generator takes this roll on with pride, it generates power at the fastest rate with Celestian, and offers a good option with Fibron if you do not need much fed into your defence, unlike the GSO one though, it can make fuel with anything you have lying around, so you will always be prepared.

For general use, avoid generators and stick to the GSO solar panels, if for some reason you are worried about running out of power at night in campaign mode, the Geocorp generator offers the best fuel to power ratio, for emergency generators in late game bases, stick a few GSO generators on with a venture scrapper and add bricks of Olastic fuel when needed as they are cheaper to buy than the fuel in a plasma generator. (And make 1.1B/s vs the three times more expensive 1.25B/s plasma generator), though the plasma generator offers a unique utility of taking any fuel (and generating at the fastest rate with it, except for Teir 2 fuels)

Oh and before we go there is one more thing here, i suppose i should cover it, it is a renewable afterall.

Dynamo Generator
Cost: N/A (obtained through missions only, random chance)
Output: <0.01B/s
Limitations: Generates a truly abysmal amount of energy, and due to how it generates power, can work out as much as BB20,000 each in small farms.
Strengths: The only mobile renewable, though laughably weak. 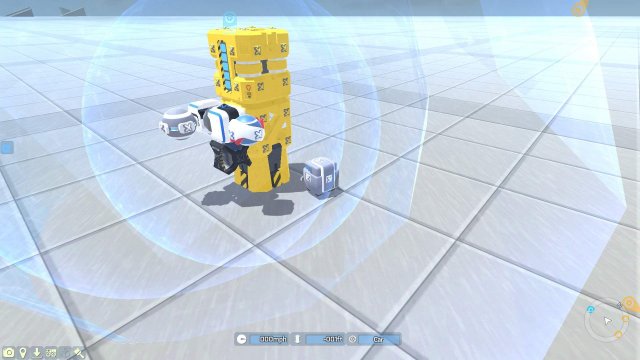 The second to last part of this guide, features some handy information about this games most buggy feature! shields! when they do their job, they stop your blocks taking damage, but please keep in mind that they do not always achieve this and that size is as important as strength or efficiency as it can reduce the overlap bug with explosions.

In terms of what a shield is supposed to do, where practical venture shields are almost impenetrable when compared to other shields as they are more efficient, however Hawkeye shields can cover a larger area freeing up space for other blocks, at the cost of a shields durability.

Unfortunately the real mechanics of shields are never taken advantage of due to the shield bug as the only thing that protects against this error is having the explosion further away, achieved by a larger bubble, making Hawkeye shields the only viable option in campaign once GSO reaches level 5 or Hawkeye reaches level 3 (venture level 3 can also provide a problem with small shields).

Please note, all shields have a “passive drain” effect, while in normal play this is not noticed particularly slowly, it should be noted that the battery capacity of a tech should be at least 5 times the activation cost to avoid passive drain making a tech need to constantly recharge as this effect appears to have been made dramatically stronger at some point without being included in patch notes. 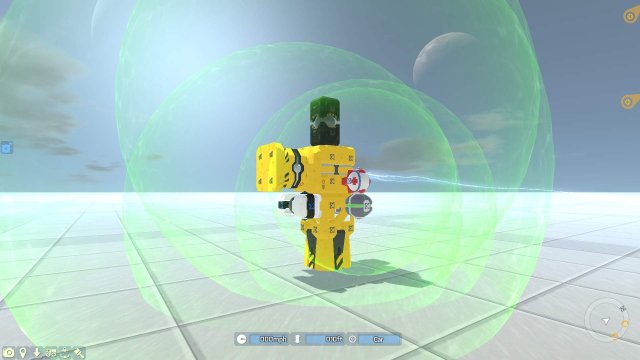 Regeneration Fields or bubbles, whatever you want to call them, are an essential part of the game, they make sure you don`t have to replace blocks in your tech constantly and can keep you alive! they are best paired with shields as they can only protect against a low amount of damage without one.

With repair bubbles, there are a few things that are clear, the venture repair bubble is a complete joke, being one of the worst items in this entire guide, its slow to heal, its tiny, and in practice the energy returns would be outweighed by the sheer number of them to cover a real tech.

With that said though, the extra size provided by the Geocorp one is definitely worth it, keep in mind these are spheres so the extra radius provided will cover ALOT more blocks, its regen rate is good, though if possible, the Hawkeye ones are better where they can be used, as the cost to sustain and heal on the Geocorp one is vastly inferior.

But the real winner is actually quite unexpected, the GSO one still provides enough regen for under most techs shields to deal with light Shieldbugging, and it comes at 1/7th of the cost of all the others, this paired with its acceptable drain rate (where the other two are very high) i would have to say this is the true winner out of them all, Hawkeye being a close second.

So what components should i be putting in my tech? well it depends on three things:

Early game is where your unlocked companies are:

Mid game is where your companies are:

Late Game is anything past the above, with that in mind Lets split this into 3 categories.

TerraTech – How to Obtain the Aerobatics Is Easy Achievement

How to get this rare achievement easier. Aerobatics Is Easy Achievement Guide Basics So this achievement can take a while to make, mainly because is not easy to balance a […]

A guide to achieving all the successes of TerraTech. How to Obtain All Achievements Here Comes a New Challenger Defeat Big Tony (Campaign only) Difficulty: Very Easy Tip: to face […]