Here are all the characters, organized by order of appearence.

Other Children of Morta Guides: 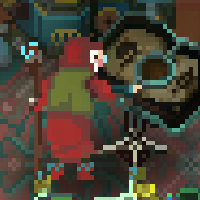 Mother to Ben and John, she is the heart and soul of the Bergsons, containing the knowledge to guide the family in these difficult times. Slowly revealing the secrets needed to defeat the corruption that spreads across the land, threatening life as we know it.

During the first few runs you will stumble on Grandma in one of the random events, where she stands in front of a wall. This will unlock the Book of Rea: A place where you can boost different aspects in the game.

Rescued by John from goblins – they fell in love. Thus continuing the line of Bergsons.

Son of Rebecca and Adam.
After losing his leg to vicious goblins, he devoted his life to the fine arts and crafts of Blacksmithing. Thus becoming the family’s source to weapons and enhancing them.

After your first run you will immediately open Ben as your Blacksmith, enabling you to enhance the different aspects of your characters. These buffs apply to all family members.

Son of Margaret and Adam.
Father of the family, John carries his ancestral sword – the one that was wielded by his father Adam. The sword was recently found when John returned home to search for his father in the Caeldippo caves.

John is a sword & shield wielder, able to swing at large groups of enemies as well as blocking incoming hits and striking from behind his shield. A great all-round character.

Eldest daughter of Mary and John, music is her love.
At a young age she were taught by her father to use the bow – a weapon she felt a connection to, not unlike her violin.

This is your first ranged character. She gains bonuses from hitting from afar without moving but can fire while moving, this in turn drains her stamina. Regens when not shooting/moving.
Good mobility but can be countered by large groups of enemies. Her Right Click ability can help with that as well as some runes.

The younger brother in the family, he and Mark hold a close bond to each other.

The quickest and boldest in the family, Kevin carries two daggers. He moves at high speed, easily maneuvering across the battlefield and quickly disposing of enemies.

Kevin builds rage as he successfully hits his targets, further increasing his attack speed, thus able to mow down mobs and bosses at very high speeds

Elder son to Mary and John, after being saved from death by a monk, he decided to dedicate his life to follow that path.

Mark is a monk melee fighter, his Left Click attacks dashes him between enemies in range at high attack speeds causing AoE damage around the target. Great for fighting groups of enemies, difficult to avoid damage. Combines Right-in-your-face tactics with great pulling mechanisms, stuns and knockbacks.

Children of Morta – How to Play Online Co-op

Guide to Play Online Co-op Online connection is based on Peer to Peer so only the users from the host’s friends list can be invited to the session. All interactions […]

Children of Morta – The Workshop Guide