How to get the Stronghold V achievement for Insurgency.

Stronghold V = Survive to wave 20 on any map on the Outpost game mode.

This will be easiest the more friends you have in the server, just to reduce your reliance on random coop players. Microphones are useful, but not necessary.

Your chances of success will be much greater with at least one friend (or someone who will listen to you). So I will refer to two roles, Person A and Person B. It is doable with just Person A and a lobby of half competent players, but much more difficult.

Before you get discouraged, I got the achievement as Person B with a random playing the role of Person A. There were no microphones. So it is possible.

Other roles will be called Person C, D, etc. From my time playing, only Person A and Person B was really “standard”, but I have designed the Person C and D roles to counteract the weaknesses I see with just Person A and Person B. While optional, they will make your chance of success higher. This strategy is very consistent, but it’s not 100%. Sometimes, a molotov just lands from 10 miles away on to the cache.

Go to a coop server. Vote for Verticality outpost. If the cache is not labeled B (check the bottom of your screen), vote for round restart until it does. Generally, randoms will vote yes for anything. Then vote for Forgiving difficulty and Forgiving bot count.

In order of importance:

Person A needs to pick Support class and take an M249 with AP ammo. As they upgrade, they might get a heavy armor and carrier.

Person B needs to pick Specialist and take the Galil with AP ammo. In a couple waves, they should have the drum mags. After that, heavy armor and maybe carrier.

If there is Person C, just have them take a rifle with AP ammo, heavy armor, and incendiary grenades.

If there is Person D, just have them take a rifle with AP ammo, heavy armor, and incendiary grenades.

If there is Person E or more, have them take something with AP ammo, heavy armor, and grenades.

Person A and Person D

You will be responsible for around 50-60% of the total kills. If you are Person A, you need to run to the far right, cross a little plaza in to a building, and get to the second floor. There will be a ledge overlooking the plaza you just crossed. The view from there with the bipod will look like this: 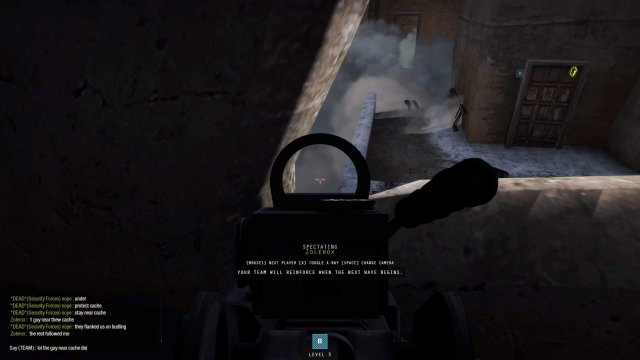 It is almost impossible for Person A to die in this position. The bipod elevates your head enough so that you can see the bots, but the bots can not see you. They can “hear” you, but get very confused and do not shoot towards you. They may throw grenades toward you, but end up killing themselves.

Ways you can die:

To minimize this happening, you need to expose as little of yourself as possible so that the bots can not see you. Still, very very rarely it happens. In the round where I got the achievement, Person A did not die at all.

Now just wait and click (one time) on each bot’s chest/upper body. You shouldn’t need to use more than 1-2 bullets per bot.

There are times when the pea-brained bots will smoke the courtyard (they may be programmed to smoke areas where a lot of bots are dying, or maybe you just killed some before they throw.) In this case, you may still be able to kill some bots, but a lot will get through. You must notify the team.

Sometimes, you need to reload. You must notify the team.

Sometimes, you need to go back to the cache for more ammo. Try to time this between waves. You must notify the team.

Listen for footsteps behind you.

You are here to support either Person A or Person B.

Ways you can help:

Also: try to get your teammates to stay away from this position. Because they’re curious kill-hungry ♥♥♥ heads, people will come and try to get some of the kills for their useless KDA and usually ♥♥♥ up the bot patterns.

The other option is to just play the same position as Person B, essentially being a copy of Person B. If Person B is having trouble, this could be more helpful.

Person B and Person C

Your job is to sit on top of the building next to the cache and watch for leaks from Person A and the left side. Probably 80% of bots will pass in from the right (where Person A ran up to get to his spot, the dirt road with snow on both sides), but some from the left too (area with fence). 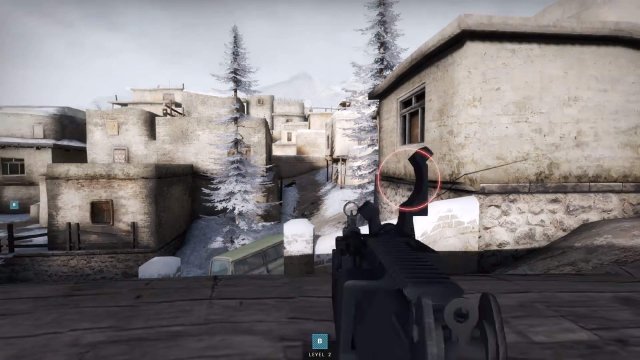 Prone and don’t stand up, stay away from edges. You will be RPG bait, but all RPGs will miss. You can get shot though. If Person A says he has a situation (e.g. reloading) you need to be extra careful.

Let your team know if you run out of ammo, die, or for whatever other reason bots can make it past you so they can react. You have a good view that 99% of bots that Person A does not kill will pass through.

You play close to the cache, like on top of it. Very rarely, a bot spawns behind the cache, and this can ruin a perfect run. You need to be aware of this. If you really care about winning, don’t expose yourself just to get kills. Yes, it’s boring, but you can’t help if you’re dead.

If you’re confident that the cache is safe, maybe play closer to the road in the second screenshot. Throw incendiaries and cover for Person B’s reloads.

If Person A/B/both die, you all need to come back to the cache and hold out until the next level starts.

Throw molotovs in to chokepoints and try to cover for A and B. Most importantly, don’t die. Don’t play forward positions, and stay within ten seconds of the cache. You need to be able to get back to the cache. Stay near the cache.

Conserving ammo and proper but quick aim is important. You should be on single fire mode on some sort of rifle. In a bad situation, it might be useful to use the bots’ equipment rather then reload/go back to cache. However, don’t die just because you see something shiny — move carefully. Other than that, its just game sense/skill, but you will improve.

Insurgency – Tips and Tricks You May or May Not Know

This guide will be my compilation of helpful tips and tricks for playing Insurgency. ContentsWeapon and Equipment Handling Tips and TricksThe Two Main Playstyle of InsurgencyWhen You’re AloneWhen You’re With […]