We all know why you bought this game… So lets make it easier (in case you are stuck and don’t know how to acquire certain scenes). Now, click on it and step through the door of degeneracy with me.

This game has a dating system:

NG+ will help us with clean up:

There are Side characters. We’ll talk about em:

Now that that is done and over with, let us actually start.

The Girls (The Side Dishes)

So there are 11/16 or so girls in the game that have an ending. 16 of the girls have a lewd scene. I’ll start with the side characters as some of them involve you doing particular things in order to get their scene.

Mikoto is the girl you see in the very beginning of the game and also has the first scene going by gallery order. All you have to do to get her scene is just not go to the vending machine, let the scene play out, and then you’ll get a decision. Just click “See You Tomorrow” because its common sense and keeping things formal and polite between two friends. After that just play the game and once you get to chapter 7 defeat the boss and she’ll come to your room. A scene will play and you’ll get an option. Just choose the top one.

Izumi can be seen through going to the vending machine and buying the soda you deserve. She’ll ask you to help her from a stalker, which you will do, and then a fight happens. Now Izumi has two scenes, where losing gives you one scene, while winning gives you an item and an even better scene later in Chapter 7. So, I recommend to do the lose scene when it comes to NG+, and then save. Because you MUST save the game in order for it to actually be added to the gallery.

She’s the nurse of the Hopes Peak Academy and her scene can just be acquired through just playing the game. So no worries there.

These girls are in Chapter 1, but not introduced until Chapter 2. Now these girls have two scenes. One as a group if you decide to just ♥ around and not go to the Church that is located on the top left map. If you ♥ around by going to Canaan Paradise when you the time comes, a scene plays out once you go to the place you need to go and they die. The other is you not f*king around and then meeting them later on in Chapter 3. They all have individual scenes if you succeed.

Once chapter 3 starts, go to the Music shop, watch the scene, and choose “GO HOME ALONE” . If you do a scene will play and she’ll promise to teach you how to play the Bass, and all you have to do is visit her on certain days during chapter 3. Make sure you do not miss a day, as you will not get the scene if you do! So, if a text box opens up when you are at school, just visit her shop that is next to the Music store.

Mika is the teacher and her scenes also only play during Chapter 3, much like Natsuki’s. So in order to start Mika’s quest or wtvr, you must have chosen the “Go Home Alone” option and saw the scene with Natsuki. Once you see that scene go up to the red light district and just go right until a scene plays. After that confront her at school the very next day. Monitor her here and there, as you play the game. As time passes and you keep visiting Natsuki and wooing the party members, an important scene will play as you will need to infiltrate a Church. When you are on the map go completely right to a new destination. A scene will play with a cool dude and another scene with Mika.

This is where it should be. But when you have to go and see the scene, it’ll be dark and you’ll only have three places to choose from. 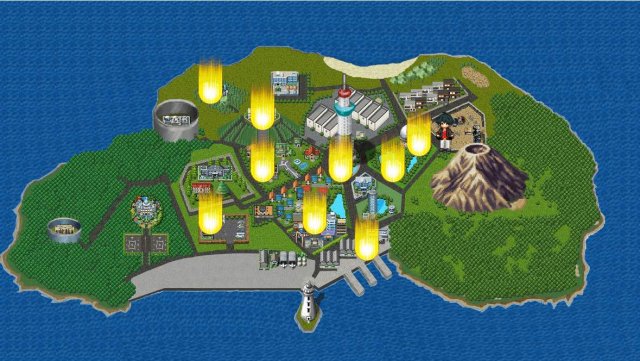 Once that’s done just do the mission and then go to the faculty office and have a conversation with the Nurse and a scene will play. After this keep your eye open on the map in case any new locations pop up. They should pop up to the right of the park where you meet Keiko. Once that shows up visit and some scenes should play.

Now once that’s all over and you see Natsuki’s scene, go visit the hospital where her sister is now staying, and a scene should play.

Ritsuka acquires some time to pass within the game. Like a few chapters or so. So on the 28th of May, go visit the control room at HQ. Talk to her and just be yourself. If you didn’t visit her on the 28th of May then don’t worry, because you can trigger the scene in June. After that scene we go back to the Control room and talk on 13th of July. Let the scene play and choose some answers. After that we just Wait and Hope and check back now and again. After some time has passed she’ll be on Section A within the HQ near some vending machines and say she’s cute. After that let a little bit of time pass and go back to HQ. Once you back at HQ go to the room left of the Control room and talk to her. A scene should play and just say lovers. After that come leave the HQ and let a day or 2 pass, go back to HQ, leave immediately and her actual scene should play.

Clear chapter 4, let chapter 5 play out and then visit that shady shop near on the left of the flower shop.

Now that that is done and over with, we can finally move onto the main girls.

The Beginning of the Main Girls (Short)

Alright, hopefully you are still with me, I’ll try and make it short. So…….. lets talk about it. Each character basically have Social Link scenes that play and involve choosing the right answer. I’ll help you with that. I’ll also tell you where to find them . Also make sure you go on a date with just one individual which comes into play in Chapter 5 and 6, as I mentioned earlier in the guide.

Akari Kinoshita is the MC’s childhood friend and has a scene in chapter 6 if you went on 3 dates with her and also chose her in chapter 5.

Location and day of the scene: the 3rd of August, Go to the Infirmary at school.

Satsuki Saijou is probs best girl imo, but gameplay wise she’s average is applies more as a buffer if anything else. She also has a really hot twin sister. Sadly she doesn’t have a scene, but life really do be like that sometimes.

Konoha is an amazing character stat wise as she can hit like a truck. Also one very important thing about Konoha is that in order to do her Date 3, you must have hung out with her and visited the Club room a few times. Make sure you talk to her every time you visit the club room as it gives you a buff sometimes, but also will increase in members after every one of her SLs.

If you are choosing her to date make sure you periodically check up on the clubroom and talk to her. This is essential for her Date 3.

Remy is also a good unit as one of her skills is Magic Reflect. But who cares about that. So Remy actually has a scene in the beginning of chapter 1 where you are able to waste 2 WP to hang out with someone. You can find her in the living room.

Now for the answers and location.

Kenshin is the child looking character and is swole as well. So much so she can hit the enemy like a truck hitting an isekai protagonist.

Nana is the scientist that gave you the physical in the beginning of the game. She’s a really good mage and healer.

So now that we went over the answers for the SLs, it is now time to talk about Chapter 5 and 6.

In Chapter 5 you will go to the beach with everyone in your squad. You’ll choose who you think looks best in the swimsuit (Go for the girl you have gone on a date with 3 times imo) and will have to later choose a girl to go on a Jet ski ride with. For this, you want to choose the girl you gone on a date with three times in a row, this will unlock a scene later in the chapter.

And chapter 6, once chapter 5 is over just play the game and the girl you went on a date with 3 times in a row will visit your room and a scene will occur.

Also if you made a save back in Chapter 2 during your NG+ play-through you can load up the save and get all of the character exclusive scenes.