Just a bunch of tips that might help making your journey through Monster World in search for the cure more easily.

The game is full of secret rooms. Those places have hidden doors, so if you stand on them and press Up, you can access them.

I won’t list the location of all secret rooms in this guide, just the relevants. But if you see some place suspicious, inspect away! 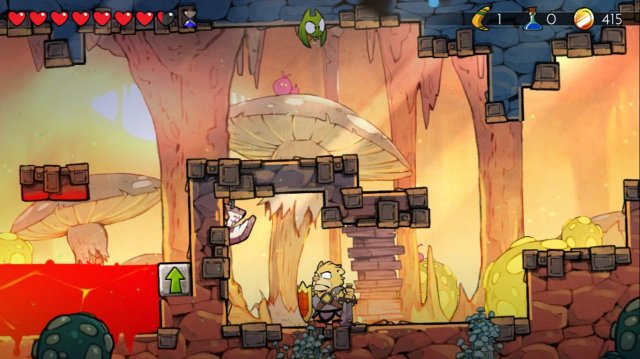 Some dragon dungeons are quite nasty, and you may find yourself dying 2 rooms from the dragon room. So I always recommend having 2 or 3 potions before going out. Potions revive you with a random number of hearts when you are defeated.

I also recommend 1-2 boomerangs. Those sub weapons can be re-used as much as you want, as long you catch them back when they are returning. They can help you deal with enemies much easier (like samurais in Damyo Temple).
Having some arrows to deal with the Cloud enemies helps a ton too!

For that, there is a secret shop in The Village, inside the windmill, that sells some Sub weapons.
Don’t go out unarmed! 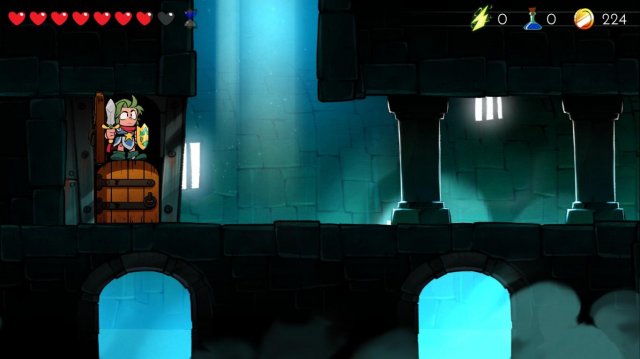 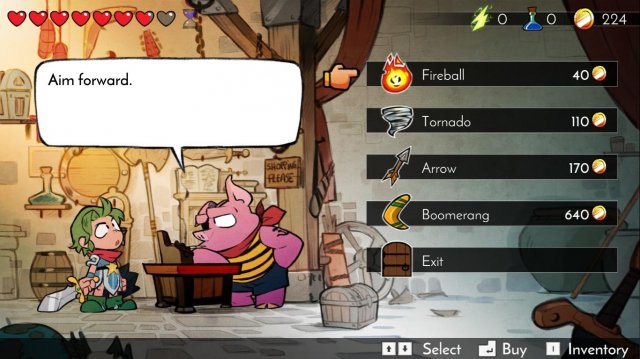 Speaking of Potions… going back to The Forest to buy them can be tiring. And even so, they are quite expensive! So here is a very useful tip.

If you have full health, they will always drop Fireballs, and sometimes, Potions! You can come back here to gather potions if your last attempt wasn’t very good.

Just leave the screen and come back.

There are other locations like that that you can try look for itens (Like the Spectres at the end of the lava section in The Underground). 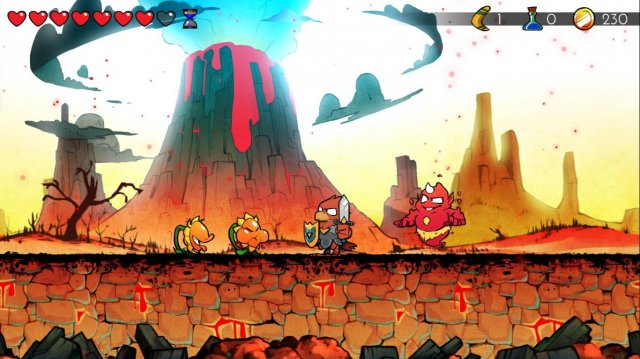 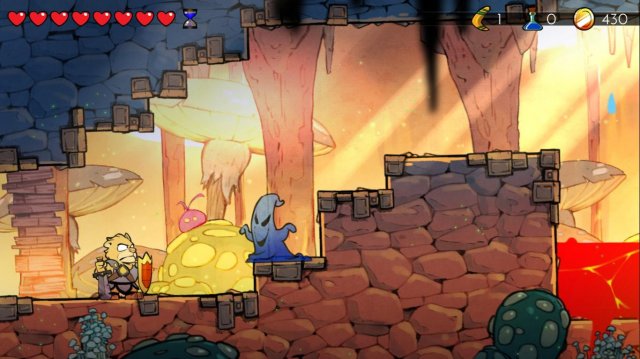 As you explore Monster World, you will always find some chest rooms that gives you some good cash, and some itens sometimes! However they are one time use. Not exactly.

If you select ‘Return to the tittle’ and go back to those chest rooms, you can get their contents again! Pretty useful if you need some quick cash, and have access to quick chest rooms (Like the one in The Village). 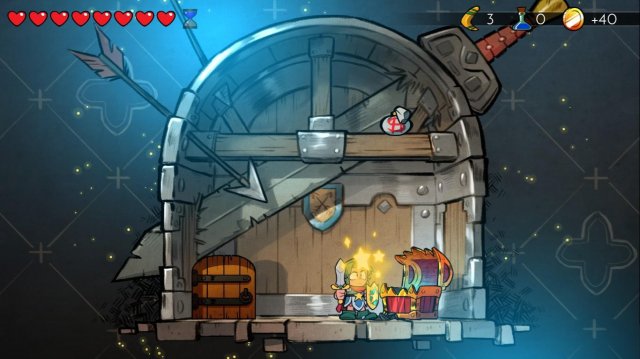 If cash isn’t coming as quick as you wanted, try using the Lucky Sword.

Lucky Sword can be found in the shop blocked by breakable blocks at the top of the well in The Village. (You need Piranha-man or Hawk-man to get to it).

As long you are equipped with it, all money you get will be increased. This even applies to chests! So make sure to equip it before opening them. They have a limit of 100 gold per sack though.

You can notice quite well the effect of the sword when defeating Captain Dragon for example. He will start dropping coins(1~19 gold), but if you change to the Lucky Sword, they turn into money sacks(20~100gold). 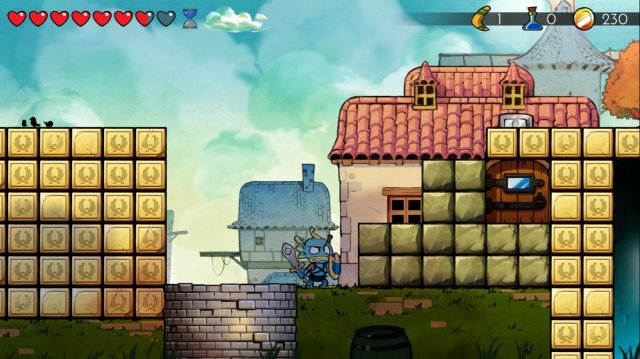 3 Potions are Not Enough?

If even with 3 potions aren’t helping you get thought some locations, Hades Armor can help!

Hades Armor can be bought at the top of the Damyo Temple entrance (still in the Underground Area), or dropped by blue Samurais inside Damyo Temple. As long you have it equipped, you will be revived once when you are defeated (and have no potions).

Make use of this armor, even when you get better ones! If you are about to die, quickly change to it! It only works once per ‘Game Over’ though. 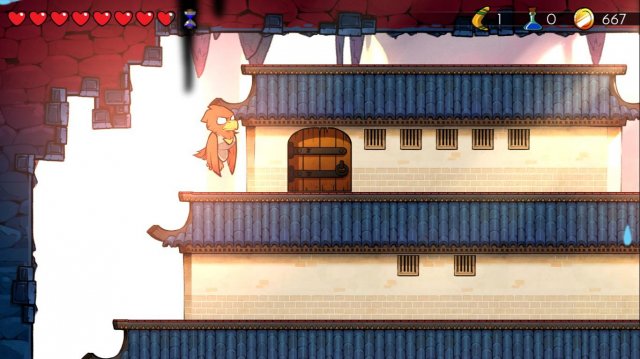 Hearts never drop when you most need them. So why not give them a boost?

Prince Armor, which can be bought at the ‘Mouse Block’ Shop in The Village have a special effect that raises the drop ratio of hearts.

Make use of this armor, even when you get better ones! If you need some quick recovery, find some enemies that you can defeat quickly and safely, equip it, and get some health back! 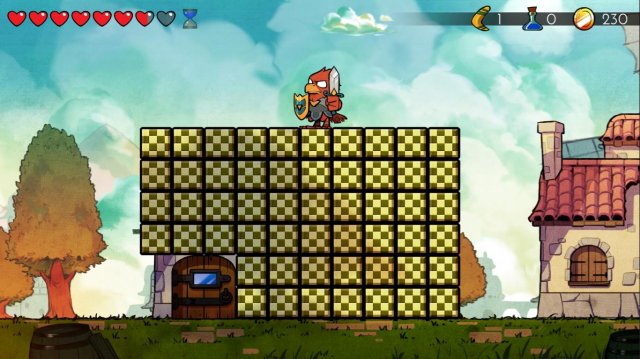 Attention to Your Shields!

Every animal form has a set value of attack and defense. But, they also have Shield preferences!

Always check your shield equipped, and shield options to buy when you change forms. For example, the Aqua Shield offers 0 defense as Lizard-man, but 85 as Piranha-man! 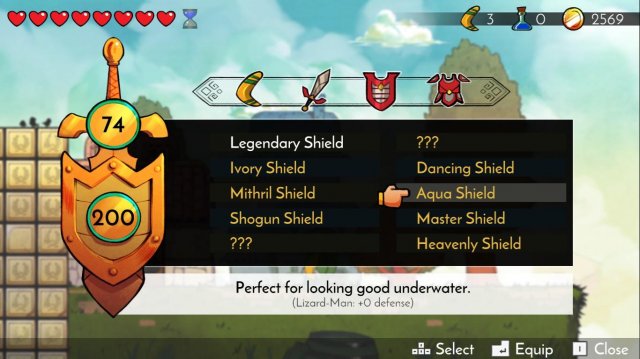 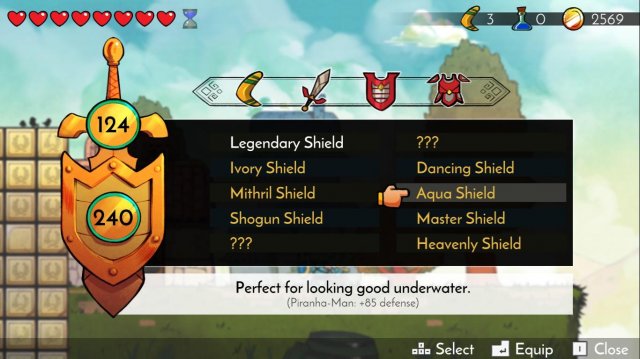 After you change to another animal form, that doesn’t mean you are locked on it until the next dragon! As you play you will find ‘Change Rooms’.

These rooms allows you to go back and forth in your animal forms unlocked. And you can get one in The Village!
After getting the Thunder Bracelet, break the block inside the house with the well to reveal it. This is a easy spot to change forms and explore! 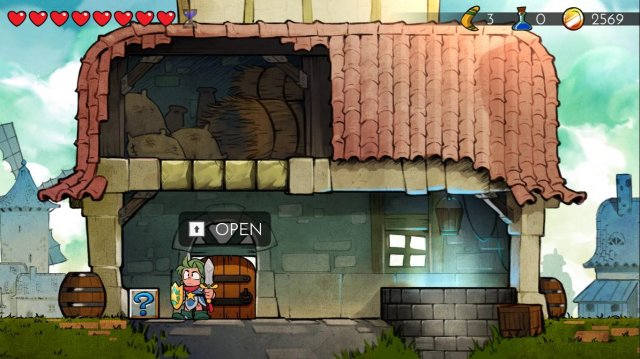 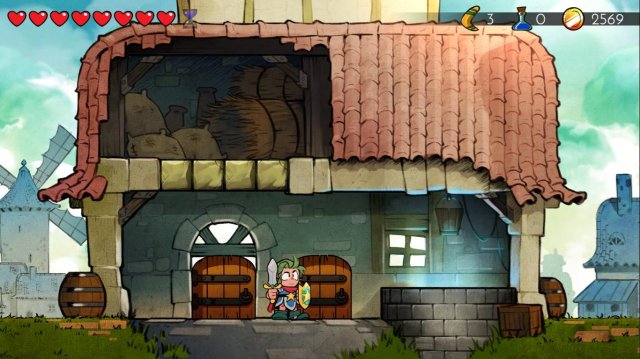 Still, going to those rooms can be tiresome.

So, there is a special sword in the game that allows you to change anytime! The Tasmanian Sword can be found in a secret shop in The Underground.

With it, just hit Up+Attack while in the air to change!

The game locks the change in some areas tough, like tigh places where you wouldn’t fit, and The Unkown areas. 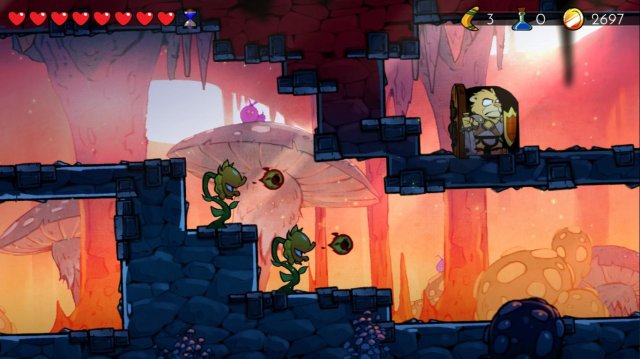 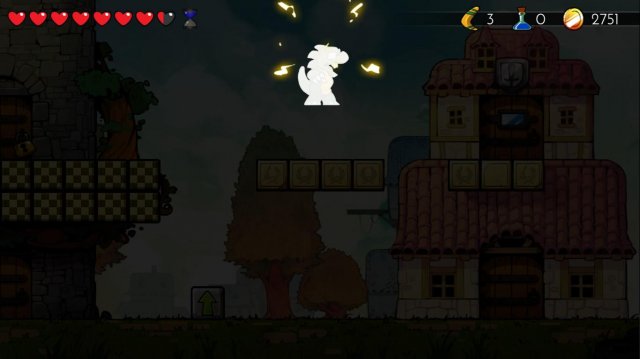 Wonder Boy: The Dragon’s Trap – Easy Gold and Items Early in the Game

Fast, easy gold and items very early in the game. Other Wonder Boy Guides: Gameplay Tips. How to Be a Millionaire? Or Just Rich? Loot Hunt. Gold Guide! Easy Gold […]

Another way to raise gold and get other loot well before the end of the game. The Method I want to bring you another guide about getting gold and loot […]

I have a handy tip for those in need of $$$ money midway through the game. Other Wonder Boy Guides: Gameplay Tips. How to Be a Millionaire. Loot Hunt. The […]