This guide aims to show you how to simplify the inputs required for King’s chain-grabs by utilising two simple concepts.

I often hear people complain about how hard it is to do King’s chain-grabs on a gamepad. And it’s a valid complaint. Heck i was one of the people complaining up until a couple of years ago when i sat down to find out why i was having so much trouble.

I found that there were two main hurdles that stopped me from being able to pull off chain-grabs successfully. The input itself and having to memorize the entire chain.

In this guide we are going to focus on simplifying the input and by doing that we also (hopefully) make it much easier to remember a full chain.

Now, let’s start with something very simple that i always do when playing a Tekken game.

Tekken is a 4 button fighter that very often requires you to press multiple buttons at the same time.
And King’s chain-grabs require you to press different combinations of 2, 3 and even 4 buttons in quick succession.

This is a problem on a gamepad because of how close the buttons are to each-other.
Seriously, try doing on your gamepad right now. It’s not a fun input. And that’s just one part of a three move chain!

The default mapping in the non-TAG Tekken games usually leaves the four shoulder buttons unbound and that’s a waste of buttons.

Tekken 7 however uses the R1 and L1 buttons for story assist and rage art. The story assist button is useless outside of story mode and you really shouldn’t need the rage art button.
So let’s start by fixing our button setup to simplify some of the required inputs.

This is how i map my buttons for King.
The first thing you’ll notice is that i moved the rage art and story assist buttons to the sticks.
This frees up two additional shoulder buttons that we can bind to something more useful. 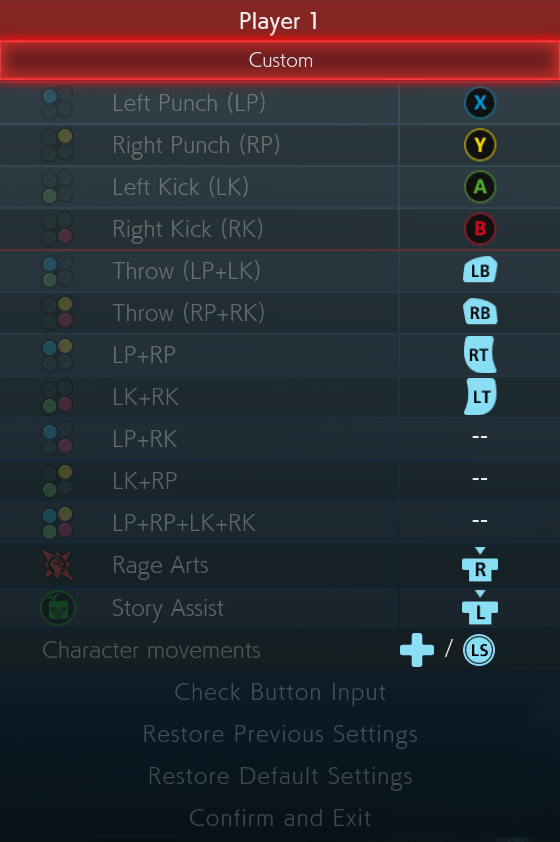 Some people would rather map LP+RK or LK+RP to a shoulder button too but for now this setup works best as it also makes memorizing some chains a bit easier.

Now with these new bindings in place you’ll find it much easier to pull off many moves in Tekken 7.

This concept is pretty simple. We are going to look at the move list and every time we see a move that requires multiple buttons we simply replace those buttons with the corresponding shoulder button.

Now, remember the input for the Rolling Death Crade(RDC) from earlier in this guide? If you look at the input and “translate” it to shoulder buttons you’ll get this.

You’ll see that this new input is a whole lot easier to pull off and as an added bonus it’s much easier to remember too! On a PlayStation pad this would be L1, L2, R1, R2, L2 + R2.

Notice how the original RDC should end with a 1+2+3.
Instead of pressing LB+RT you can press RT+LT, that’s the same as pressing all four buttons at the same time and it actually registers as a correct move because the game seems to think that 4 = 3…

I find it much easier to remember RT+LT but feel free to experiment with different combinations.
The inputs are actually pretty forgiving as long as they come in the right order.

You can do this for pretty much all of King’s chain-grabs and you’ll have a much easier time both remembering and pulling off the moves.

Some moves are still somewhat hard to pull off even if you use the shoulder buttons. We can make those moves even easier by utilising what’s called button buffering.

We’re not gonna go too deep into button buffering as it is a pretty extensive subject and others have done a much better job covering it than I’ll ever do. We’re only going to cover how it applies to our use case.

I really suck at explaining this so i suggest you go to training mode and enable command history under the display settings to try it out yourself.

Just try hold down RB and keep it held even after your move finishes. Now press LB and you’ll see that the game thinks you just pressed all four buttons.

You can now let go of LB and press it again (while still holding RB of course) and it still registers as four buttons.

Basically what is happening is whenever you press a button the game thinks all the buttons that are currently held down got pressed. This is pretty useful for some of our throws.

We can use the translated RDC as an example again.

At the end of this input you need to press RT + LT.
This can be a bit difficult as the timing is somewhat strict. The game has to register four buttons at the same time.

Now because of the way button buffering works you dont actually have to let go of the RT button prior to pressing LT. What you can do is press LB, LT, RB, RT – and keep holding RT… and then press LT!
The game will think that you pressed LT and RT at the same time.

This helped me immensely with many of the chain-grabs because the L2(LT) and R2(RT) buttons on a PS3 are hard to hit at the same time.

Unfortunately timing is outside of the scope of this guide. I recommend checking out the demo in the move list.

The only tip i can give with regards to timing is that you should try to avoid mashing everything out. You have more time than you think you do (for the most part).

Remember, the moves are supposed to be doable with at most four fingers on four buttons. You have access to four fingers on two hands + a thumb and a total of eight buttons! Use that advantage.

Putting It All Together

We’ll now go through the full RDC chain and how that looks like when translated.

The red line means you can button buffer the input.

Notice how we translate the 1+2+3 from the Chicken Wing Face Lock to LB+RB. This is only because i find it easier to remember and it works because as we know 4 = 3…

I suggest practising the Reverse Special Stretch Bomb because the timing is much more forgiving between the moves.

This chain is however much shorter, easier to remember and it does more damage.
But hitting that initial throw means you need to let go of the shoulder buttons.

I can’t guarantee that this guide works for everyone, but i do hope that someone else can find this information useful.

You don’t have to use the same button setup that i have. Feel free to experiment with different and find what feels the most comfortable to you.

And as with everything else, keep practising and you’ll get there!

Here’s another quick example of an easy to pull of chain-grab. 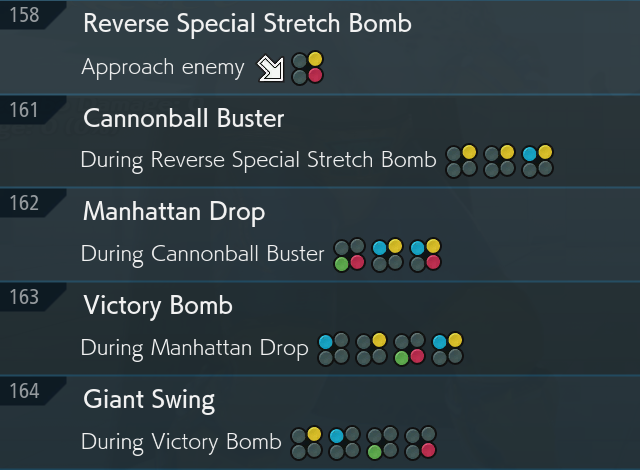 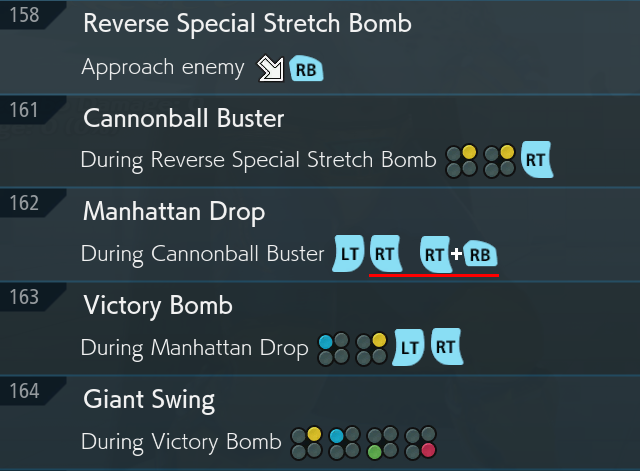 If you are unsure of any terms, I have written a glossary which hopefully includes it and will explain it for you. Glossary Backdash Cancel (BDC) – is basically cancelling […]

Useful T7 Info: All Characters. Glossary.  Heihachi Mishima Difficulty – Advanced Heihachi can be defined as a powerhouse character in T7. He is a Mishima so that comes with the […]

Useful T7 Info: All Characters. Glossary.  Lili Rochefort Difficulty – Easy The French speaking (but not actually French) daddy’s girl makes another appearance. Lili is a bit of an extreme […]