Guide to Weapon in Multiplayer Mode 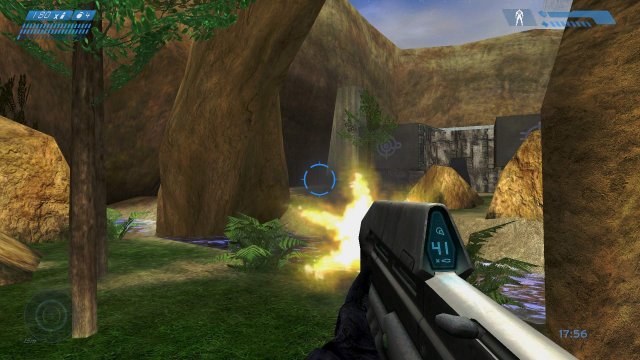 This is one of the worst weapons in the game and its usually one of the fastest ways I can tell if someone is an amateur player – if they are using this over the pistol on generic start game types this is a clear indication that the player doesn’t understand how weak this weapon is. It has a large clip and is capable of high DPS but the problem is its accuracy is awful against anything other than an opponent who is literally right in front of you. And in that situation, you would be better off using a shotgun, not an assault rifle. I still remember how surprised I was with how weak this weapon is after I was done with the campaign and played my first few multiplayer matches. Long story short no matter what situation you are in there is always a weapon better than the AR you could be using. The AR’s best use currently is to quick camo yourself if you have camo rockets. 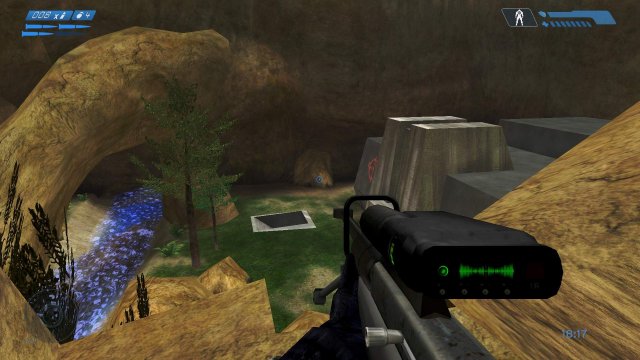 A very powerful long-range weapon, capable of one-shot killing non-overshielded enemies with a single headshot. It kills in two body shots against a non-overshielded opponent (three if they happen to have the overshield). In my opinion the sniper is less effective in this game than in later Halo versions as its more difficult to headshot an opponent (the difference between the H1 and H2 snipers is very apparent) and because of how dominant the pistol is in this game. That said its still one of the best weapons in the game and almost always worth picking up. 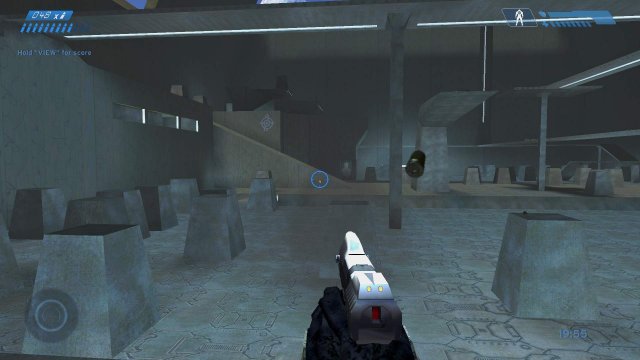 The most powerful weapon in the game. It’s capable of killing a non-OS enemy in 3 shots in 0.6 seconds so long as the third shot is a headshot. It takes an incredible amount of skill to use and to date I can’t think of another arena FPS game where a weapon so dominates a game the way the pistol dominates H1 multiplayer. This gun is so powerful that throughout competitive Halo tournaments it was quickly decided early on that you had to spawn everyone with this weapon b/c if you didn’t then whomever would spawn closer to the pistol on certain maps could literally go an entire game without dying – it was the only fair way to run tournaments (you were basically fighting against opponents who couldn’t fight back if you grabbed the pistol first). Also, don’t ever hold down the fire trigger to auto-fire this weapon as you will run into a massive penalty in accuracy. You can single shot fire it one shot a time at the exact same speed as the auto-fire with no hit to accuracy whatsoever. 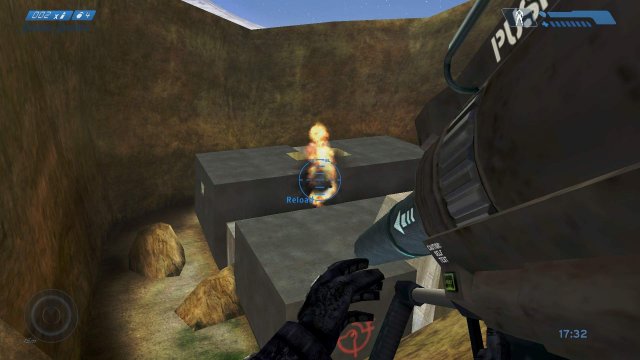 One of the only true power weapons in Halo 1, in contention with the pistol as the most powerful weapon in the game. Almost always respawns every 2 minutes on most maps (one notable exception is Derelict where it respawns every 30 seconds). Due to its low ammo count you won’t be able to hang onto this weapon for long but it’s very effective when you do have it in your hands. 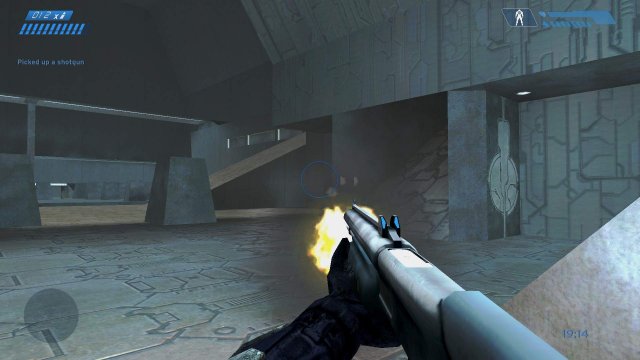 A great close-range weapon, capable of one-shot killing non over shielded enemies if you are very close to them. It’s an overall average weapon in this game and is not nearly as powerful as some of the other shotgun versions in later Halos as it lacks the same range as those to do (in this game you literally have to be right in front of your opponent to get a one-shot kill). I sometimes swap this out over the AR if I happen to respawn next to one otherwise, I usually ignore it. 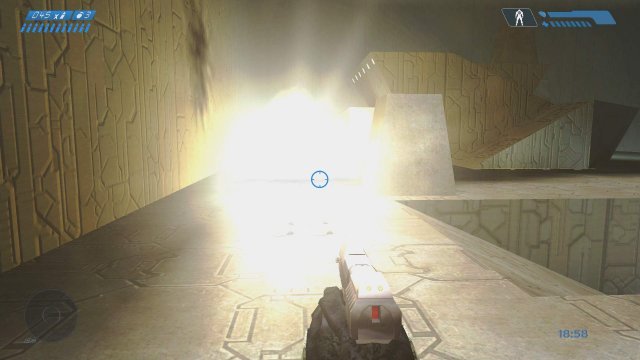 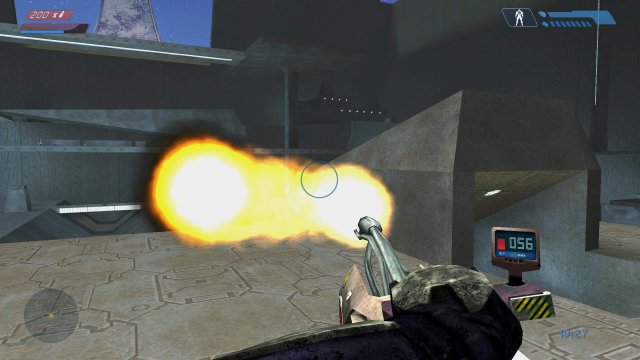 Functions as a more powerful version of the shotgun. Unless you are playing the PC version exclusively or some variant of social big team battle you are unlikely to run into this weapon in game as the settings in HCE via MCC attempt to mirror the original xbox game so this weapon (along with the fuel rod cannon) is usually disabled. 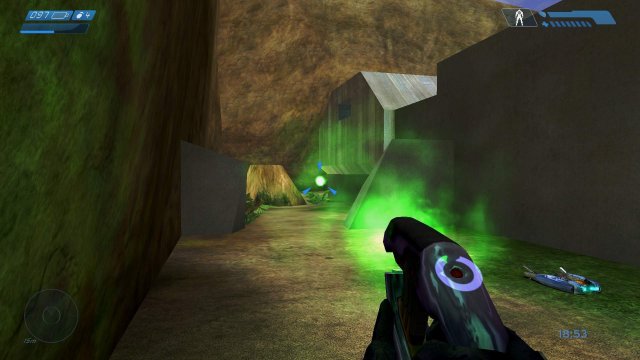 Arguably the third weakest weapon in the game, with the needler being the first and the assault weapon being the second. It has two fire modes – its single shot is capable of paralyzing an opponent on the original Xbox version and it has no cap on the rate of fire so you can fire it as fast as your finger can pull the trigger, but the gun will overheat quickly. Usually you have just enough time to stun lock an opponent, knock off their shields, and go in for a melee while hoping the melee will finish the opponent off before it overheats. In its secondary fire mode, you can hold down the trigger to charge up a shot that will completely remove an opponent’s shields if it connects. This is a great way to knock off an opponent’s overshield but the problem is its too inaccurate to rely on – just like the needler you will have to catch an opponent off guard to have any chance of this connecting. I generally recommend you avoid picking this gun up. 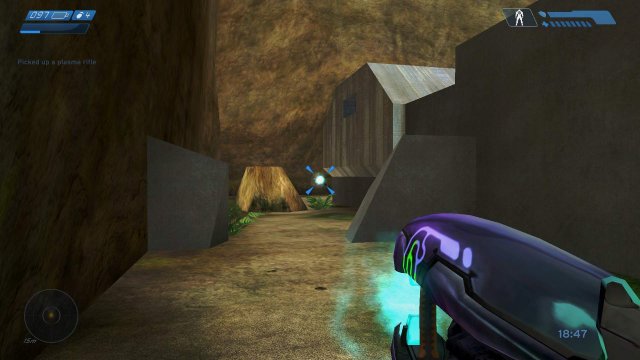 The effectiveness of this gun will largely vary on whether you are playing on the PC version or the original Xbox Version. While both guns do the same amount of damage, the Xbox version of the gun had a powerful paralysis effect that stunned targets for as long as you were damaging them making that version of the weapon more powerful. As covenant weapons shred through shields this gun is a great way to knock off an opponent’s over shield if you can get within close enough range. 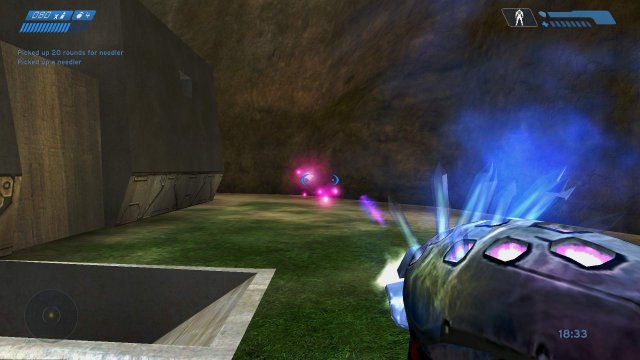 Easily the worst weapon in the game. It fires multiple pink needles that have a homing effect and if enough of the needless connect with the target they will combine to create an explosion that can kill the opponent. Sounds great on paper, but the reality is that the homing effect can be easily dodged by strafing and you will have to catch someone with their back turned to have any chance of killing someone with this weapon (in fact, if someone is strafing not a single one of your needles will connect). Avoid this weapon at all costs. 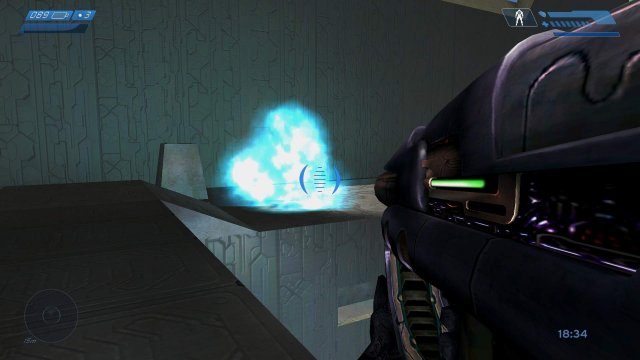 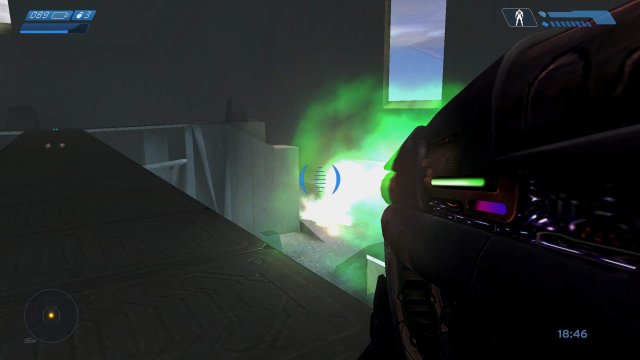 Almost functions like mobile artillery does on an RTS game. It’s a power weapon just like the rocket launcher and has a much larger ammo capacity. It has two downsides; it can only fire in an arc (which means you need to have an elevated position on your opponent if you want most of your shots to connect) and it is capable of overheating. But on the PC version, on maps like damnation CTF, you could pick this up and completely decimate teams as they were respawning. 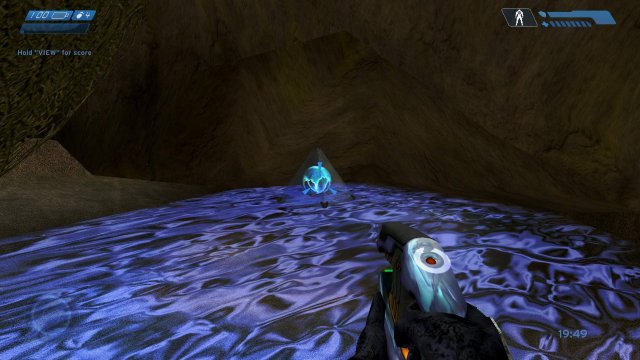 Cloaks you for 45 seconds after picking it up. The camo on this game is much more effective than some of the later Halos and if you have a choice between setting up for the camo or OS the camo should be your priority. 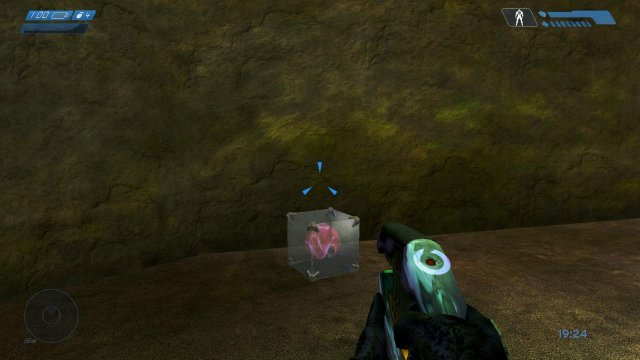 Triples the strength of your shield. The shield will slowly deplete back to its normal strength so its recommended that you charge into battle right away after obtaining it to maximize its effectiveness. While the over shield is charging you are immune to all damage and can only die to an assassination. Be warned: unlike later Halos in Halo CE there is no visual indication to signal you that an opponent has the OS.

The power ups on Halo CE respawn on a static timer. The camo and OS generally respawn every 60 seconds on most maps (one exception is the camo on Rat Race which respawns every 90 seconds and the camo on Chill Out is on a 2 minute respawn). The rocket usually respawns every 2 minutes. There are a few maps where the powerup can vary as to whether it is an OS or camo (such as the powerup in the middle of Blood Gulch and the power up on the very top of Hang Em High) and in those cases the power ups are usually on a 3 minute respawn.

If you have a choice between the three here is how I rank them in order of importance 1) Rocket 2) Camo 3) Overshield. In most team games if you are properly timing its usually worth it to split up amongst the map to ensure you grab as many of the power ups as you can when they respawn.

I can’t stress how important enough timing the power ups is in order to come out ahead in Halo Matches. This skill is so important I am creating a separate section for it just to highlight its importance. Just like someone who chooses to use the AR over the pistol I can quickly tell if an opposing team is timing or not by how often I am able to grab power ups uncontested when they respawn and it’s a sign of a very inexperienced player/team if they are not timing these power ups.

Because all the power ups respawn on a static timer good teams will take the time to position themselves around the map in order to grab as many as they can. This usually takes place around 10-15 seconds before they come up and losing a battle for either the rocket or camo is critical as the rocket gives the other team almost 4 (at a minimum) guaranteed instant-kills and the camo lasts for 45 seconds before it wears off. Losing two or more of the battles for the rocket in a TS game can quickly lead to the other team having 10-15+ kill lead on you. On occasion in 2v2 games if a team loses the fight for the camo its advisable to wait for the opponents cloak to wear off then engage in the fight for the next set of powerups (in 4v4 hiding like this isn’t advisable).

I love the chess match that takes place between two good teams as they try to position themselves to grab the next set of power ups. In my opinion the timing of power ups in this version of Halo is one of the reasons why I rank it as the most competitive Halo version to date – the later Halo versions have watered down this aspect of the game. One of the worst things you can do is die around 5-10 seconds before one of the power ups respawns as it all but guarantees the other team will grab them as you will likely respawn away from where they are located.

At the start of every game I recommend you start a timer right as the game begins to track the respawns of the power ups. There are even apps on the app store if you are using a smart phone that you can find free of charge that will not only track the different respawn times of the items on the different maps but will also start an audio countdown 10 seconds before they respawn. The audio reminder is very helpful as you no longer need to divert your eyes off the screen to check on the timer and can instead focus 100% of your attention on the game. If you want to use an app for your smart phone, I recommend the “Timer for Halo 1 MCC Collection” by Noah Evans. It’s free, well designed, and seems to be the universal phone app timer I see used at every Halo LAN I attend.