Supply and Demand are the tools of the Merchant King. Better understanding these in Bannerlord will help you become the next Musa of Mali.

This guide will present an overview of resource flow in Mount and Blade Bannerlord 2 as of early access release. It will also go into how to use this to trade using your party, with a focus on early to mid game, and the implications this has on building workshops and caravans.

Supply and Demand are the tools of the Merchant King. Better understanding these in Bannerlord will help you become the next Musa of Mali.

This guide will present an overview of resource flow in Mount and Blade Bannerlord 2 as of early access release. It will also go into how to use this to trade using your party, with a focus on early to mid game, and the implications this has on building workshops and caravans.

This is my first guide, and is by no means extensively tested or perfect. It is based on my observation from trading different goods around Calradia and creating a large horde of wealth early game.

The game contains 3 categories of items in regards to trading. All items are produced at a town or city, with the exception of weapons, armour, and ammunition which can all only be bought, plundered, or sometimes crafted. Each town specializes in one base item, which can sometimes have related items (i.e. towns that raise cows also produce butter and cheese). The item categories are:

These are items that are often plundered off the battlefield. It consists of all weapons, armour, and ammunition. Mounts and food not included.

These are often best used to upgrade your player and companions and then either sell at the nearest town or in the case of weapons smelt at the smith’s for crafting resources.

Livestock includes all animals and mounts.

Livestock is important in that they have a couple different purposes and usually create related goods through their raising.

This includes food items, as well as purely trade items that may boost certain town and city stats (need to test).

Goods are important as they are your primary source of income, and their supply and demand are more impacted by natural abundance than other items.

It is important to understand the good chain, so as to know where goods will be abundant or scarce. See Chart below. Good chains are speculative and not yet proven*. Any marked with a question mark may be outputs or not.

Each area is abundant in certain goods and scarce in others. By understanding where goods originate from you can understand where they will sell cheap and where they will demand a hefty price, it’s all about arbitrage. Remember too, their are other merchants and caravans, as such, to get the highest price for your goods you have to go far from their destination of origin as many caravans help spread the goods further outward. Another option is to go where they are in exceeding demand, often large prosperous manufacturing sectors looking for inputs or kingdoms at war.

The game will highlight prices in green that are cheap and highlight prices in red that are expensive. This is important to note as generally when you buy you want prices to be green, and when you sell you want prices to be red. It can be confusing as when you go to sell it shows a red price, this means it is more expensive not that your profit will be negative.

The trader skill tree also has perks that say it will show your average price and profit and loss. 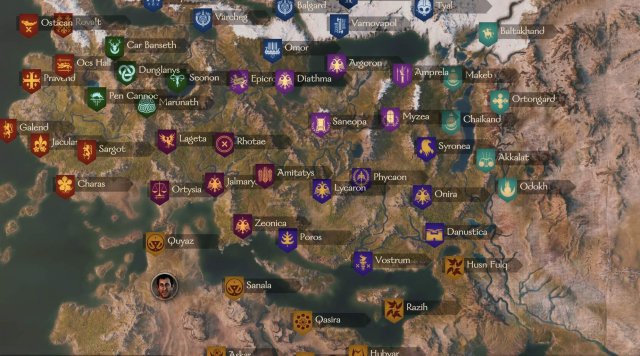 The above map shows Calradia’s Kingdoms at the start of the campaign. Each roughly encompasses a different environmental region with different regions having different natural resources.

Each one shares similar characteristics to their historic influence. As such, they share similar natural resources as their historic counterparts, and similar trade patterns. Their behaviour and differing preferences may also lead to changes in goods supplied and demanded. A perfect example is the lack of quality horses in Vlandia yet a heavy reliance on heavy mounted knights. Create a large demand for quality horses.

They have very cheap hogs, however, cattle can be very expensive. They have less manufacturing capabilities and thus their prices are low for most Base Goods and high for most Manufactured Goods. Their wine and oil are often very cheap in some more mediterranean locations. Their military favours heavy mounted knights and thus has a high demand for war horses, particularly desert horses.

Furs, Furs, Furs, and some flax and linen. Terrific for cheap furs which are in large demand the more south you go and the harsher the land you find yourself in (looking at you Aserai). Similar conditions as Battanians and Vlandians, with some demand for wine, dates, pottery, and olives.

Lots of herding animals in the far eastern regions past the mountains. Very good for hides, cows, sheep, and meat. Some areas demand salt. Other really like olives and wine. Iron ores are fairly abundant and tools appear to be quite cheap in the South Eastern parts. Steppe horses can sometimes command a decent price in lands with few available mounts (Cough* Battanians). Some good sources of linen and pottery. Sometimes demands silver ores and leather. Almost always wants some amount of furs for their stylish coats.

Dates, grains, salt, horses, and fish. That is about all they have, for the trade-off of having it all! Sometimes oil can also be quite cheap. Manufactured goods seem to demand high to medium prices depending on recent caravan activity. Generally most food items are cheap, however, items like hardwood and iron ores can garner profits in a land with no trees. If you ever wanted to be a horse merchant this is the place to gather your stock. Can re-sell to horse hungry Vlandians for easily double the price.

The Empire has a lot of goods and similarities in common, with less pronounced difference between the three. They have a mixed bag of Base Goods and Manufactured Goods demand and supply. Often their territories have the most volatility in ownership. As such, you can profit off of short-term demand spikes while passing through to faraway lands. Overall, there is more city by city variance and thus opportunities for arbitrage at shorter ranges but with generally less consistency and magnitude (unless you get lucky and can sell to a city after a siege :)).

I suggest experimenting and finding your preferred trade route. It can be fun to role-play and run with the lore of the game, specializing in certain products or trade niches. However, some diversification is always healthy for profits. This is doubly true if you are trading in food, as it can be slowly eaten at by your soldiers, although it does not seem to go bad. Speaking of soldiers, as of March 2020, it is fairly easy to maintain a personal party of at least 25-35 men. You barely, if at all, need to level them up to keep most hostile parties at bay (actually fighting them is a different matter). Keeping them low level is very advantageous in the beginning as you are often operating on a shoe string budget and don’t have the ability to be footing large monthly expenditures between origin and destination. A final note, it can be worthwhile to buy cheap horses and mules to increase your speed, item turnover, and thus profits. It is also a good idea to become a part time horse merchant, as horse carry your people and items, often valuable, and walk themselves.

These are a prefect guide to understanding where supply and demand will be. I recommend you draw your own trade routes and try them out using these as a guide. Below each map are simple directions to travel to make profit.

I have tried to compare relative goods, and ensure visual clarity, I apologize for my poor image editing skills.

If anyone has any interest in my data files listing villages, towns, and their resoruces let me know. I’ll look for a way to share them wiht you and others online. 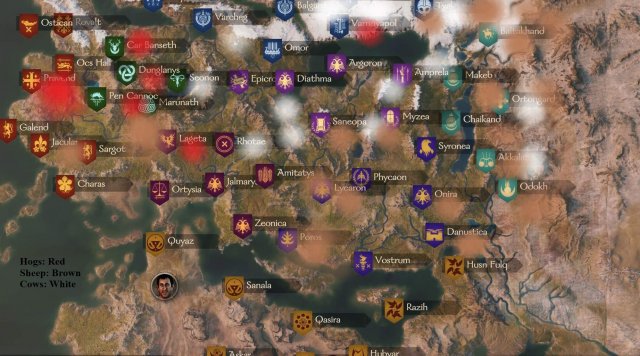 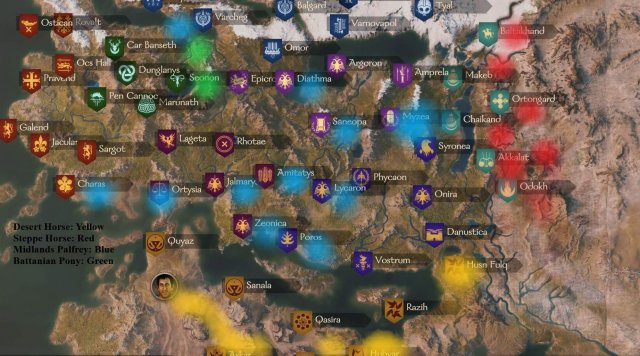 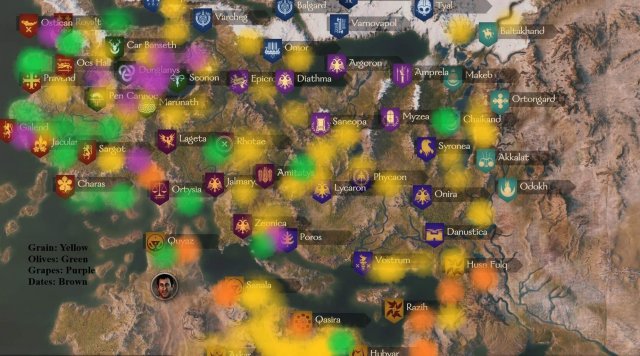 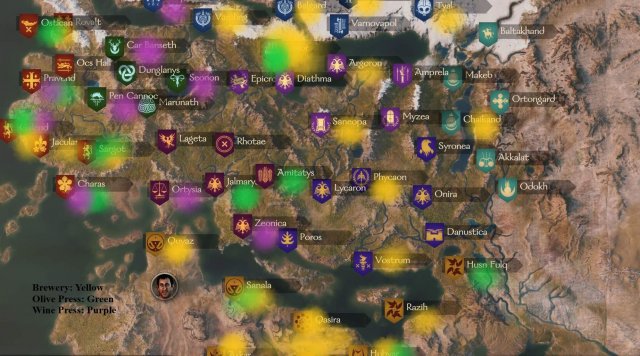 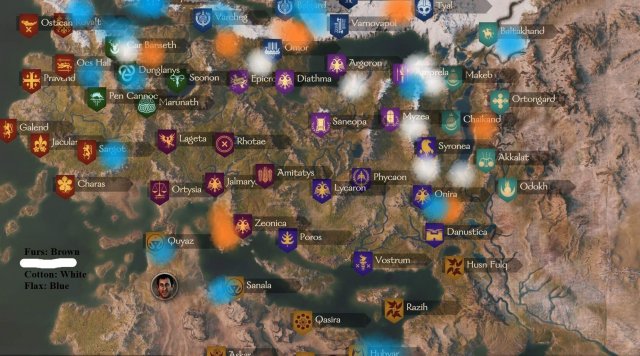 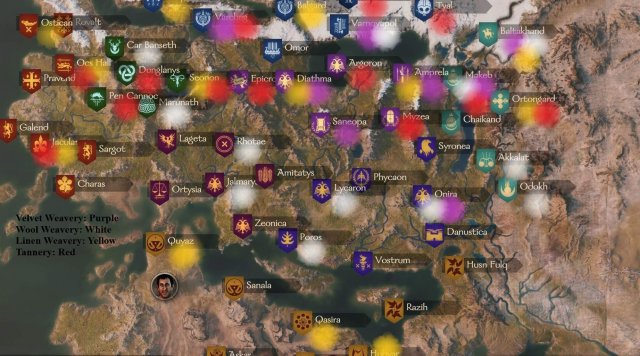 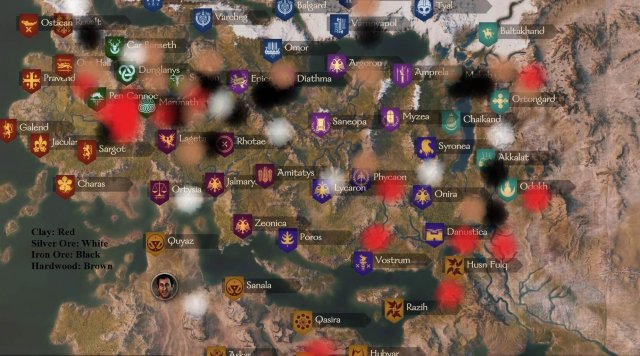 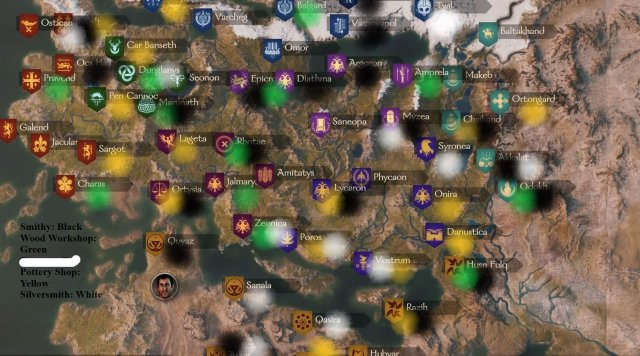 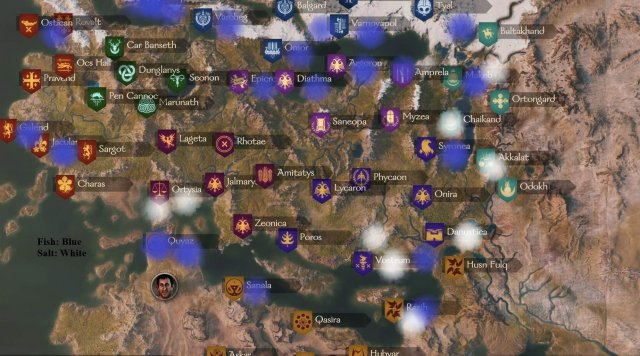 Caravans are likely best started at the edge of the map, so that they are more likely to travel to farther lands and experience more extreme changes in environment and resources.

Workshops should be placed in territories where input goods are cheap and available. Greater risk can be achieved by placing in territories that have fewer input goods (but still some) and have a lack in manufacturing for that good, monopoly opportunities :). An example could be manufacturing Jewelry in the Western edge of the continent, however, this is untested and may require you to buy silver and transport it there. Considering their may be caps on workshop profit this may further reduce the gains from taking risk and opening up manufacturing in capital low areas.Another thing to consider is competition. Each town has 1-3 workshop slots, you should pay attention to what is being produced there and if it will compete with your workshop or allow you to monopolize. AS well, you may be able to setup workshops that benefit your trade routes and allow you to more easily connect certain items from producers, to makers, to consumers.

I have yet to have much experience with fiefdoms, so I cannot say much. However, where you own fiefdoms it may be advantageous to also own manufacturing. It might also be in your interest to ensure a healthy good supply into your towns and cities to promote development and prosperity. Especially food, keep their stomach full and they will serve.

As a kingdom you make want to focus on conquering provinces with goods that you need, or towns that contains 3 workshops slots and will thus be able to produce more than towns with only one or two. This may heavily influence the success of certain clans and nations.

Some routes I have found useful have been to trade between western Calradia (Vlandians, Battanians, and Western Empire) and the Aserai. You can sell Aserai horses/desert horses for great bank, and western Calradia has many low value goods that Aserai cannot produce like grapes, hardwood, wine, olives, furs, and hogs.

Another is travelling between Eastern Aserai, The Khanate lands, the Empire, and the Sturgian north. You can buys furs in the north and sell them in the south for double or triple profit. You can then buy horses, oil, linen, tools, pottery, etc. along many stops and trade with Empire, the Khanate, and sometime head more west to sell off livestock like cows form the Steppes and other products you pick up for cheap along the way.

A few short tips that can make winning tournaments much easier. How to Win Tournaments Quick Tips In 1v1v1v1 fights you can maneuver around so that your enemies fight each […]

In this guide you can find all information regarding Governors. ContentsGovernors GuideIntroductionGovernor’s CultureTraitsSkills Governors Guide Introduction The land of Calradia is extremely difficult to tame and maintain, however you don’t […]