Want to slay that nasty tome and his cycloptic horde? Want some better quality potions? This guide will explain all!

Codexus is located in this room in the gameworld: 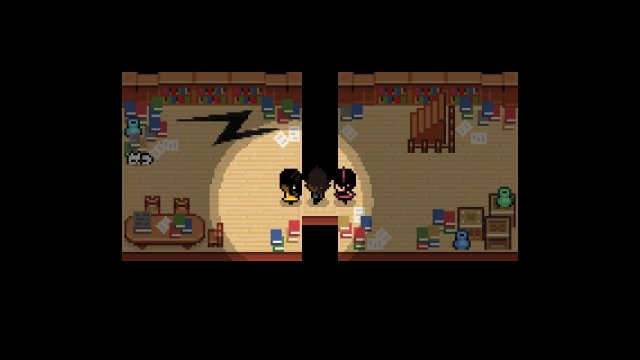 You will visit this room when recruiting… oh crap, what’s her name again? You know, the girl in the mirror, with the cat? Why do they all have to have such hard names…

He can only be fought after a cutscene in chapter 8, in which an earthquake knocks him off the bookshelf and makes that ‘thar hole.

You will, before fighting Codexus, need to find the alchemy receipie book, hence the reason why both are being explained in this guide.

The book is found in the archives. (At least I think it’s called that? It’s the one with ghosts and the purple walls; there’s like three dang places in this game that have books everywhere; cut me some slack) 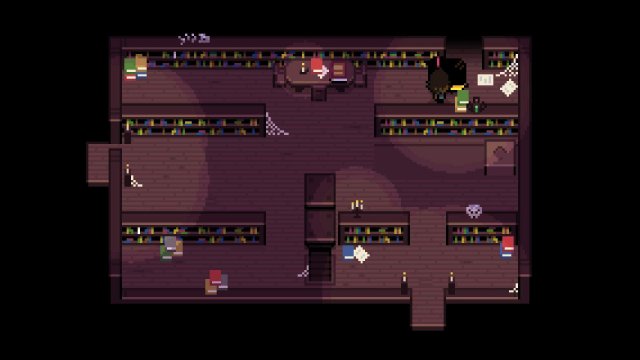 It’s behind a bookshelf that makes the wall appear solid. You’ll need to click “A” against it to walk through. I think it’s this room, but if it’s not, then it’s not like you have 100’s of rooms to check so just just click “A” against the bookcases on the back walls of each room. There’s some cool treasure and an optional mini-boss against “Attack in the box” (basically a mimic, watch out for that prick) to be found in the rooms that don’t contain it, so just go nuts until you find that dang thing.

Once you found the book, take it to the alchemy lady. I know, I know, another name I can’t remember. I’m crap with names; that is my burden. Anyway, she’ll be chilling here by this point in the story: 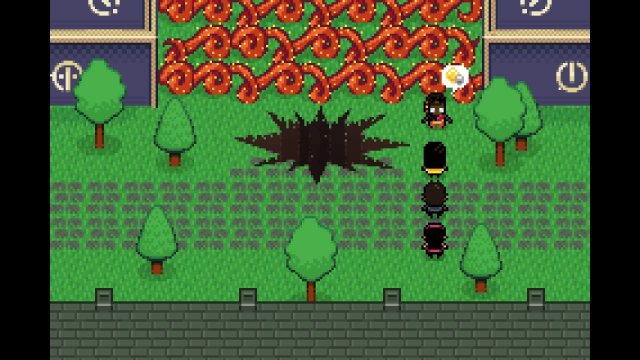 You’ll need to buy eight of these bombs from her: 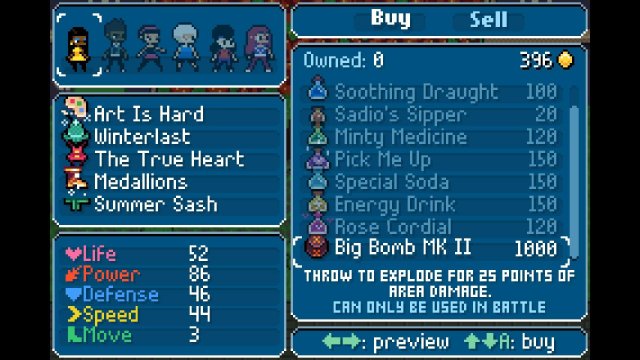 Sell old equipment to afford it if you haven’t got the dosh.

As for the fight itself, you’ll want to bring Paint Enby, Book Boy and The Electric Lesbian Orchestra. Their skills at level 21 (the rough level you’ll want to be) will be sufficient. Outfit Book Boy with equipment such that he has max defence and a move score of 6 (5 will do in a pinch), give ELO your best damage and speed gear and make Paint Enby have as high stats as possible without having any major weaknesses.

Aside from that, you want to have a backpack stocked with plenty of healing items, especially those that remove statues effects, but not super many that bring back the dead. If people start dropping in this fight, it’s already over.

Codexus will chill in the far left of the battlefield the entire fight. He remains in the same column, second from the left, almost all of the time, hopping up and down a row now and again to hit your team from far away.

You want to close the distance, but every time somebody gets close enough, that darn book just throws them as far right as possible with “black hole”. How do you beat this tactic? By using Book Boy’s high mobility to set sigil traps in Codexus’s hangout zone. He needs to be in the same row as your witches to hit them with black hole and he often chooses to do this over other, smarter strategies, so you can take advantage of his predictable movement to rob him of turns and sneak in chip damage with sigil traps. Same deal with Paint Enby’s Sentinel, if you can get zir close enough.

While moving from right to left, each team member has moves that can be used to fill in gaps. Book boy can give movement buffs, Paint Enby can apply regen (You’ll want to do this fairly often, the damage here can get pretty crazy) and ELO can occasionally apply speed buffs. However, ELO is better suited for a far different purpose: Sniper.

ELO’s beam attack can hit from one side of the battlefield all the way to the other. She and she alone can hang back and hit Codexus, his fireballs and his minions from relative safety on the right side of the battlefield. It’s also worth noting that this means she can stand far away from other team members to make Codexus less likely to use his irritating “Acid” attack, which applies poison no matter how good you are at timing your blocks.

Just make sure nobody is standing with a one tile gap either horizontally or vertically from another teammate whenever Codexus is about to act, or if that’s impossible, make sure that somebody else is close enough to Codexus that he’ll use Black Hole instead, giving you a turn to move out of harm’s way.

The REAL threat in this fight is Codexus’s minions. He’ll summon four waves of four through the fight, those being worms, bees, training dummies and then a medley of all three near the end. Every time he summons, stop moving to the right until you’ve killed at least three of his minions. They have very high HP and defence.

Fortunately, each of them will die if they are hit with at least two MK 2 Bombs, and doubly fortunately, they spawn in with three of them in a three by three grid. Even if it means hitting your own team with bombs, use them immediately, 2 per wave of 4. Don’t bother trying to hit Codexus himself with any bombs, it’s a waste of time.

If you do all this correctly, then you’ll have a slow fight of attrition to win once the minions die. You can afford to slowly kill one minion alongside Codexus himself, but don’t ignore it and go for the boss. If any of the minions from the last wave are still alive when Codexus spawns the next wave, that’s gonna be real bad for you my buddy.

Also, you might still have access to a one time use item that take a quarter of some enemy’s HP away? Yeah, DON’T use that on Codexus if any minions are still around. His spawn thresholds are HP percentage based, and it’ll make him spawn a new wave immediately.

Hopefully this guide will help you win this paltry pool of loot that doesn’t come close to recouping the gold those bombs cost you: 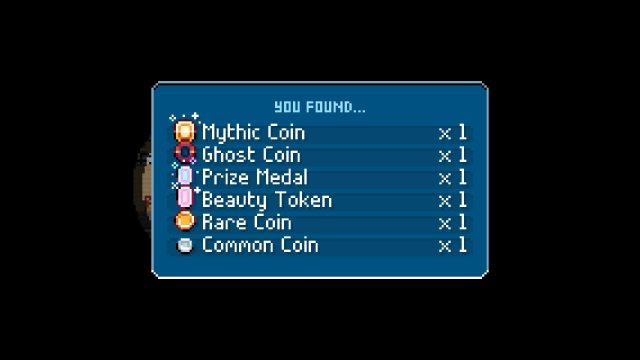 Cheers, and have a good day, y’all.

Ikenfell – List of All Gem Locations (Rare, Sparkly and Shiny)