This guide will tell you the location of (as many possible) infinite farming locations, with quite detailed info on the enemies you are farming and pictures of the object and spot on the map it is located!

Other West of Loathing Guides:

The Eastern part of the West

This is the area east of the mountains.

Note: I cannot put the max/min amount of atk they do as my muscle, mysticality, and moxie are too damn high for me to even take damage lmaooooo.

Snake Spring: A spring that will spawn a infinite amount of snakes with between 38-48 HP and 15 xp per kill.
Location: East of Dynamite Dan (which is east of butterfield ranch which is north-east of the railroad camp). 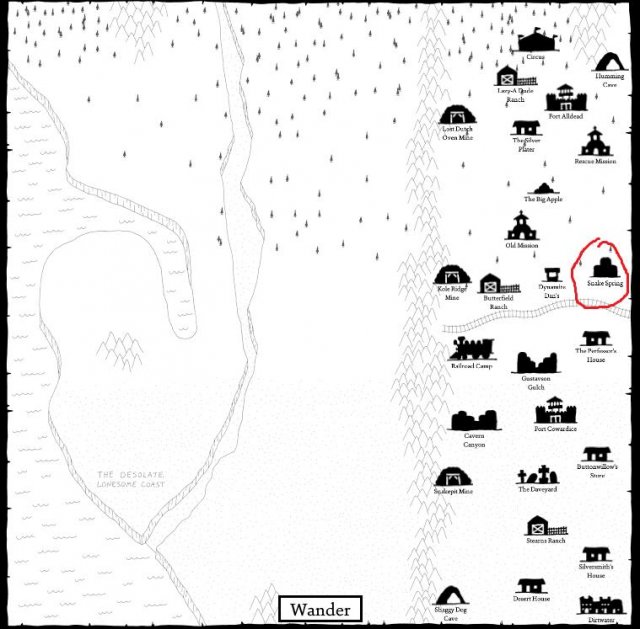 Very overpowered, even more so for snake oilers! they are garunteed to drop one of these things per kill: A snake spleen, liver, or bladder. and some venom/medicine if you are a snake oiler obviously. 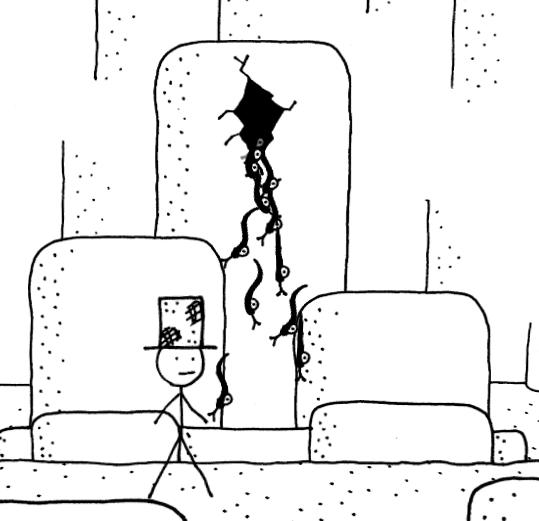 “HOLY S**T! A SPRING THAT SPOUTS OUT SNAKES?” – said everyone who ever saw this

The Daveyard: A graveyard for all teh Daves that ever died in the eastern part of the west! (that had their body recovered and buried). Its location is just north of stearns ranch, and also the location will be given to you by the goblin chef at the dirtwater tavern kitchen in one of his final quests. 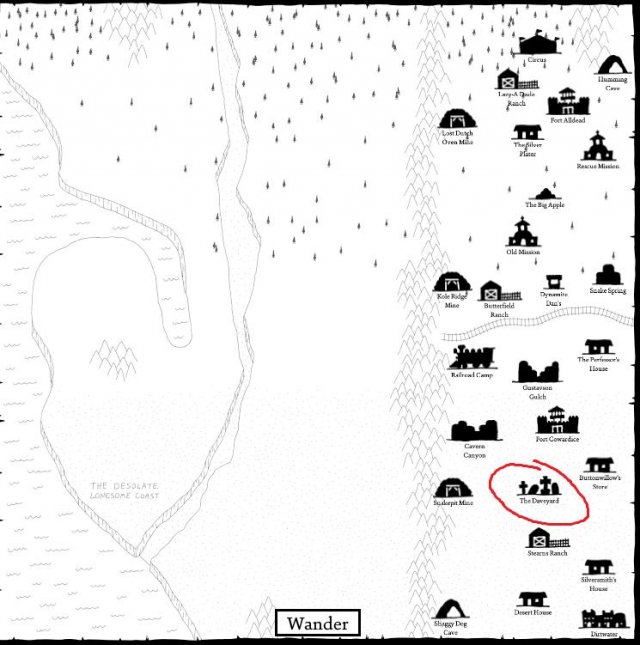 There are skeletons that spawn here with hp between 19-24 and 10 xp per kill.
They drop one of these items (garunteed) : A gold tooth, a bone, a handful of teeth, some skeleton scraps.
Its a good place for farming meat since gold teeth go for 15 when you sell them. 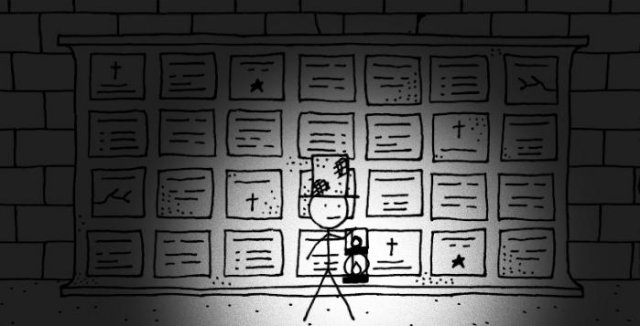 Butterfield ranch: It has a infinite field of unguliths (cow statues made of stone) that will start out with 1 on the battefield, and every couple times you go into it it will add another ungulith until it has 4, which it will cap out on. Location: 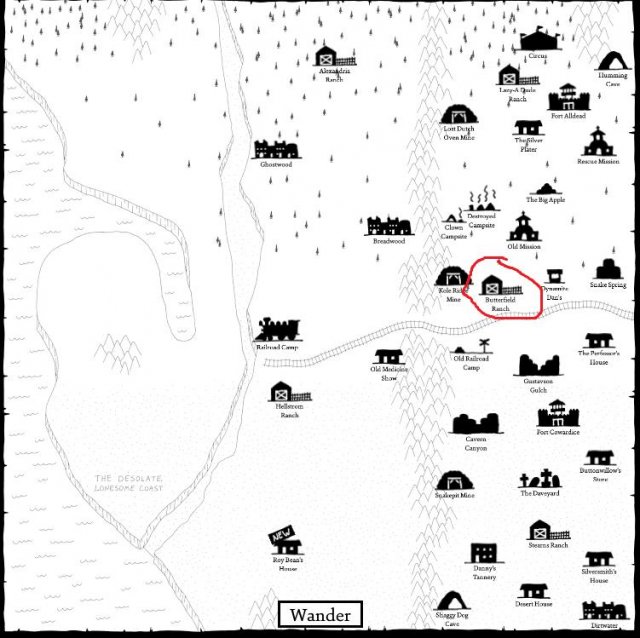 Unguliths have between 37-47 HP and drop 15 XP each. They can drop one of the following:
Menuode geode, cows eye (100 meat per sell gem thingy), and brass bull rings.
Also- if you choose susie as your pardner she can rank up by killing enough of the cows/unguliths. 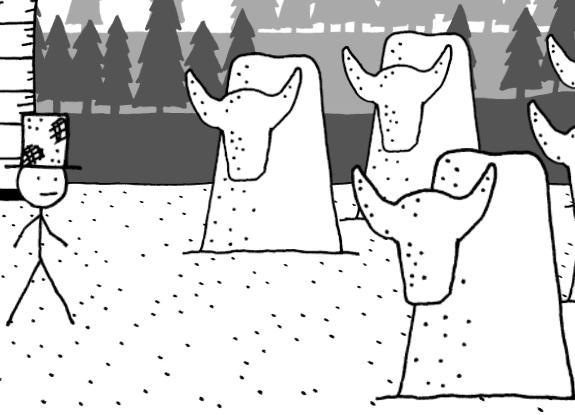 This♥♥♥♥♥♥reminds me of them weeping angels…

Also if i spelled anything correctly, im sorry that im not sorry because you still understand what im saying.

The Western part of the West

This is the mid-late game area west of the mountains.

Soupstock lode: It has a bunch of veins for soup which you will need to collecct for the town of bread-wood as one of the requests and a broken elevator thing- assuming you know how to pick locks theres a toolbox with a item you need to fix the elevator (a wrench), use it on the first option of the elevator 4 times, then 2 times for the second, and six times for the 3rd. You then have access to the rest of soup and the pit of infinite snakes that use soup combat. Location: 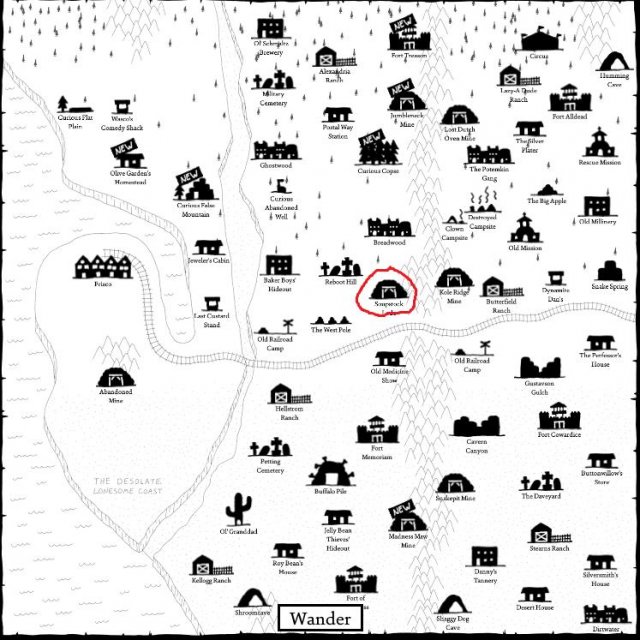 They have these stats & drops: 64-74 Hp, and a reward of 26.666 xp each. there are three different snakes that can appear corresponding with their stat – muscle, mysticality, and moxie. They can drop the usual snake drops, spleens, livers, and bladders, yet they can also drop stewed snakes, which give 20% heat resistance for rest of day and have a 25 meat sell price.

Hellstrom ranch; This place is where the cows came home from, a literal portal to hell exists. You ring the bell and it spawns a hellcow- however every couple of rounds it increases the amount of hellcows by one until it caps at four. They average around 120 hp and will give a whopping 40 xp per kill! They can drop a roasted cow tonge, meat, tainted beef-steaks, brass bull rings, infernal souls, and tainted milk. (you can churn it into butter) There are also chances of encountering floating cow skulls instead of just a regular hellcow, with about the same avg HP. Location: 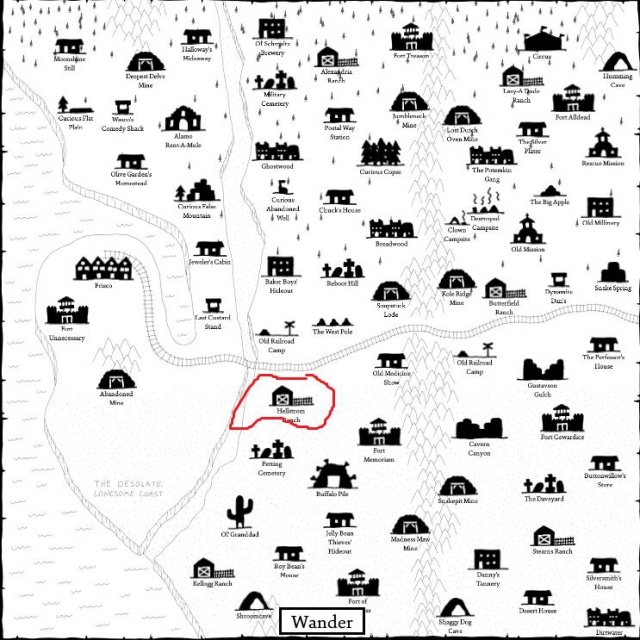 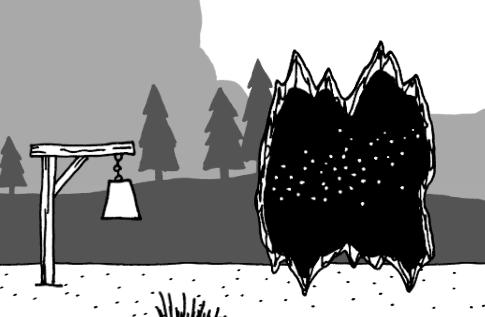 A step-by-step guide to the WANTED: Alive achievement and filling the Dirtwater jail. Other West of Loathing Guides: How to Win Fort Memoriam Battles. Abandoned Pickle Factory. EXP & Item […]

Did you go through the dream sequence when you started to go into the Pickle factory, and just skimmed everything thinking it wasn’t going to be important, only to find […]