What’s a power connector? Can I lick the Atomic Pile? Why are my screens giving me weird symbols? All of this and more are covered in this guide to the components of your Pod!

Note: Power components (unless otherwise said) will electrocute you when touched if the system is on. Turn off system before touching these components, or you’ll be fried on the spot! 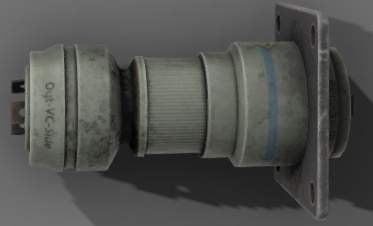 Damage will cause power to be lower then required or very unstable delivery, potentially causing damage if no fuse/transformer is present.

Tip: During Electro-storms, turn off the systems and remove the power connectors from required systems, then use the internal battery power and turn the system back on. This will allow you to run these systems without risk of them being fried by lightning! Put this back in after the storm has passed.

The Power Transformer (and also Large Power Transformer) is a small metal component that prevents electrical damage to a system by turning excess power into heat. It acts slower then a fuse but is better for long-term power fluctuations.

Excessive damage will cause the transformer to stop sending power.

Tip: If a system won’t turn on, check the power transformer first!

Fun fact: The colored wires on the transformer all have a unique use that match a real life’s transformer meaning.

The Fuse (and also High Capacity Fuse) is a simple component that turns off a system’s power if the power suddenly spikes too high above its set threshold. It acts faster then a transformer but is better for sudden power spikes above it’s threshold.

Damage will cause the threshold to become lower or higher, causing sudden shutoffs.

Tip: You do not need to replace a fuse after it is set off, just turn the system back on.

Fun fact: According to the in-game texture, these are made on “Jupiter Station”, theoretically meaning these are made in space in a station orbiting Jupiter! 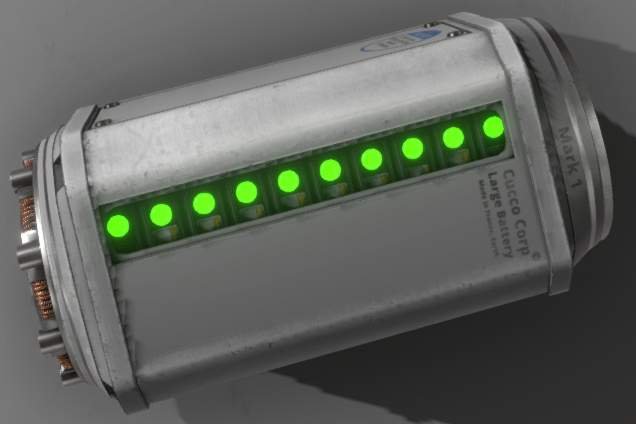 The Battery (Large Battery) is a complex component that stores emergency power for a system. Systems will automatically use power from a battery if the Main Generator is off or the Power Connector is removed. The green lights show how much power is in the battery. Less lights and a more red color mean less power. Batteries can be removed without turning a system off.

Damage to batteries will lower their overall power capacity and increase charging times.

Tip: Remove batteries from systems ASAP. Batteries are very expensive to repair and tend to get damaged if sitting in a system from asteroids and electro-storms. Only use batteries in a emergency!

Fun Fact: These are Nickle Cadmium type batteries made in France by “Cucco Corp”.

These parts process or display data to screens or systems in some way. 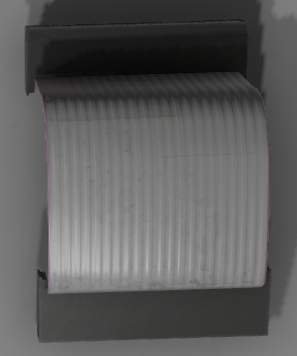 A Data Cable is a small simple component that is a small ribbon cable that has a few functions. In systems with CRT monitors it allows for the display of system info, and all systems use it to connect to the Main Computer located just above the airlock for diagnostic readouts.

Caution should be used when handling these, as it is a small component and may be lost or misplaced easily, especially in a chaotic emergency situation.

Damage causes system to behave in a chaotic manner, which may cause other issues to happen. Damage also prevents the proper readout of diagnostic codes, corrupting or even flat out removing them.

However, it will corrupt the CRT display in some way, either turning the words to jibberish, making the readout fluctuate wildly, or making it into squares, making it usually quick to notice.

A Processor is a complex component that allows systems that require it to control itself (to a degree). Processors count as a Power Component and trying to touch one while a system is on will electrolute you! Caution should be taken when handling Processors!

Damage will cause random, chaotic behavior to occur, making it hard to distinguish from a Data Cable issue. However, if you see chaotic behavior and if you do not see any corruption, it is a Processor causing the issue. 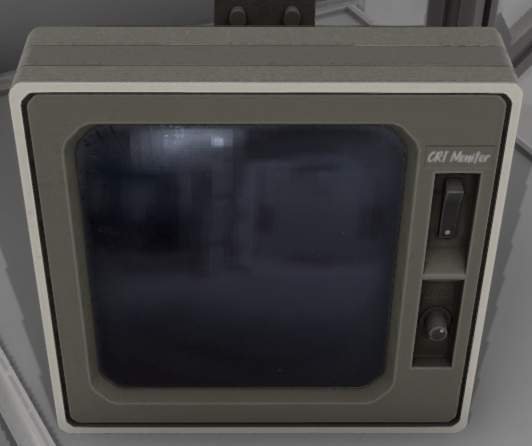 A relic of the past, the CRT Monitor is a display component that displays data on it. Each CRT has two display states: Showing current system info, and showing current system errors. If the Data Cable and Main computer are both operational and in good condition, the error screen will display a translated error message (like ON_BATTERY or BAD_DATA) instead of displaying the raw error code (like 2NOA or 01N2). There is also a small version currently used for the Repair Station’s door readout, which acts the same way.

Damage will cause the monitor to turn itself off or cause visual glitches on the screen.

Fun fact: CRT stands for “Cathode Ray-Tube” which uses a electron gun to display points of light on a phosphorescent screen.

These parts help communicate to you when something is broken when you don’t have a working CRT… or are not paying attention. 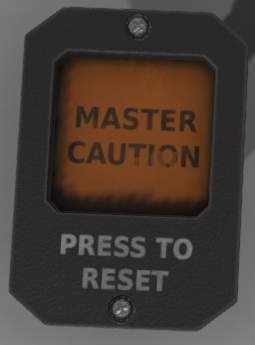 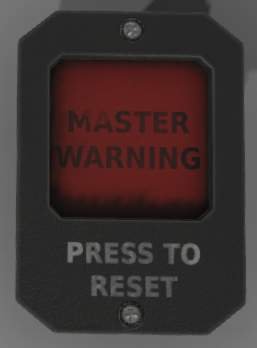 The Caution and Warning Lights are both small components meant to visually and brightly signal to you that there is a problem with a part when the CRT monitor is not working or you did not notice a problem.

The Caution one generally goes off if there is minor to moderate damage to a component or a easy to fix issue, and the Warning one generally goes off when there is major damage to a component or a complicated issue. Interacting with them will turn off the warning. Use this when you have knowingly fixed the issue and the light has not gone off yet.

Damage will cause these to go off randomly or not go off when there is a actual issue.

The Buzzer is a very small component that creates a loud sound when a Caution/Warning light goes off. Each system has one and each has a unique noise to help identify it. It is very small, so take caution to not lose them.

Damage will cause it to go off randomly or not go off when there is a actual issue.

These parts are used in the Main Generator. 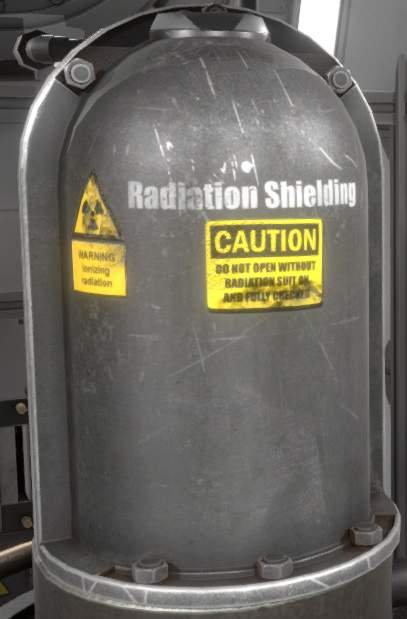 You should never take the shielding off under any circumstances, as radiation can severely affect you and outright kill you on the spot.

No seriously, i mean it, don’t take the shielding off under any reason at all.

Fun fact: The reason why Lead is used in Radiation shielding is that lead is a super heavy element that radiation cannot as easily pierce and gets absorbed easier by Lead. Several centimeters of Lead are generally used for the best result. The thickness in-game is actually quite a bit thicker then such, probably being upwards of 10 centimeters thick or more, probably since the Atomic Pile uses Uranium-235 as a fission product to generate the heat and power of the Pod. 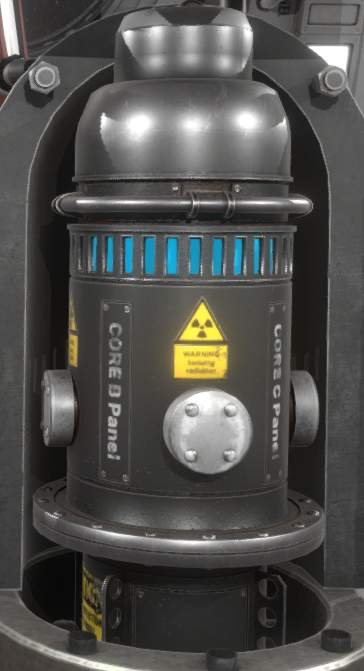 The heart of your Pod, and the only reason why you haven’t died of a few different ways, the Atomic Pile is a small-scale nuclear “cold” fission reactor that uses the fission of Uranium-235 to produce heat and power for the Pod.

If you are able to see it without any sort of protection or protection that isn’t good enough, you may notice flashes of light in your vision. This is radiation hitting the back of your eyes as it pierces through your body, and as you can expect that is not very healthy for one’s health.

Although very difficult, the Atomic Pile can become damaged. If this happens, the power output will decrease and the shielding on it may not be enough to stop the leaking of radiation into the Pod.

In normal use, the Pile sits around 16kW (0.016 mW) at around 97C. The highest output I was able to get out of the pile without using environmental effects was 38kW (0.038 mW) at 226C. Note that this is impossible to achieve in-game normally, and was done using the Sandbox mode.

These are components that don’t quite fit into any other category. 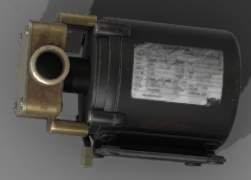 The Pump is a complex component that uses electricity to forcefully move air or liquid into or out of a system, generally to fill or pull from a Tank or atmosphere of the Pod.

Damage will cause less resources then normal to be moved around, which slows down systems, sometimes dramatically.

Fun fact: The data sheet on the side of the pump fully explains the details of it, which will be listed here. These details do not affect game play at all, it’s just flavor text. 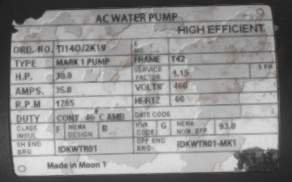 The Filter is a component that filters particulates out of the air for systems to use. It jams up over time, requiring someone to occasionally blow the dust off or to clean the filter, making it tedious to maintain over time.

Damage (or dust) will make the filter send reduced resources through it.

The Switch is a simple components that allows you to turn a system on and off, and also displays if a system is currently on or off. it may be required sometimes to press the button twice to fully start a system up if it is not responding correctly.

Damage will cause the switch to sometimes turn itself off or not respond when pressed, sometimes requiring multiple presses just to count as a single press that works. 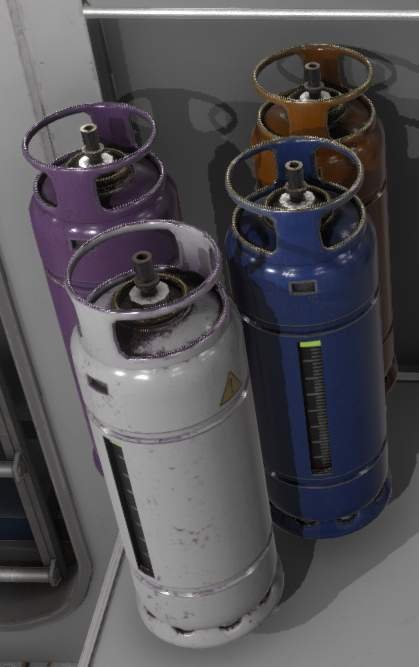 Tanks are containers of a gas or liquid, usually pressurized.

Tanks currently take no damage. Tanks can be held and opened in your hands to release pressure quickly, but the tank will fly out of your hands!

There are currently four tanks used in-game right now, and they are: