This is for players who already know how to get a plane off the ground.

Here you’ll see how to make your plane more stable and more controllable, along with what causes instability.

The goal is, that by the end of this guide, you’ll be able to improve your plane-building and know why certain things work and certain things don’t. I’ll also explain some basic concepts you need to understand when building a plane.

You can read pretty much any section by itself, so you can pick and choose what to read, since this is a pretty long guide.

The official besiege tutorial plane inspired me to make this guide, seeing how it can barely get off the ground and can’t be controlled.

The most iconic and common method of propulsion are propellers, so I’ll dedicate the coming bits to them. While you can also use nives and rockets, the only other method of propulsion viable in vanilla Besiege are steam cannons. There really isn’t much to say about them, except they don’t apply torque to the plane, and that they can be made hell of a lot more powerful by placing multiple in the same spot, and using the copy-paste bug to copy and paste the x4 power setting from the shrapnel cannon into them.

There are many different things that can cause it, but in this section, I’ll mostly talk about what always needs to be addressed in propeller-based planes.

If we place a wheel on a pinned block, the wheel will spin, and that’s it. However, planes are not pinned blocks and they are freely rotating, so it’s important to understand how torque works.

If we place that same wheel on a freely rotating object, the wheel will not rotate as fast as before, but most notably, the object will begin to rotate in the direction opposite to that of the wheel. Planes that use propellers will experience this, and there are a few ways to reduce this torque that would otherwise make the plane roll uncontrollably. 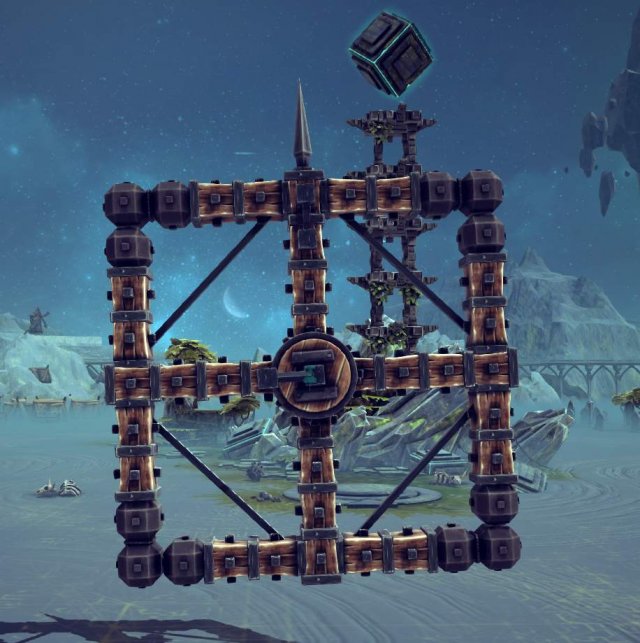 In this image, even though the wheel made a full rotation, the object behind it barely even tilted.

Countering torque with even numbers of propellers

Planes with an even number of propellers can have propellers rotating in opposite directions, applying the same amount of torque to the wings in opposite directions. The two torques will ideally cancel each other out. Depending on how far from the center this propellers are, and how large and heavy they are, they can bend the wings upwards or downwards, shifting the center of mass, and making the plane pitch up or down. Because of this, it’s important to properly brace your plane. 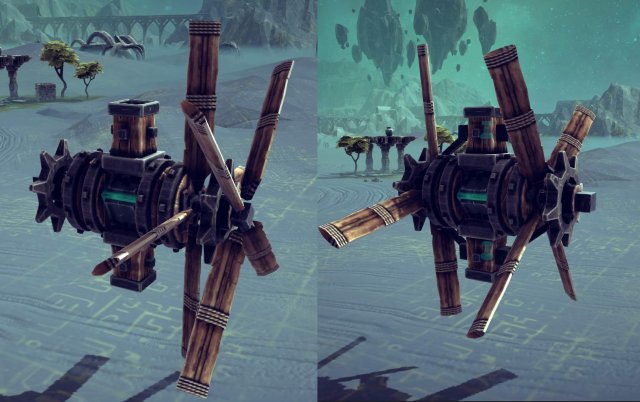 These two images are of a “single” propeller which applies no torque to the plane. It does this by actually being two propellers on the same axis, countering each other’s torque. Its center piece is freely rotating and attached to hinges. This is because there’s always in imbalance of torque, meaning some would otherwise be applied to the plane. The hinges make sure there’s never any torque being applied, at the expense of a very small amount of speed. The design on the right is made for higher speeds.

At high RPM, due to huge acceleration, the braces of the design on the left will break. The acceleration option in Besiege only seems to have a linear effect on the speed when there’s no load on the wheels. When there is load, speed experiences an exponential increase, effectively serving more as response delay than actual acceleration reduction. 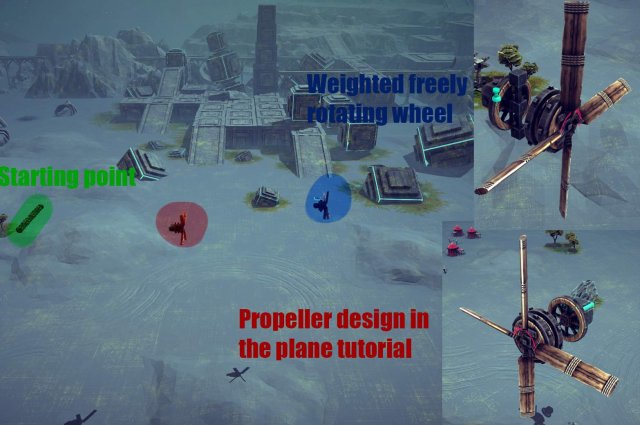 Since the rotation speed of the propeller is proportional to the moment of inertia of the unpowered wheel, increasing it by adding braces will make the propeller much better, as can be seen on the image above.

This is really an extra feature for your plane and is in no way a must have.

You don’t really need to vary the amount of propulsion between more than 2-3 speed settings, and those can easily be applied by just changing the controls, and if you really want to, you can improve speed switching with automation blocks. If you really want to be able to switch to any speed setting, you will have to change more than just the controls of your propellers.

The pictures below are that of a single propeller that can change the angle of attack of propeller blades, a control unit for a plane with three speed settings, and a variable steam cannon thruster. 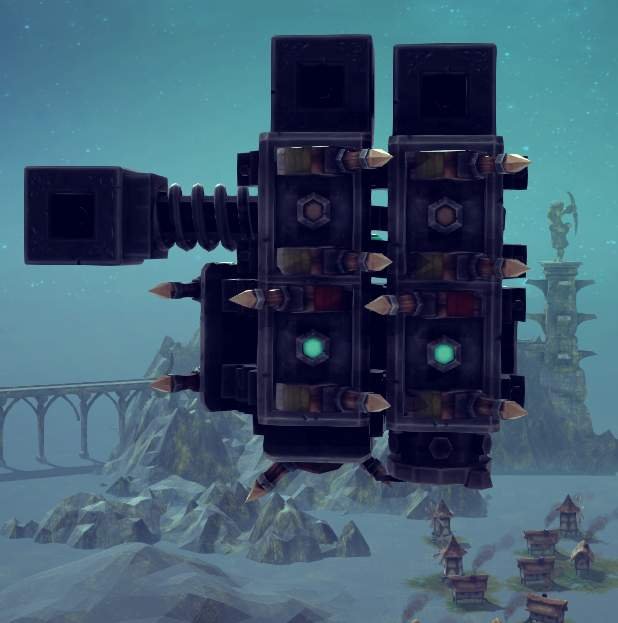 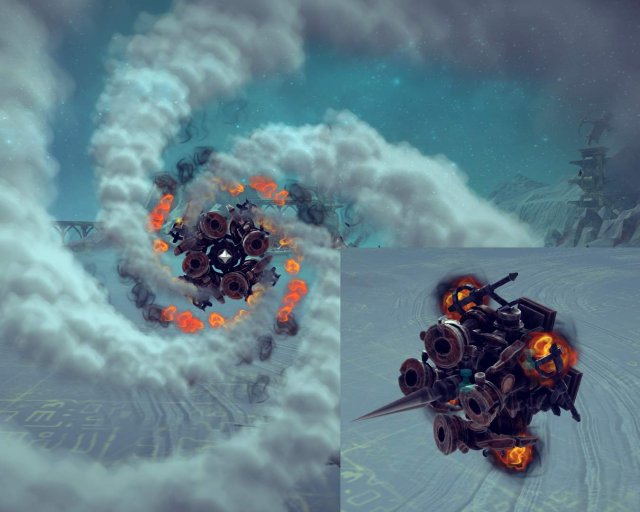 Wing Panels and Сauses of Instability

What do wing panels do

Other than providing lift, they make the plane a lot more stable and easily controllable. They largely dampen small vibrations and other things that would cause shift in direction, but much more importantly, they heavily reduce the turning acceleration the plane would otherwise have. Drag is proportional to the square of speed, making it so you can have quickly responding controls when using panels, that have relatively constant and predictable turning.

The center of lift and mass

The center of mass is usually going to be in the front half of the plane, which makes sense, because the front part has the propellers, the wings, most of the bracing…

The center of lift, however, will be behind the center of mass because almost the entire tail of the plane contributes to lift. In other words, the lift/mass ratio of the tail is higher than that of the front.

This will have no effect on your plane when flying it in 0G, because there is no gravitational pull, and no need for lift to be a factor most of the time. However, with gravity, you always have two vectors pulling up and down, so you get torque which makes the plane pitch downwards.

Landing gear is fairly simple, so I’ll just say that if you want to make it retractable, add an altitude sensor which will raise or lower it automatically. 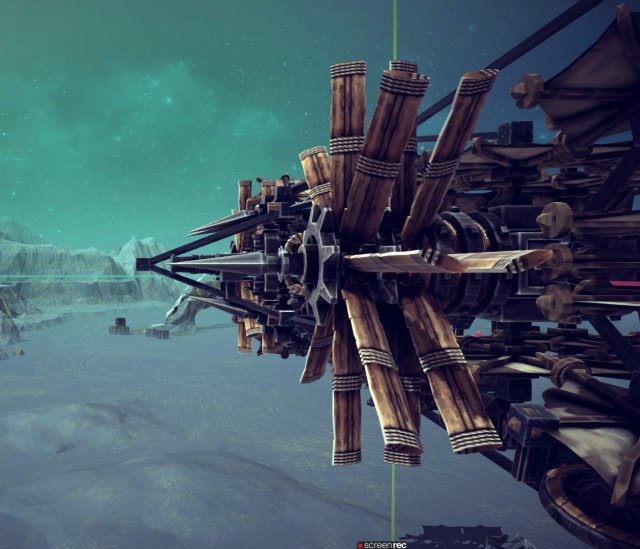 Other than that, landing gear will shift your plane’s center of mass downwards, making so it’s no longer in the same line as the center of propulsion. This once again creates torque which makes your plane pitch downwards.

There are a few ways to go about solving this pitching downwards.

1. A “Gyro” (I know they’re not gyros, but everyone calls them that)

The most heavy complex solution out of these three, and one you should use only if the pitch is extreme. It offers constant torque.

The most simple solution, simply done by rotating a wing panel or two by a few degrees. The torque you get depends on speed, so you might get a plane that pitches downwards on low speeds and pitches upwards on high speeds.

All of these solutions double the torque instead of reducing it when the plane is up-side-down. The downwards pitch isn’t overly bad, so you don’t need to use any of these.

Roll and yaw shifting and instability

They’re both usually caused by asymmetry and loose roll and yaw wing panels. If roll is extreme, the problem is likely asymmetry in broken 0 angle of attack propeller blades (if you don’t know what they are, then this isn’t the issue).

Turning with wing panels and propellers 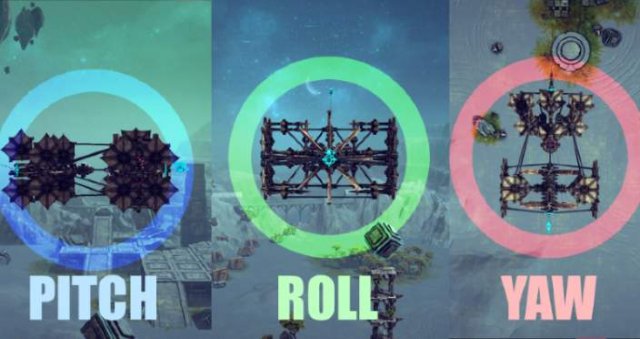 Intuitively the first form of turning you’re going to try. It’s mostly simple and looks nice. If you’re struggling with this form of turning, low turning speed is likely your problem. The further away from the center of mass your turning wing panels are, the more effect they’ll have. 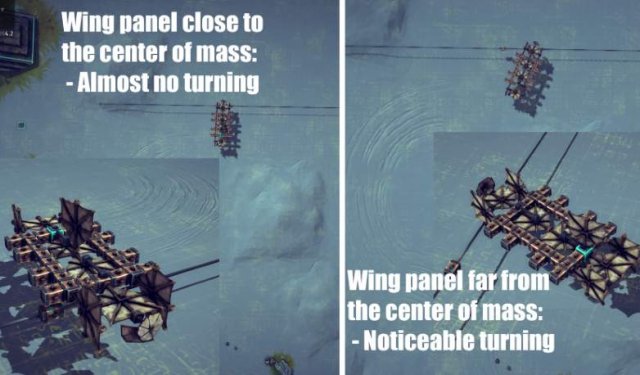 The advantage of this is that you get fast turning even at high speeds.

Also very simple turning. Gyro turning is easier to add to your plane than panel turning because to achieve a lot of turning power, you don’t need to place them far from the center, but close to the axis passing through the center mass. 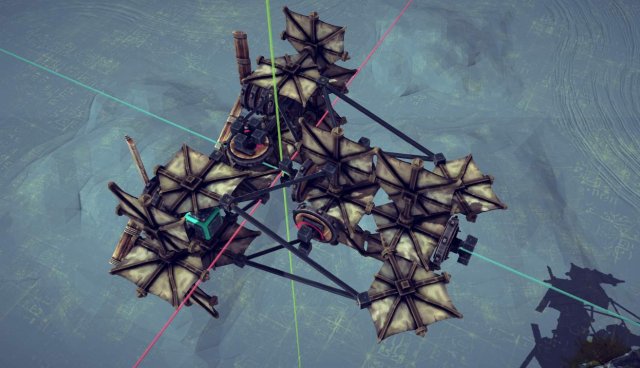 Along with being easy to attach to your plane, gyro turning offers very quick response times and is good at low speeds.

This usually only happens with yaw for me.