Just a quick and mostly useless guide on how to get the achievements.

This one is not as hard as it seems. If you’re in for this achievement, you better kill some people, they drop items and that is what you will be using. it will be way easier to get this achievement if you’re in a somewhat easy early-game battle with allies or pets, that way you can just skip the turns where you don’t have items to use.

Also, a very easy way to get this achievement is when there is a desolate battlefield with loot. there will probably be some powerful items there, and the better the items the higher chance you have at encountering some monsters, just use the items you got to kill them and skip the other turns where you don’t have items to use, you’ll probably not die.

Try to find Social Boons that help with using items.

Use Social Boons, Card Synergies and Pets to your advantage. That’s pretty much it… no real secret.

Use Perks, Grafts, Social Boons and Pets to your advantage… yeah… there’s no real single way to do it, you just kinda do it…

Cards still synergize with other cards and grafts so it’s not that hard.

Remove battle cards by talking to Rake whenever possible, Upgrade cards to get the Destroy effect. getting the Bargaining social boon helps with removing cards, and being friends with Rake too. Some quest rewards will have a “remove battle card” option.

The hard part is gettting to 7 cards, but once you’re there having less cards is better than you may think. stacking power or bleed becomes easier, most synergies become better.

There are some ways to do this, power stacking or combo stacking.

You can build a combo deck and use the card Haymaker in order to do the most damage possible.

You can also use the card “Terrorize” against enemies that constantly replace their allies. The obvious one being Bossbit, who calls 4 Feral Autodogs with 8 HP each (the exact card damage) every few rounds. Other bosses like (i may be wrong about these) Shroog and Flead Queen have similar mechanics but are harder to execute this [Terrorize gives 3 power per enemy killed!].

This one is very specific though, probably try the combo one!

Also: there is an item card called Worker’s Glove that doubles the damage of your next attack, and is dropped by Heavy Laborers like Gnak, Erbla, Chake, Gura. this will probably help you on your journey but i’m pretty sure it doesn’t stack.

Alternatively, you can follow Sakura’s steps and do 700 DMG with Smith: 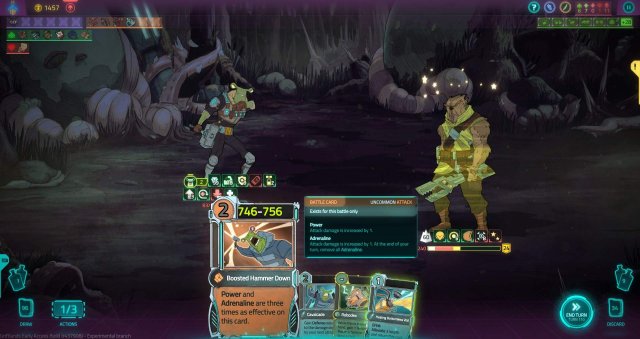 You can build a combo deck and use the card Shoulder Roll to get a lot of defense, you will also regain the combo you used next turn so just keep stacking it until you get 99!

There is also a surprising amount of Grafts and Social Boons that help with combo/defense.

There is an Unique Battle Graft in brawls called Merged Glass that cuts defense in half instead of removing it in the end of the enemy’s turn, very useful!

You can use the Bargaining social boon in order to reduce the cost of drinks!

The Bargaining Social Boon comes from maxing friendship with Dockhands like Brash, Krog, Cwoki and Minfen. It reduces most costs by 20 Shills and also, it stacks, it’s a very good social boon in general.

Killing members of a group will make other people from that same group hate you, try to kill members in all groups so all people will hate you, if you kill too many you’ll have more dead people than haters, and that’s not good. Make quest choices that make people hate you, etc…

Try having the most allies possible, use non-attack cards, perks, etc to your favor

Use Perks, make sure not to get new cards and grafts by late game because you’re probably not going to be able to upgrade them.

A rather in depth guide on how to grift as the one and only, Colossal Walking Disaster: Smith! This guides almost everything there is about Smith and how to effectively […]

There are a lot of Keywords and associated Decktypes in the game. I will try to give a birds eye overview of them. Decktypes & Keywords Overview Damage Ranges, Tresholds, […]

Guide to the Negotiation Composure (typically purple cards) is defense for your resolve and your arguments. Influence comes from green cards, and lasts as long as it’s not attacked and […]