Introduction to building Logic Gates using wires. Also delves deeper and explains how to make gates without any delay.

How to Build Logic Gates

Once you reach the levels with sensors and wires, you will quickly face challenges where multiple sensors need to control the same magnet/piston/portal in unison. Some of the possible configuration are trivial, for instance activating a piston when any sensor is active or releasing a magnet when two sensors are both active.

Any sensor will activate the piston (on the left). All sensors need to be active to release the magnet (on the right).

However, if we want to activate a piston when all sensors are active or release a magnet when any sensor is active, we have to make something a little bit more advanced.

We can use pistons to make simple logic gates. Using this approach will have some cons, but they are fairly easy to understand, so we’ll start with them.

If we want to activate a piston when two (or more) sensors are active at the same time, we can use an extra sensor and an extra piston. To simplify referring to them, let’s call our initial sensors for our input sensors and our initial piston for our output piston, while we call our extra components for our gate sensor and gate piston respectively. 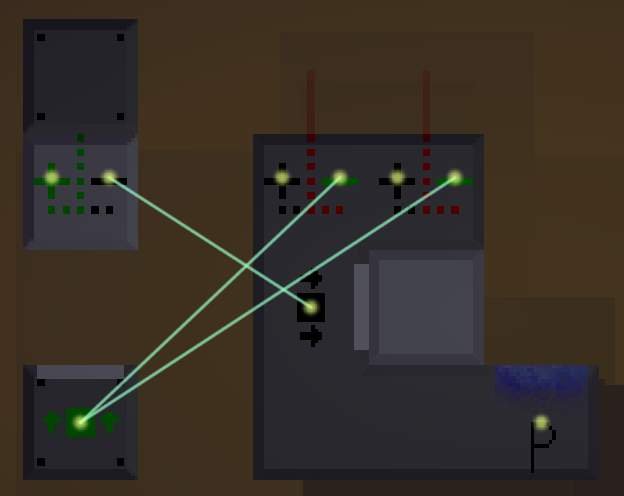 By using an extra sensor and piston we can create an And-gate. Loose pieces are coloured white. (The reason the piston isn’t extended is simply because we haven’t started the factory).

In a very similar way, we can make a magnet release if at least one sensor is active. Note that we here use the positive side of our input sensors, while still using the negative side of our gate sensor. 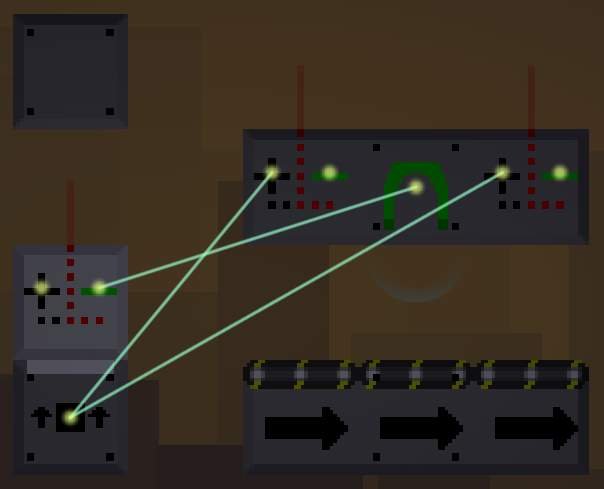 An extra sensor and piston can also become a Not-gate that we attach to the trivial Or-gate (the Or-gate is just connecting multiple positive sensor wires to the same block).

How you build the gate sensor and gate piston in relation to each other can be done in many different ways. In the image below you can see some of the possible variants.

Variants of the piston gate. Loose pieces are coloured white.

In the previous section we built an And-gate and a Not-gate. By using the positive output of the gate sensor in the And-gate we get a Nand-gate (Not and) and by using multiple input sensors (like we did) for the Not-gate we get a Nor-gate (Not or). In computer science, you can famously build all boolean (true/false, one/zero, high signal/low signal) logic by using just Nand-gates or by using just Nor-gates. That means that we can build whatever logic we want with the simple piston gate design. We might need multiple piston gates, but we can do it.

As an example, let’s try to build an Xor-gate (Exclusive Or). An Xor-gate should output a signal if any one input is active, but not if both the inputs are active. To do this we can check whether at least one input is active and not both are, or in other words an And-gate with inputs from an Or-gate and a Nand-gate. However, since our And-gate design uses inverted inputs, what we actually need is for our And-gate to get its inputs from a Nor-gate and an And-gate. 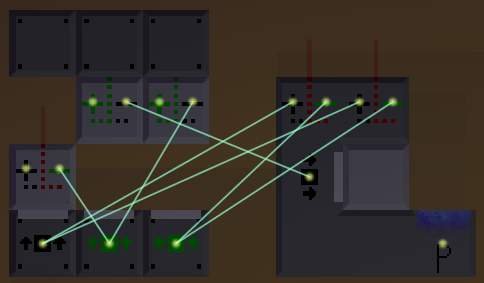 Pistons will take a single tick to extract or retract their arms. A single tick is not a long time, but sometimes timing is crucial for a factory to operate properly and efficiently. As we saw in the previous section we can chain simple gates together to make more complex logic. The combined logic of multiple gates will take a number of ticks equal to the longest chain of gates. For example, the Xor-gate from the previous example will take 2 ticks to update. It contains 3 basic gates, but 2 of them can operate at the same time.

Not only will the delay increase with complexity, the final output may flicker between unstable values and the actual values. This can happen if there are sub-chains in the logic of different length, as that means one sub-chain changes before the other.

As long as there’s a delay to our gates, we will have to consider delayed and unstable outputs that may or may not cause problems in our factories. Logic gates in computers also have tiny delays and to get around that a so called clock is used. The output values are only used when the clock pulses, resulting in any unstable behaviour to be ignored (as it happens between clock pulses). While we could create some sort of clock ourselves, we have access to something computers don’t: Portals.

By using portals we can create logic gates with a 0-tick delay. This will make all concerns from the previous section completely irrelevant. The portal gates can be slightly harder to understand than the piston ones, so it might be good to use piston gates to begin with.

The core concept of the portal gate is the fact that sensors can see through a portal, detecting what’s on the other side.

Sensor seeing through a set of portals. Note the red sensor line. 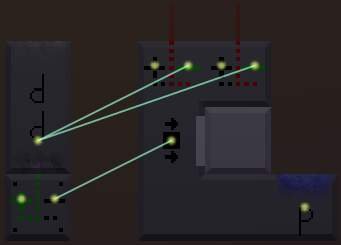 An And-gate made with a set of portals. Once both sensors activate, the portal will reactivate and the gate sensor will no longer see anything.

To make more complex logic with portal gates we can just chain them like we did with piston gates. The difference however, is that the portal version have no delay at all. 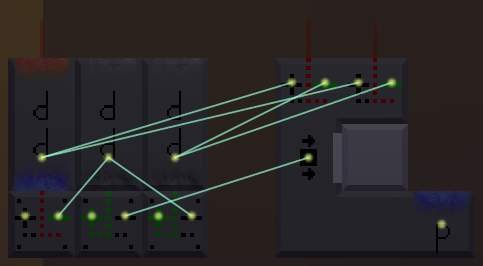 An Xor-gate made with portals. It has a delay of 0 ticks.

However, portal gates can be chained in another way as well. We can give each gate sensor multiple sets of portals. That way, the sensor’s negative side will only activate if all portal pairs are open. 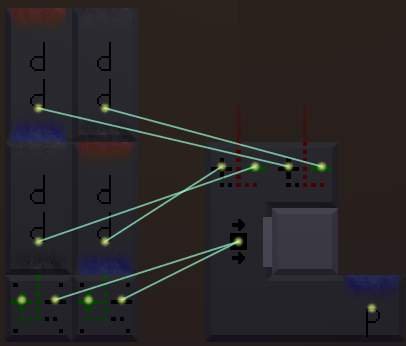 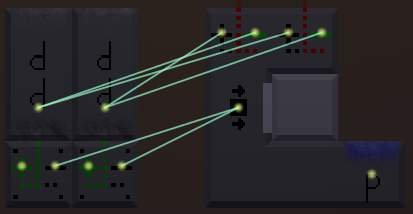 A more compact version of the Xor-gate.

A property that the portal gates have is that they are really flexible when it comes to how and where you build them. I personally like to clean up my factories once they work and pack their parts together fairly compact (how much I bother to do this varies from level to level).

When building a portal gate, the only thing that’s important is that the sensor can see an empty spot when all portals are open. 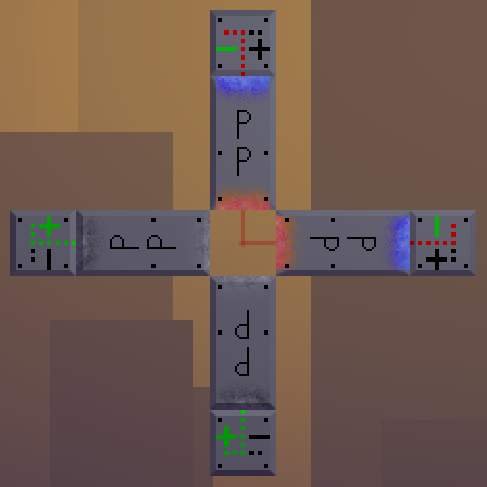 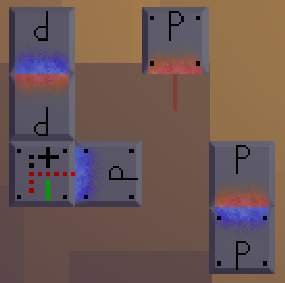 One portal gate with 3 portal pairs.

It should go without saying, that the weirder you build them, the harder it’s going to be to keep a track of what they do.

This is a solution to the level “Adder” in the “Digitalia” group. The 8 bits of the red and blue blocks should be added together and outputted with a green block. By using a bunch of portal gates, I’m able to produce a new 8 bit output every 24th tick (3 ticks per bit). 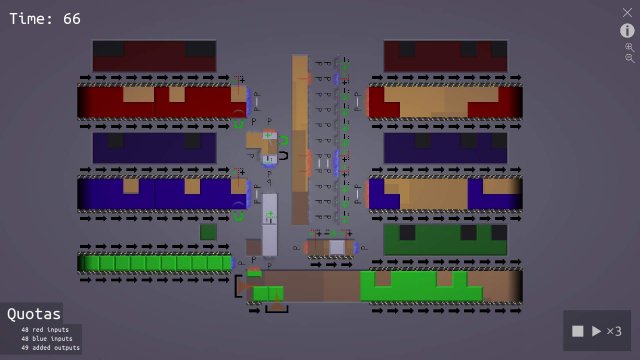