Is your 14-year-old idol seemingly incapable of becoming more “Cool?” Are you flummoxed by idols constantly losing massive amounts of Cuteness every time they get older? Here’s a full explanation of how idol stats actually work and how they’re affected by age!

How to Understand Age-Based Stat Changes

As you’re probably aware, every time an idol celebrates her birthday, her stats change, which you can see indicated on a screen that looks something like this: 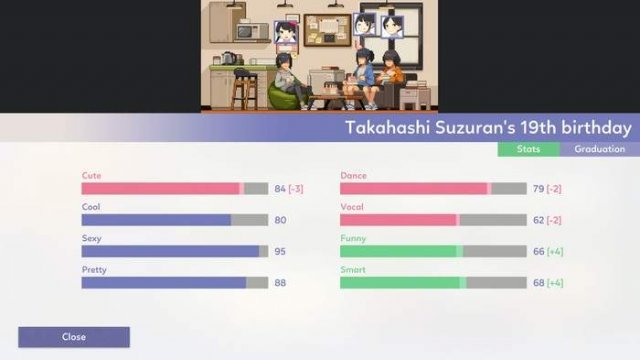 These stat changes might seem random, but they’re not! There are a number of factors that can cause an idol’s stats to change as she gets old:

The “stat caps” related to age also affect how much an idol’s stats can change through styling, so if you’re wondering why your 14-year-old seems incapable of becoming more “cool” than she currently is, read on!

The following information was announced in a developer post back when Idol Manager was in beta, but a full explanation doesn’t appear in the actual game.

“Cool” and “Sexy” attributes now have an age-based cap that serves as an upper limit for those attributes. Essentially, each idol has a “true” value for each of these stats, but the stat that you actually see on their profile may be lower (or higher) based on age-related caps.

An idol’s “Cool” or “Sexy” cannot go above a certain level based on their current age, here are the maximum values for each age:

This is why these stats can seem to grow wildly with age. Suppose an idol has a “true” Cool value of 55. When she is 13 years old, the maximum “Cool” value she can have is 20, so that will show up on her profile. When she turns 14 years old, her displayed “Cool” will change to 40. If her “true” cool value is 55, it’s not until she turns 15 years old (and the cap raises to 60) that her Cool value will show as 55 (At that point, she can also undergo styling to raise her Cool value further.). In that situation, it will appear as though she is gaining massive amounts of “Cool” every birthday until she turns 15, at which point the Cool growth will stop.

Additionally, the game has a similar mechanic for “Cute,” but in reverse: an idol’s “Cute” cannot go below a certain value based on her current age. Here is the minimum cute value for each age:

This is important to consider during recruitment when evaluating younger idols. A 13-year-old with 80 cute might seem impressive, but she’s not, because all 13-year old idols have at least 80 cute! Her “true” cute value is probably much lower, which will be quickly revealed as she ages.

Besides the age-related stat caps, idol’s stats can change in the following ways as they age: