Commanders are units that can be moved around the map and are required to lead armies. Non-commander units cannot move on their own. Managing commanders correctly is crucial to succeeding in the conquest of the land. This section gives an overview of commanders and what they can and cannot do.

Each player (except the Troll King) starts with two commanders: The main class player character and an apprentice or other type of lesser follower. There are different ways of acquiring more commanders: Random events (very rare), special recruitment, magical summons and charm spells.

By default this is impossible. But if Conquest of Elysium is started with the command line option –rename, it is possible to rename most commanders by viewing their statistics and pressing the n key. The main commander and some other special commanders cannot be renamed.

A commander is not automatically a leader. Most commanders can lead troops, but some of them cannot. Commanders who cannot lead troops often have special abilities that benefit the entire army if that commander is with them. Some commanders are fighting heroes or spellcasters, but they act as individual warriors and mages, not leaders of soldiers and thus others must lead the rank and file troops. Leaders with troops under their command have a sword icon on their commander tile. Non-leader commanders have a red X.

All units in the game have Action Points (AP), which determine how much or little they can do on a given turn. Action Points are used for everything from movement to magic rituals or using the special powers of a map structure. A normal unit has 3 AP. A slow unit has 2 AP and a fast unit has 4 AP. Slow (icon: snail) and Fast (icon: moose) as unit special abilities only have meaning on the world map and in relation to Action Points. They have no effect in combat.

The Action Points available to a commander are shown on the commander tile as diamonds. Light gray means AP available for actions. Dark gray means that the commander has not used up that AP, but he is leading troops who have already used some AP or are slower than him and cannot move anymore that turn. The dark gray AP can be used for other things such as special powers, though. Black diamonds denote used AP

Group slow units with a slow commander and fast units with a fast commander to get the maximum benefit out of the available AP. Transferring units from a commander who has already moved to a commander who hasn’t restricts the second commander by the amount of AP the transferred units have already used up. Some non-movement actions may require more AP than a commander has, in which case the commander may perform that action if he has at least one AP left, the AP that go over the limit will be deducted from their AP allowance the next turn.

The Orders dialogue box appears on the upper right corner of the world map whenever a commander is selected. The following (and other) commands may appear in the Orders box:

Transfer Units opens up the unit transfer screen. This order does not appear for commanders who cannot command troops (e.g. Old Weapon Master or Unexpected Hero).

Use Location’s Special Power activates the possible special power of the map location the commander is standing in, if it has one.

Burn Forest is a command available to armies with Pyromancers or Warlocks of Fire, some fire breathing units or commanders who carry some suitable magic item and units who know certain fire spells (e.g. Combustion). The burn forest command requires one AP and sets the forest on fire.

Forest fires can also spread to adjacent forest squares. Burning a forest transforms it to a dead forest once the fire has burned out. Forests cannot be burned in winter. Any army that contains units possessing the Fire Aura special ability at a strength of 5 or more will automatically set a forest or jungle on fire upon entering the square.

Hunt for Slaves is a command available to Priest King and Tribal King commanders of the Priest King class. The command requires 3 Action Points and summons a number of Slaves (very weak infantry units). The command can only be performed in a settlement the size of a hamlet or larger. 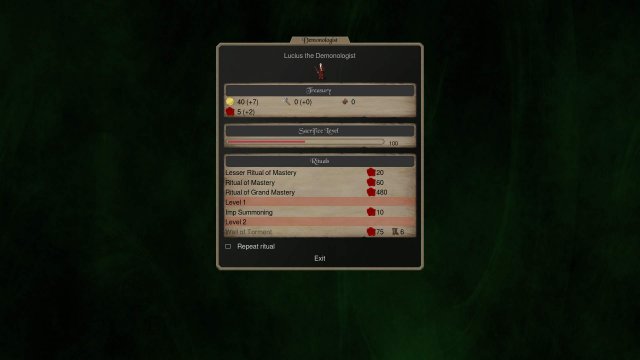 The Treasury section displays current reserves of gold, iron and special resources as well as their monthly growth rate.

Special Options contain possible class specific options on the use of special resources or other arcana. This section varies by class and does not appear for all classes or commanders.

The Rituals section lists the rituals available for that commander. Performing a ritual usually requires 1 Action Point from the commander, but some time consuming rituals require more Action Points. Rituals are usually fueled by the special resource specific to the class. The rituals that do not require a special resource usually have other prerequisites and possible penalties.

Most rituals summon monsters or other allies to serve the player. Rituals of Mastery upgrade the character, making them more powerful and possibly opening up new abilities and spells. Some classes have the option to control how much special resources they are willing to put into the ritual, thereby increasing or decreasing the chances of success. Using less resources may be outright hazardous.

Other rituals or special powers allow for things like upgrading the walls and gates of a fortress, entering other planes of existence or modifying existing map structures.

Some rituals may only be performed in certain map locations, or they may be more effective at certain locations. Performing some rituals may make it impossible for that commander to use other rituals (for example, a Necromancer who turns himself to a Vampire will no longer be able to use the Lichcraft ritual even if knows it).

A commander can also be set to repeat a ritual as long as there are enough resources to cover the cost. This reduces the need to micromanage every commander who is performing minor summonings, for example, or performing other actions that only require few resources or Action Points. A ritual will be removed from repeat if the resources available at the end of the turn would not enable the ritual to be cast again.

This section covers movement on the world map and the inputs used to give movement orders as well as the limitations of army movement.

When an active commander is selected, clicking on a map square sets his destination and clicking there again will move him and his army as far as possible along that path. You can also use the numerical keypad to move in a direction without setting any path first.

If the commander was unable to move the entire way to his destination, the path will remain in the next round. Next turn, pressing comma (,) will make him continue on his path. Pressing dot (.) will make all commanders with paths left continue their moves.

Different terrains cost a different number of AP to move into. Moving to any terrain costs 1 more AP in winter than in other seasons. Rivers and lakes can only be crossed in winter or traversed by Amphibian, Aquatic or Flying units otherwise. Special abilities may reduce movement costs, but they only apply if the entire army possesses that ability or another ability that reduces the cost with at least as much. All units under the same commander pay movement cost according to the slowest unit in the army.

The rule of thumb is that moving to a map structure costs as many AP as moving into the basic terrain of the underlying type (e.g. mines are in mountains or hills, farms on plains etc.).

The popup at the bottom of the map screen will show how many movement points it takes to enter a square, if it takes more than one. This is indicated by the number of boot symbols. One boot equals one AP in movement cost. However the extra cost of moving in snow is not indicated and you have to account for one extra AP cost if the square is snow covered.

Certain units are amphibious (e.g. Ichtyids and Krakens) and an army consisting of only amphibious units is able to enter the sea just like any other square. Floating and flying units are also able to accompany an army into sea squares, but flying units will get tired from staying over a sea square.

Other units can use ships to traverse the sea if they are small enough to fit. Only units that are normal sized (1 square large) can fit on a ship. One ship is large enough for 20 units, so e.g. 19 spearmen and 1 captain could use a ship to travel onto a sea square.

Apart from sea squares ships are only able to enter ports. It is still possible to go ashore at any land location by leaving the ship at sea however. To leave the ship and go ashore, deselect the ship in the Transfer Units screen and then go to the land square like a normal move. It is also possible to reboard the ship later on.

Flying units are very mobile and can enter almost any square for a cost of 1 AP.

Flyers can enter sea and sky squares, but they will get tired if they end their turn on one of those. If they were already tired they will float down gently to the ground instead. The tired status will disappear once the flier ends a turn on solid ground.

It is also possible to rest on a ship for size 1 fliers, regardless of whether the ship is full or not. Floating units will never get tired.

If a commander (and his army) have insufficient AP to move to a terrain, they can still move there, but the missing AP will be deducted from their AP allowance on the next turn(s). Moving to mountains in winter will cause slow units to lose the entire next turn even if they had full AP.

A commander has 3 AP and moves one square to a plain, costing 1 AP. He then moves to a mountain, costing 3 AP, but he only has 2 AP left. His army makes the move to the mountain and uses up the remaining 2 AP and he starts his next turn with 1 AP already used up and only 2 AP left. If he has slow units in his army, he will not be able to move at all the next turn, because those units will have used 1 AP out of 2 available before the move and 2 AP will be deducted the next turn.The commander can still use any special abilities even if he cannot move, though.

Moving an army to a frozen lake or river in the season of Late Winter is dangerous and might cause any non-amphibian units and commanders in the army to drown when the ice melts in Early Spring. In case your commander drowned and you had amphibian units in the army, you can go back and pick them up next winter.

Moving to an Occupied Square

Moving to an occupied square will initiate combat unless the occupying army belongs to an ally. Initiating combat will instantly use up all the APs of an army and its commanders and terminates movement for the turn. Combat is then resolved at the end of turn.

Ultimate Guide to Planes Introduction Elysium is a mystical world of secrets and a nexus of many channels of power. Beyond the barriers of movement or the senses there are […]

Conquest of Elysium 5 – How to Obtain More Rituals

Guide to Get Other Rituals How-To The way to gain new ritual is usually either by: Upgrading an existing unit necromancer => Lich. Getting access to new units (with rituals […]