Everything you need to know about the new Grades and Grade Rewards in DbD.

Grades, unlike the old Ranks that they replaced, are not used for the Matchmaking-process and merely represent a Rank-Reward System for each Ranking Season in Dead by Daylight.

Grades come in 5 Qualities, with each Quality being subdivided into 4 Levels.

A Player’s Grade is determined by the amount of Pips they obtain in a given Ranking Season.

Pips can be gained, lost, or kept at current number depending on one’s performance in ranked Trials.

Whether a Player gains, keeps, or loses Pips is determined by their performance in the Trial, as judged by the Emblem System introduced in Patch 1.9.4.

The Quality of an Emblem determines the Emblem Points it will add to the Ranking Bar displayed in the Tally Screen after a Trial: 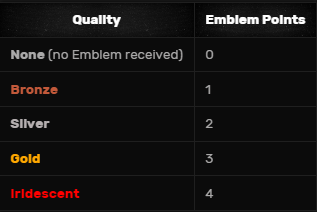 The Ranking Bar is segmented into 16 Subdivisions, reflecting that in the best case scenario, 4 Iridescent Emblems will award 16 Emblem Points.

Grades are only valid for one Ranking Seasons, which lasts for one month, after which one’s Grade is reset back to Ash IV for either side.

Once one’s Grade is reset, a certain amount of Bloodpoints is awarded depending on the Grade Level one has obtained. 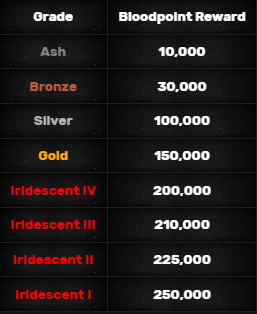 Dead by Daylight – How to Hunting the Prey (Killer’s Guide)

A few tips to help you please the unpleasant monstrosity that is the entity. ContentsThe BasicsMeet The TrapperMeet The HillbillyMeet The WraithPutting their backs against the wall: A few Tips […]

I am Guardian. I have seen a lot of guides that seem to cover only the basics of the game. This guide’s goal is to teach you about everything! Hope […]