This is a very detailed guide to the raven clan, which explains the building order, what to do in the different game stages, synergies with other clans, how to get crowns and trade victory very fast and much more! 🙂

Of course the build order can vary according to the stiuation you are facing but in general the following is a good way to go for:

Build more harbors if you have happiness problems but you don’t need to fill them with sailors. I always have only harbor with sailors but at least 2 harbors built to get enough happiness. If you have only the one coastal area at your spawn, ask your team mates if they can give a coastal area to you. 🙂

Make sure to have at least one camp in your food area where all your villagers are to be able to recruit them very fast if you get attacked. (: 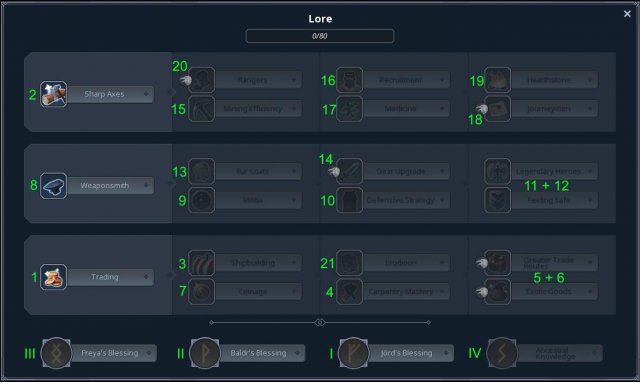 This is just a suggestion. The most effective path may vary according to the situation but you usually want to focus the trading section and unlock the military section at next. If I am in trouble with my clan happiness I get “Exotic Goods” first, if not I get “Greatter Trade Routes” (it’s the same with “Feeling Safe” and “Legendary Heroes”). I prioritze “Militia” and “Defensive Strategy” over “Fur Coats” and “Gear Upgrade” because I mainly defend my territory with towers, the jötunn and my warchief in the earlier stages, so these wisdom options are simply more useful in the beginning.

I am not sure about the economy section order because the games I play usually don’t last that long. So I don’t have much experience with it.

As Raven you are a late game clan, so in this game stage you should usually focus on completing your building process and getting a strong economy. If you need some help with that, check out the “Build Order” section of this guide. I recommend getting to scouts at the start to explore all areas next to your town hall and then returning one scout back into a villager to get a better economy. After getting the first training camp it is a good idea to get two warriors to clear all nearby wolf areas to make sure you won’t get attacked. After you ensured the safety of your clan you really should return them into villagers to improve your economy. Furthermore you should spam the “Explore Option” of your harbor to scout your enemies as soon as possible. Huginn and Munnin synergizes extremely well with Bear Clan and Wolf Clan because they can make great use out of your early enemy scouting. That’s why this special ability is your most powerful tool as raven in the early game. 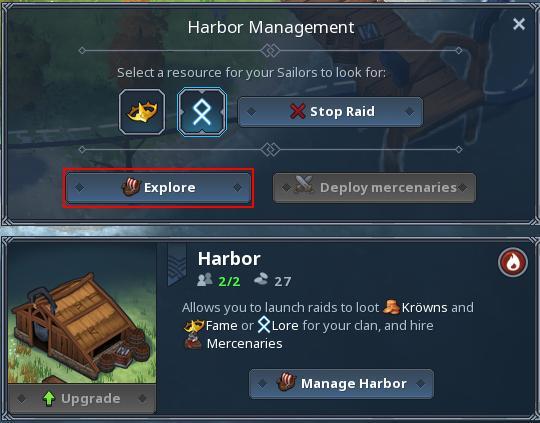 Make sure to get a loremaster after or before you build the harbor. Remember that you can use crowns to colonize new territiories though I recommend to colonize the third area with food because you need the money for your two warriors in the beginning. If no one in your clan or just your scout is hurt, you can return your healer into a villager and use her/him for other stuff.

In the year 802 you should already have a very strong economy and four trading posts. Your goal should be to start four trade routes with the giants as soon as possible because you want them as your ally. Furthermore you can earn a lot of crowns by it. Following this plan I usually end up being an ally of them at the start of the year 803. Having a jötunn in your army makes defending much easier. You can also use the jötunn to help your allies who are making use of your scouting harbors by attacking your foes. 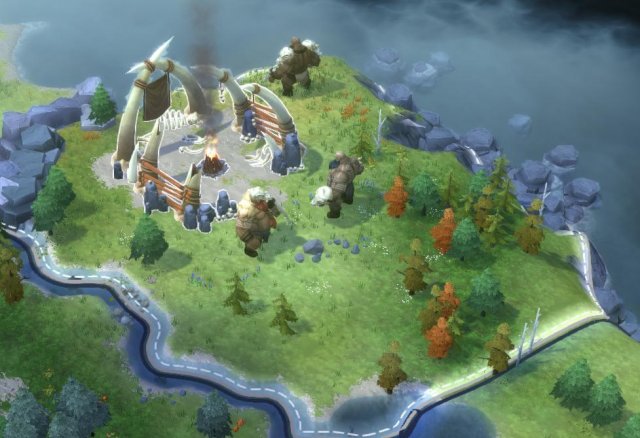 You should get “Jörd’s Blessing” in this game stage. Use its stone and iron to get a warchief, upgrade your buildings and to improve the tools of your merchants. I recommend to upgrade your brewery after your town hall, then it depends on the situation. Do you still have some problems with your happiness? Then upgrade harbors! Your happiness is fine? Then it is often a great idea to upgrade your silo and food building. Finally you should at least upgrade one marketplace and trading post standing next to each other to get the max crowns production buff for merchants in one area. After you’ve become a friend of the jötnar you should gather 6 merchants in this area. You may also mine some stone for the upgrades or buy it in the marketplaces.

You should also start building and upgrading defense towers in the year 802 to be ready for attacks of your enemies. In the year 803 you can start to build some more training camps in upgraded areas, so that you can recruit a big army if you get attacked.

Under normal conditions you have over 500 fame after getting the jötnar camp as ally, so you can deploy mercenaries. More info on that can be found in the “Mercenaries” section.

In the year 804 you should reach the conditions for a trade victory and win the game (with your team). More info on trading can be found in the “Trading” section.

You can see the conditions for a trade victory below. 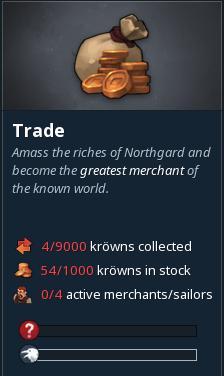 As already mentioned in the earlier sections you should have four trading posts and two marketplaces. Use the four trading posts to trade food with the giants until they are your ally. Then start trade routes with your allies and recruit 6 merchants in an area with upgraded trading post and upgraded marketplace. Also upgrade your one harbor that has sailors. Another very useful tactic to make tons of crowns is to use your crowns to buy iron and stone in the marketplace and then sell it to your allies with trading posts. This will make your crown production skyrocket. Of course you will also lose crowns buy buying iron and stone but unless you drop below 1000 crowns it won’t stop you from getting a trade victory and it will even accelerate getting one because you will produce the 9000 crowns much faster that way.

Of course it is always an option to trade with your enemies while you have peace with them but keep in mind that you will buff their economy with it and that you will get less crowns for trading with them. Furthermore it is not a very reliable crown source because u can’t use it when the war starts.

Finally I will write a few words about raven clan’s mercenaries. In my opinion mercenaries are extremely weak if you just spam them without a special strategy and let them attack completely alone. They are pretty fragile and their damage is not that high, too. Furthermore they are pretty expensive units and you must reach 500 fame to use them.

So, are they useless?

The clear answer is NO. You just have to use them in the right way. In my opinion there are mainly two ways to use them effectively:

If you get attacked by your enemies, you can not only defend your territory with upgraded towers, probably a giant, a warchief and maybe an army. You can also deploy mercenaries in your enemies’ territory to force them to use a part of their army to defend.

For a good counter attack it usually makes sense to attack the town hall with mercenaries, attack more coastal areas if your enemy tries to gather his/her civilians at the town hall to defend.

If combined with an offense of your army (pretty unlikely because you usually focus on trade victory) or allied ones, multiple mercenary attacks against the same enemy at the same time can completely overwhelm your foe because she/he has to defend multiple tiles at the same time and will be forced to split his/her army what normally putts your foe’s troops in a short-handed and critical position and turns defending in a nightmare for your enemy.

I got the death note achievement randomly in OX conquest, however I was in offline mode and the achievment didn’t unlocked, so I decided to come up with a strategy […]

This is a very detailed guide to the snake clan, which explains the build order, what to do in the different game stages, how to use the sly features of […]

This guide will teach you important tips that no one else will tell you. Tips for Newbies Once the game starts scout the areas around before building woodcutter’s hut. Look […]