We have prepared this guide based on the Perfect Visual Book to inform you of all the essential choices required to get onto each route, as well as some general pointers about how to see as much content as possible. Happy reading, and don’t forget to join our Little Busters Bookclub!

This guide is based on the flow charts available in the perfect visual books for Little Busters! original and EX. These flow charts mainly focus on essential choices, so players are encouraged to explore other options for themselves.

To complete the game, you are required to first complete the Rin1 ending, Mio, Komari, Kurugaya, Haruka, Kud to unlock the Rin2 ending and Refrain following that. Refrain is the original final route of the game; the EX routes Saya, Sasami and Kanata were added later, and all require Refrain to be completed before they become available.

For the best experience, we highly recommend starting the game from the start each time you want to try a new route. You’ll miss out on a lot of content if you just load back to an old save instead of restarting each time! And hey, you might make new progress on those minigames.

Our guide is presented in our recommended route order, but it’s quite flexible if you want to mix it up. For the maximum amount of scenes, you’ll want to follow the order of Komari -> Kurugaya -> Haruka -> Kud, and throw Mio and Rin1 wherever you want. For the most enjoyable experience, we suggest doing Rin1 first and foremost. There are many people who think Komari should go before Mio, but don’t let us tell you how to play; make the experience your own!

The Rin2 segment is only available after completing Rin1 and the 5 other pre-Refrain heroine routes.

There are extra scenes available if you choose Mio as Kud’s roommate on 18/5.

After completing Refrain, an extra scene with Komari on 21/5 becomes available. If Kurugaya is unavailable during your playthrough, she gets replaced by Rin in the scene after the final choice. This also happens if you’ve completed Rin 1, but in that case the game will still show the Kurugaya scene at least once.

Haruka’s second bad ending has a scene that will be permanently unavailable after the first playthrough. To view this scene: you must have completed the Kurugaya route; you must not have completed the Kud route, and Kanata must be chosen as Kud’s roommate on the 18th. The scene in question is a conversation between Kud and Kanata, so saving there is recommended.

There are a bunch of scenes that depend on who Kud’s roommate is. On 18/5 you can choose Haruka or Mio as the roommate; all other cases will default to Kanata being chosen. Those three can also become unavailable if you’ve completed Haruka or Mio’s route. If your chosen roommate is unavailable during the later parts of the route, their scene will be handled by Komari, so this means there are 4 variations that scene.

Refrain only unlocks after completing Rin2.

After completion, you can play through Refrain again from the start in order to get the achievement My Precious Rin. From the third playthrough and onward you are able to choose between the two epilogues.

After completing Refrain, a whole bunch of content becomes available. Most notably, all previous heroines routes are unlocked and 3 more are added. You will frequently find new content by replaying old routes.

Saya’s route involves a lot of unique mechanics most prominent of which is a dungeon crawler. Please refer to the map linked below to help you navigate. The map symbols are as follows. The S is the starting room for the floor. The T marks a trap. The star is the goal that leads to the next floor. The yellow squares are enemy rooms. White squares are just empty rooms. 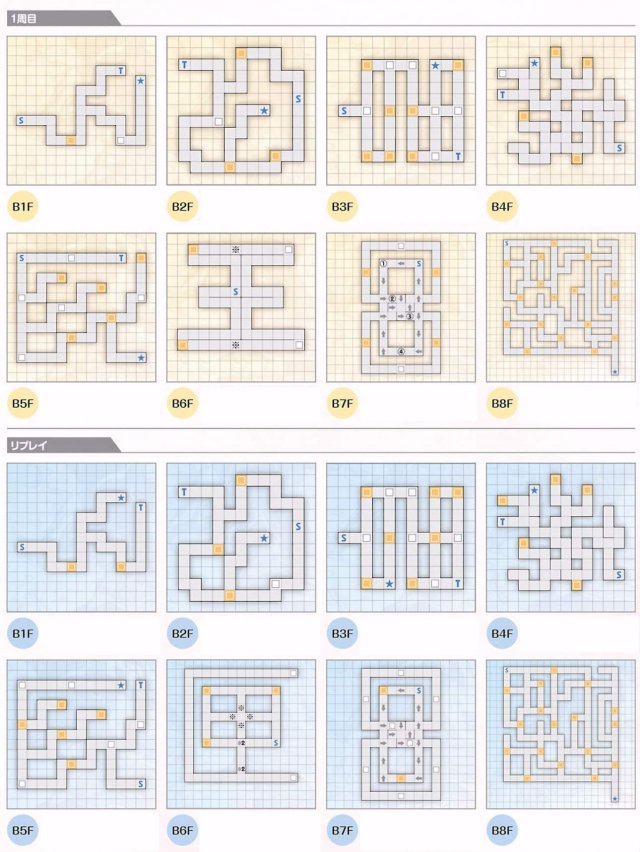 <Choices formatted like this are required death choices> When you die, just go back to the same room unless instructed differently.

After Replay, you need to start a new playthrough. Note that after completing this second part of the route you will be locked out of interacting with Saya, so saving is recommended. You’ll be able to unlock the route after completing Sasami and Kanata.

Sasami’s route is only fully available after completing Refrain.

Kanata’s route is only available after completing Refrain.

Muscle Sensation is a humorous offshoot from Kud’s route. It can only be read to completion after Refrain. While playing through Kud’s route, pick Mio as Kud’s roommate on the 18th. After that, play with Masato 3 times during common route. Masato is available for playtime on dates 16,18, 19, 21, 22, 23, and 24.

While in Kud route:

This achievement requires you to get 45+ points in the cafeteria minigame on 18/5 during Rin’s route. My best tip is to simply pause buffer by right clicking or swiping up.

The Idiot Riki/Baka Riki route is a variant of Saya’s route that slightly alters Riki’s personality for comedic effect. This route is only available after completing Saya’s route at least once. This gives you an extra CG with the crane game. You also unlock a slew of funny dialogue. If you complete this route and then go into the true Saya route, you’ll get an option to dodge Saya’s kiss. Doing so leads to some really funny scenes but also a bad ending. The choices below must be made in addition to the ones from the normal guide.

School Revolution is a secret ending to Saya’s route, and you also get the achievements The Greatest Feeling Ever… and School Revolution. This route is only available after completing Saya’s route at least once. During Replay, make sure to die 3 times each on floors 1-7. Saya will give different responses to dying, so you can stop when she starts repeating herself. This unlocks Ecstasy Mode which makes you invincible versus normal enemies and allows you to fight Tokikaze(only if you have the mini game enabled). I wish you good shooting.

A save file at the end of refrain to unlock the 3 EX routes. Other Little Busters! Guides: Complete Guide (Walkthrough). Unlisted Keyboard Controls. How To… Download the file. [UPD: […]

Little Busters! – How to Obtain Farewell and Unknown Lifeform Achievements