How to Get the Golden Spork in Mob of the Dead

The thing that makes the Golden Spork so powerful is the fact that you can kill a zombie in one hit all the way up until the end of round 33. What this means is that you can get 130 points +10 for the hit for each zombie you kill all the way up until round 34 without expending any ammunition at all, in theory. We all know that melee kills are one way to rack up points incredibly fast, which can allow us to do just about anything we want within the map.

So how exactly do we acquire this Golden Spork melee weapon in the first place?

If this is the question you’re asking, you have come to the right place.

Simply follow the steps below to learn how to get the Golden Spork and start putting it to good use right away.

The third thing you will need to do to get the Golden Spork is hit the poster in the cell block by the warden’s office. You can either throw the Hells retriever at the poster, or alternatively you can chuck a grenade at this poster.

The fourth step to obtaining the Golden Spork will be to enter the afterlife mode and hop into the portal that is in front of the warden’s office. You will now see a spoon in front of you, simply shocked this spoon and it will teleport to the table in the window near the cafeteria.

The fifth step is to head on down to the cafeteria and throw your Hells retriever at the spoon which will be located in the window at the cafeteria. Once you retrieve the spoon by throwing the Tomahawk at it you will hear a voice in the background that signifies you did it correct.

Step number six in obtaining the Golden Spork will be to head on over to the infirmary and press the X button by the single time that is full of blood. This time is located near the mystery box in the infirmary. After you press the X button by this time you will see a and come up out of the tub full of blood and begin to stir with a spoon. This is confirmation that you have completed this step successfully.

Step number seven of acquiring the Golden Spork will be to head on down to the shower or laundry room with the Vitriolic Withering and begin to kill zombies. You will need to navigate around the shower and laundry room killing zombies for quite some time to activate this step. When you have killed enough zombies in this area you will begin to hear Richtofen laugh in the background. Once you hear him laughing you will know you have completed this step. 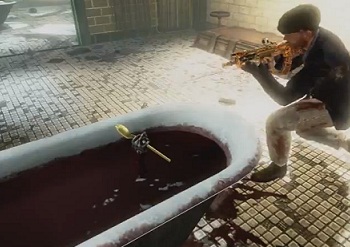 The Golden Spork should save you a lot of ammunition, and allow you to build points extremely quickly since you’ll be getting 140 points for every zombie you stab and kill.